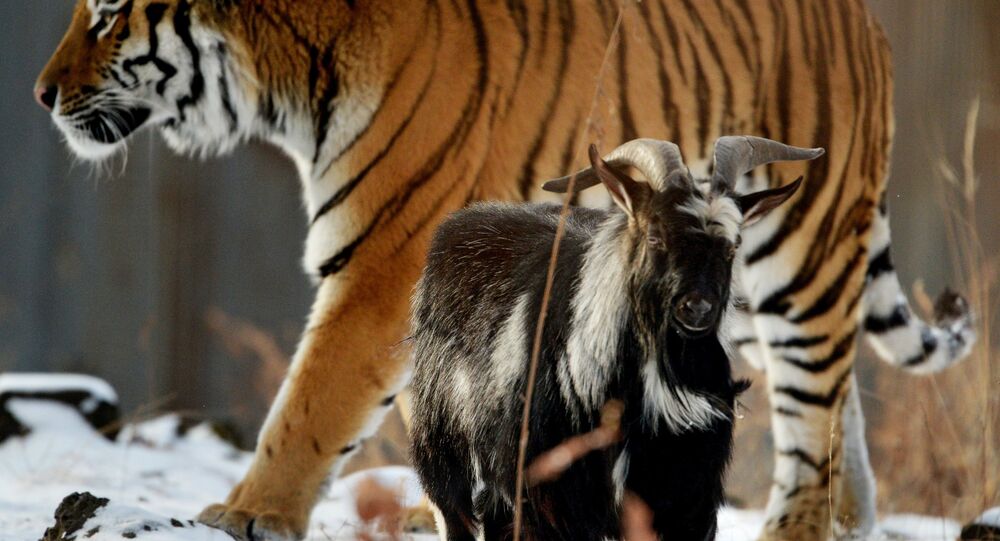 Forget about the Kardashians, America’s Next Top Model or Real Housewives, because guess what, Amur the Tiger and his best friend Timur the Goat are planning on getting their own reality show and it’s going to be amazing.

The fascinating friendship between the tiger and the goat has captured the hearts of thousands around the world, making the pair of animals true celebrities. Last week it was announced that Amur and Timur had received their own social media accounts.

As the popularity of the pair of friends from a Safari Park in Russia's Primorsky Territory keeps increasing day by day, it was decided to start a reality show showing the unique friendship between the Amur tiger and the goat, according to Safari Park director Dmitry Mezentsev.

"Cameras in their cages are being finished right now. They should be ready before the New Year," Mezentsev said, as cited by Lenta.ru.

© Sputnik / Vitaliy Ankov
Dobrynya and Other Animal Celebrities of 2015 (VIDEO)
The director of the Safari Park added that initially they'll have four cameras installed. After that people could watch live feeds on the Internet.

Amur and Timur became friends on November 26, when the goat was thrown into the tiger's cage as his would-be meal. What ended up happening, however, surprised the whole world: when Amur tried to attack Timur, the goat charged back fending off the predator. That really put off the tiger, which quickly lost his predatory interest and stopped seeing the goat as a prey. Soon after that the two became inseparable friends.