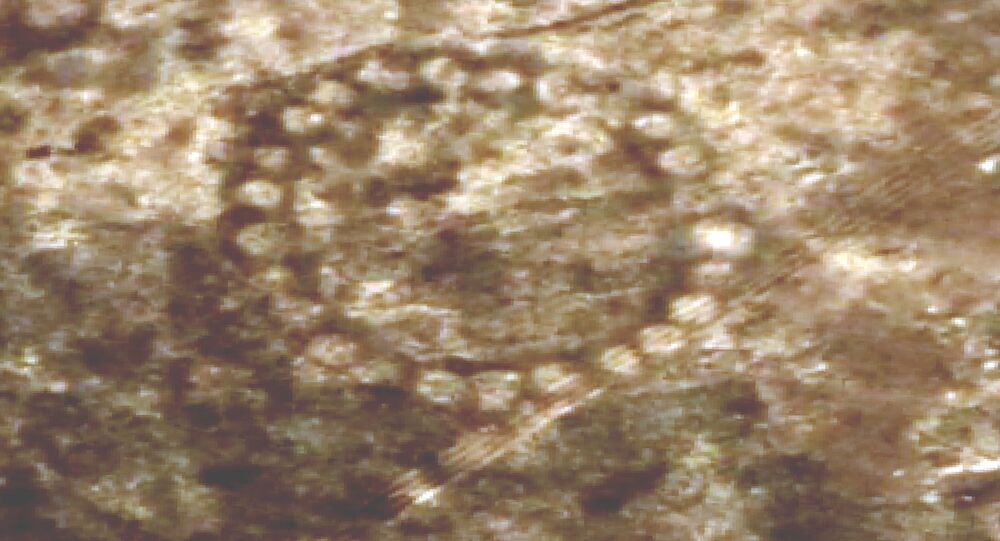 Mysterious Geoglyphs in Northern Kazakhstan Get a Boost from NASA

NASA has uploaded satellite images of ancient earthworks that were discovered by a Kazakh archaeologist.

Dei uncovered the geoglyphs, which can only be seen from the air, by studying images from Google Maps of the historical Turgay region of Kazakhstan. The north of the region is now part of Kazakhstan's Kostanay administrative region, where Dei concentrated his search for the geoglyphs.

The researcher found the first geoglyph in 2007. In an interview, he modestly characterized his achievement as a bringing together of earlier research.

"I just put together the pieces of previous discoveries, which were made by different researchers and scientific groups," said Dei.

"In February 2007 I found the first objects: the Ushtogaysky Square and Turgay Swastika. Immediately I was struck by the phenomenal scale of the constructions: the side of the square is 287 meters, one quarter larger than the area of the base of the great pyramid of Giza. It is made from exactly 101 mounds."

Dei's hypothesis is that the geoglyphs were a kind of ancient solar calendar, used by settlers who had traveled from western Siberia to make observations of the horizon.

The researcher, who was inspired to search for the geoglyphs after watching a documentary about the pyramids of ancient Egypt, sees similarities to the Chankillo complex of ancient monuments in the coastal desert of Peru, which dates back more than 2,300 years.

© NASA
Big Ashutastinsky Cross
Some preliminary studies of the site in Kazakhstan date the earliest of its constructions to around 8,000 years ago, pre-dating even the pyramids.

"I think everything began in Altay, 13-20 thousand years ago," says Dei, whose research project on the earthworks has been published online by the University of Pittsburgh. His intriguing theory is that the earthworks were made by tribes who were some of the earliest settlers to the Middle East and Europe.

© Flickr / Andrea Heribanova
Planned Australia Highway May Destroy Aboriginal Site ‘Older Than the Pyramids’
"In Turgay, faced with particular conditions, a part of the Altaiy tribe laid the foundations of a new civilization around eight thousand year ago."

"A flow of salt water from the Aral Sea around 6,400 years ago rushed north into the Turgay hollow, and practically destroyed the oasis in the Turgay basin. Neolithic Mahandzhar tribes made their way west. Some crossed the Caucasus and invaded the Middle East, 6,000 years ago, coinciding with the appearance of the ancient Sumerian civilization."

"Some of these tribes moved further to the west, and 5,000 years ago the Egyptian civilization suddenly appeared."

"Then tribes moved further across the territory of northern Africa to the Strait of Gibraltar, overcame it, and began to settle in Europe," said Die, who is now working on a nascent five-year $1.5 million project to unravel the mystery of the earthworks.

Kazakhstan May Use its Own Satellites to Track Drug Flows, Terrorists