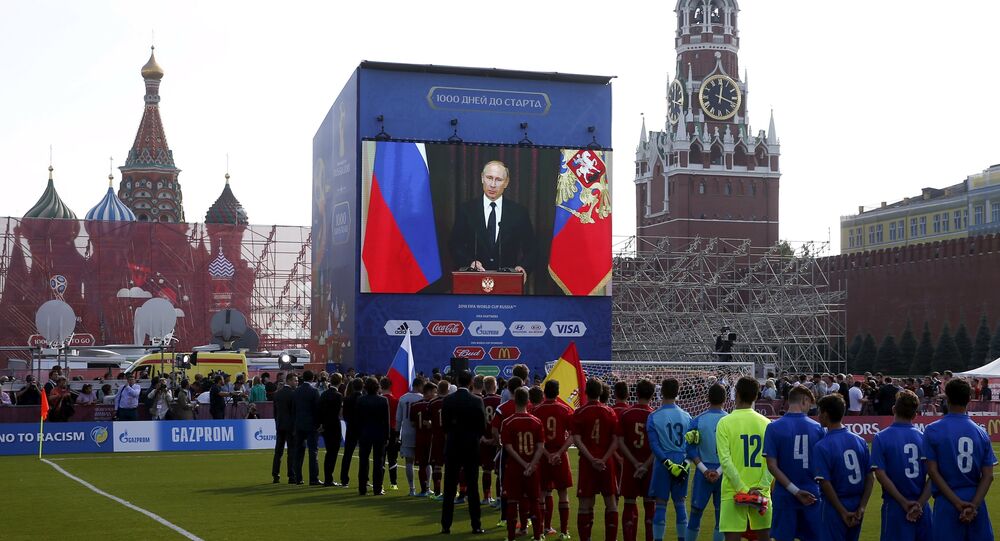 A ceremony marking 1,000 days before the start of the 2018 FIFA World Cup was held on Red Square in Moscow on September 18.

Russia on Friday launched a 1,000-day countdown to the start of the 2018 FIFA World Cup to be hosted by the country.

"A thousand days before the world football celebration, and an important and hard work lays ahead of us during all this period," Shuvalov said at the ceremony.

© Sputnik / Sergey Guneev
FIFA Confirms Full Support for Russia 2018 World Cup
The official pledged that all infrastructure will be in operation on time and that the logistical infrastructure for the competition will not fail fan expectations.

From June 14 to July 15, 2018, Russia will host the FIFA World Cup for the first time in history. Russia designated 11 cities to host the games and started building or upgrading stadia in each of the chosen locations. Moscow, St. Petersburg, Sochi, Yekaterinburg, Kazan and Kaliningrad are among the cities that will host the competition.

The FIFA delegation visited five stadia in person, while the rest were assessed via graphs and other related visual aids, and it was very much satisfied with the progress in the preparations that has been achieved, Smith said at a press briefing.

The hosting of the 2018 FIFA World Cup was awarded to Russia in December, 2010. This will be the first World Cup held on the territory of the former Soviet Union and the first to be held in Europe since 2006 when the event was held in Germany.