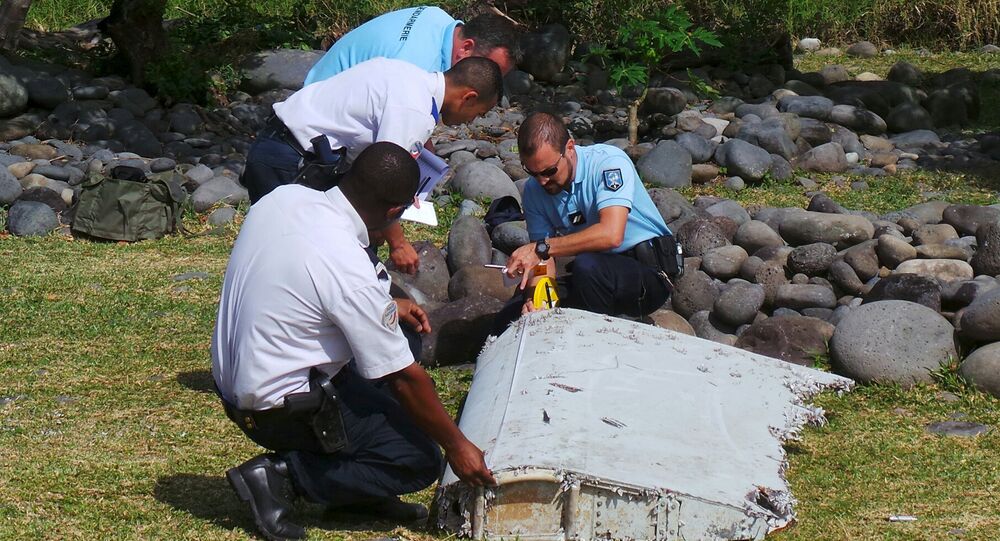 As it appears increasingly likely that the debris found on a remote island in the Indian Ocean belonged to missing Malaysia Airlines flight MH370, the newly discovered piece will be flown to France for analysis by French air accident authorities.

Photographs and witness testimony of the debris found on Reunion Island Wednesday have given new life to the search for the aircraft that disappeared from radar on March 8, 2014. According to officials with Boeing, the piece appears to be a flaperon, a moveable wing section which manages lift.

That would be consistent with the design of the Boeing 777, the same model as MH370.

An identifying mark reading "BB657" was found on the debris, and French officials hope to use that mark as a more accurate determiner of whether the part did, in fact, belong to a 777, and specifically, flight MH370.

According to Boeing, "BB657" corresponds with maintenance numbers for components of its 777.

The piece will arrive in Paris on Saturday and then be sent to Toulouse to be examined by the BEA, the French agency responsible for investigating aviation accidents.

Boeing investigators say they are confident that the component number matches a 777, and according to the Aviation Safety Network, MH370 is the only 777 to have ever gone missing.

"The Reunion islands are a very long way from the search area, but it is consistent with the work that has been done in identifying the current search area, the satellite interpretations of the route path that the aircraft is expected to have taken," Warren Truss, Deputy Prime Minister of Australia, told the Guardian.

"So a discovery of wreckage in that area would not be inconsistent with that advice."

While remaining optimistic, Malaysian Prime Minister Najib Razak has cautioned against speculation until the debris can be examined thoroughly.

Other experts have made similar statements.

"The serial number information should be fairly easily accessible but we should be cautious," David Gleave, an air accident investigator, told the Guardian. "It’s not unknown for very strange things to occur during crash investigations, and you would want to eliminate all possibilities."

"A lot of aircraft parts look very similar to other aircraft parts, and these things take time to confirm – given the amount of grief we really must make sure," he added.

Gleave also floated the possibility that the part could have been planted as a hoax.

The part was found by individuals cleaning a beach on Reunion Island. Local authorities conducted a further search of the coastline for signs of additional debris, but found none. Authorities did, however, discover a “closed, small” suitcase “in a very bad condition” along the same coastline on Thursday morning.

MH370, en route from Kuala Lumpur to Beijing, went missing with 227 passengers and 12 crew members onboard. An exhaustive search failed to turn up any evidence of the aircraft, with most of the rescue operation focused on a 46,000 square mile stretch of water off the west coast of Australia.

Experts say debris could have easily made its way to Reunion Island in ocean currents.

MH370 Mystery Solved – Or at Least, Mathematicians Say So