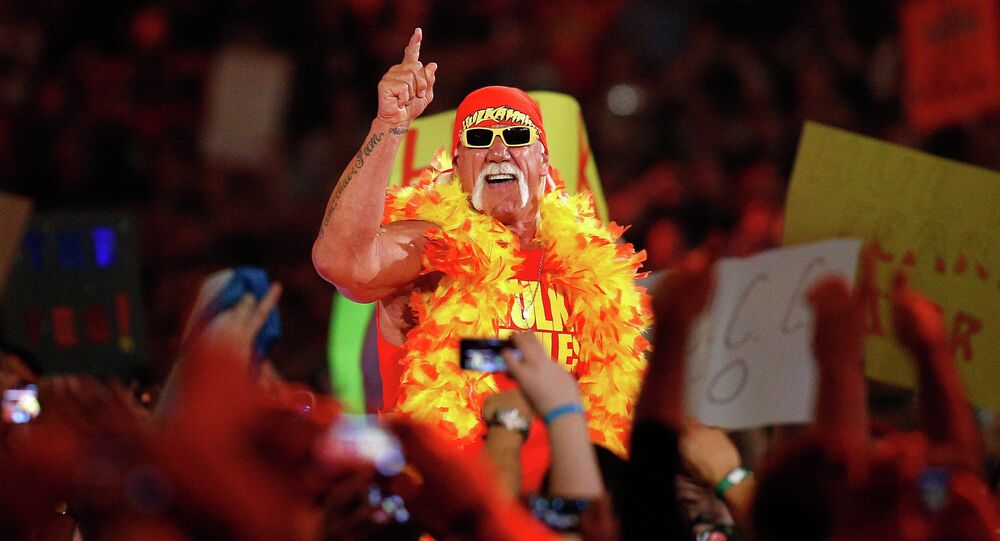 A recently surfaced audio recording has embroiled one of the most recognizable faces of professional wrestling in a new scandal.

"On a WWE.com, Hogan is no longer listed on the WWE Hall of Fame page, and all of his merchandise has also been removed from WWEShop.com," reads a report from the Wrestling News Source.

That’s a pretty shocking announcement given that World Wrestling Entertainment essentially owes its fame to the mustachioed blond – Terry Bollea by birth. What could the Hulk have done?

Early reports suggested the WWE was scrapping its star due to comments he made during an interview with DJ Whoo Kid on the radio show Whoolywood Shuffle. During that broadcast, the pair discussed an infamous moment when Booker T, an African American wrestler, called Hogan a "n*gger" on live television.

"Well, Booker T used to do that to me, and every time I pull up YouTube there’s that famous thing with Booker T and his brother is there and they’re all talking trash, and Booker T says, 'I’m coming for ya Hogan, you n*gger' – and not 'n*gga,' he goes 'n*gger,'" Hogan told DJ Whoo Kid.

He went on to describe his time going to clubs with rappers while living in Miami.

"And everybody down there – Lil Wayne, Birdman – they’re all calling me ‘n*gga,’ and then I started sayin’ it. And I always said it, but now all of a sudden I get heat when I say it, and they say, 'Hogan, you can’t say that,' so I say, 'Why can they say it to me then?'"

There are, of course, any number of reasons why a man as undeniably white as Hulk "Terry" Hogan should not use the n-word, no matter how affably he means it. There’s no need to lecture the Hulkster on white privilege, reappropriation, and America’s troubled history with race, as I’m sure his publicist has already done that, but in short, you just can’t use that word.

Still, one could argue that the Whoolywood Shuffle interview, tone-deaf as it may be, is more a discussion about race, and the way privilege can blind people to the realities experienced by minorities. Was Hogan expressing racial hatred in the interview, or expressing his own bone-headed confusion about race?

Of course, we now know that the Whoolywood chat isn’t what shocked the WWE into action. It gets much worse.

Hogan is currently involved in a $100 million personal injury with Gawker Media after the website released a sex tape involving the wrestler. The video allegedly shows Hogan with Heather Clem, the wife of his friend Bubba "The Love Sponge" Clem (we couldn’t make this stuff up, people).

Audio from that video obtained by the National Enquirer and Radar details a conversation between Hogan and Clem regarding Hogan’s daughter, Brooke. In the tape, Hogan fears his daughter may be sleeping with a "black billionaire guy."

"I mean, I’d rather if she was going to f*ck some n*gger, I’d rather have her marry an 8-foot-tall n*gge worth a hundred million dollars! Like a basketball player!" Hogan reportedly says.

There’s not a lot of nuance you can work into that. That’s not "a little racist," Hulk. That’s very racist.

"WWE terminated its contract with Terry Bollea (aka Hulk Hogan)," reads a statement from the wrestling organization. "WWE is committed to embracing and celebrating individuals from all backgrounds as demonstrated by the diversity of our employees, performers and fans worldwide."

Hogan was also quick to issue an apology.

"Eight years ago I used offensive language during a conversation. It was unacceptable for me to have used that offensive language; there is no excuse for it; and I apologize for having done it," he told People magazine. "This is not who I am. I believe very strongly that every person in the world is important and should not be treated differently based on race, gender, orientation, religious beliefs or otherwise."