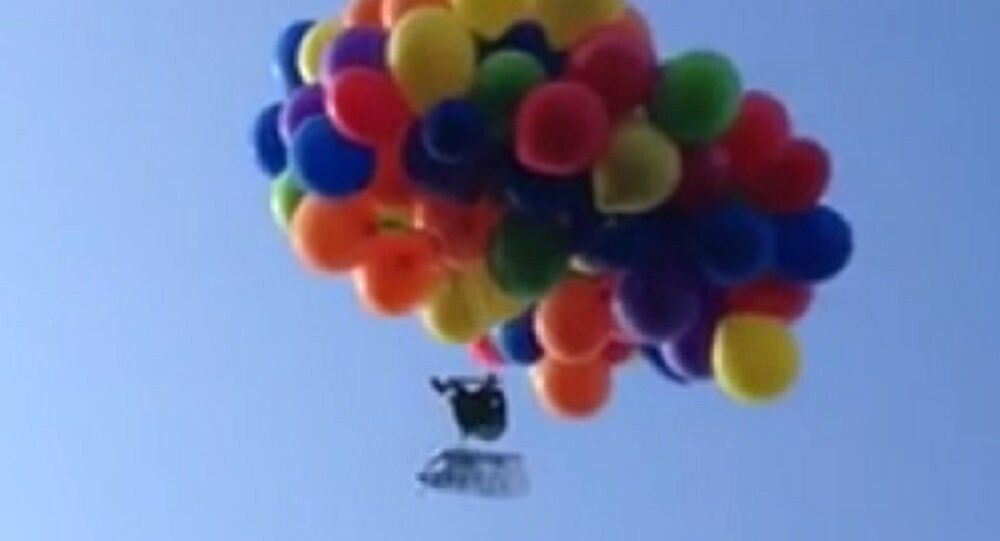 Up Up and Away! Canadian Balloon Lawn Chair Pilot Lands Charges With Police

Canadian police have charged a man who used helium ballons attached to a lawn chair to soar into the skies over Calgary.

YouTube / Raphael Langumier
Watch as Four-Year-Old Takes Ride in Stunt Plane
Daniel Boria, 26, wanted to parachute into the Calgary Stampede on Sunday to promote his cleaning products company. He attached a plastic lawn chair to about 110 balloons, sat down, and lifted up into the clouds, floating near the festival.

"You can spend the same marketing dollars on a billboard or a commercial or you can fly a balloon up in the air and jump out. It just seems like more fun, right?" Boria told reporters.

Boria had hoped to parachute himself into the Calgary Stampede grounds, where hundreds of people were attending the festival. But he landed a few kilometers to the southeast of the city, as the wind blew the chair away. The man said he had sprained his ankle while landing, but that wasn’t the end of the story. Police tracked the stuntman and charged him with one count of mischief causing danger to life and mischief causing damage to property under $5,000.

"I don't think any publicity stunt is worth your life, nor obviously the life or property of somebody else," Inspector Kyle Grant claimed.

The man said he had spent $20,000 to prepare the stunt, but it may cost him much more in the end. He admits it was unreliable to do the stunt and now calls for people not to emulate the joke because “somebody is going to get hurt.”

The Calgary Stampede is an annual rodeo, exhibition and festival held every July in the city of Calgary, Canada, attracting over a million of people every year.

New Yorker Bulldozes His Home While Wife is Away

Watch What Happens When Coke Meets Mentos in a Bathtub