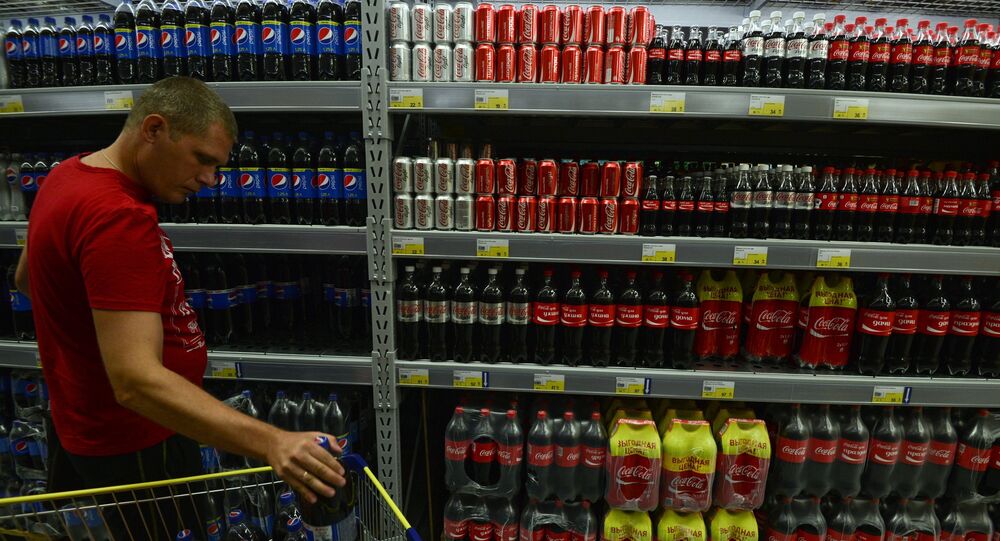 Sugary beverages including soft drinks, sodas, sweetened iced tea, fruit drinks, and sports or energy drinks might be the cause of up to 184,000 deaths a year worldwide, according to recently-published research in the American Heart Association's journal, Circulation.

Sugary drinks are killing around 184,000 people each year, according to a recently released study.

© AP Photo / Wilfredo Lee
Coca-Cola Pays Dietitians to Present Soda as Healthy Snack
The report analyzed the global risks of death due to diabetes, cardiovascular diseases and cancers linked to the consumption of sugary drinks.
According to the estimates, most of the 184,000 global deaths are from people who die of diabetes due to the consumption of “sugar-sweetened beverages” (SSBs).

"Many countries in the world have a significant number of deaths occurring from a single dietary factor, sugar-sweetened beverages,” said study author Dariush Mozaffarian from Tufts University in Boston.

Another 45,000 die globally from cardiovascular diseases caused by sugary drink consumption, and 6,450 people die from cancers linked to sugar-laden beverages.

“It should be a global priority to substantially reduce or eliminate sugar-sweetened beverages from the diet,” Mozaffarian added.

The research examined 62 dietary surveys from more than 611,000 people, conducted between 1980 and 2010 across 51 countries. The participants represented almost two-thirds of the world's adult population.

YouTube / passando na hora
Avalanche of Soda Bottles Fall on Pedestrian From Out of Control Truck
When it comes to the total number of deaths annually, the United States is at the top of the list, with 25,347.

However when it comes to the actual death rate, Mexico comes out on top – with 404.5 deaths per million adults.

Most of the deaths are concentrated among adults aged 20 to 44 years of age in low and middle income countries, say researchers. Britain has 1,316 deaths per year, with an estimated mortality rate of 30.5 per million adults.

According to a fact sheet published by Harvard University, ‘Sugar drink supersizing and the obesity epidemic’, drinking just one can of soft drink a day can lead to significant health problems,

“Two out of three adults and one out of three children in the United States are overweight or obese, and the nation spends an estimated $190 billion a year treating obesity-related health conditions,” it stated.

“There are no health benefits from sugar-sweetened beverages, and the potential impact of reducing consumption is saving tens of thousands of deaths each year,” Mozaffarian stated.

Study: US Adults Get Nearly as Many Calories From Alcohol as Soda

Awesome Game of 'Truth or Drink' With Parents

How Far Will You Go for a Drink? Check Out the World's 5 Most Remote Bars