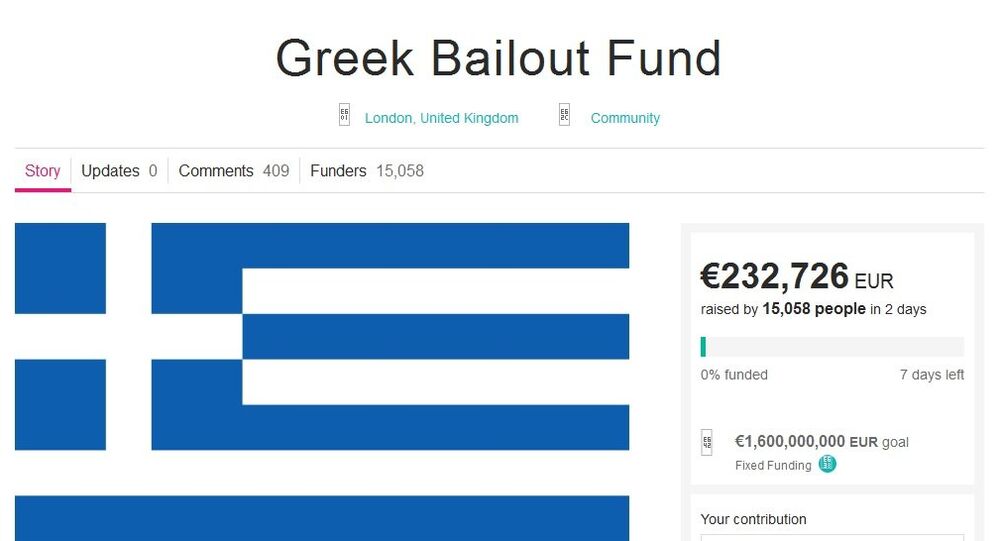 The Greek economic crisis is an issue that has been talked about over and over again for the past several years. There were numerous meetings, economic proposals, austerity plans, bank interest rates hikes and other hard-to-understand-for-average-folks financial schemes. And let’s not forget the tears, the many tears of the Greek people.

Thom Feeney, originally from York but currently residing in London, has had enough. He came up with the amusing idea of letting Europeans sort the Greek crisis out by crowdfunding and subsequently paying off the entire amount of the Greek government's debt — that is no less than €1.6 billion ($1.8 billion).

"The European Union is home to 503 million people, if we all just chip in a few euro then we can get Greece sorted and hopefully get them back on track soon. Easy," Feeney wrote on Indiegogo, an international crowdfunding website.

© REUTERS / Alkis Konstantinidis
This is What Greece's Public Debt Profile Looks Like
The cause has already received more than €180,000 and has been supported by over 10,000 people at the time of publication in less than two days.

To raise €1.6 billion and save Greece, it only needs a little over €3 from each European citizen. It's less than a pint of beer in London, Feeney argued.

Greek Prime Minister Alexis Tsipras is allegedly aware of the cause and even promised to send everyone who pledges €3 a postcard. Those who contribute €6 will receive Feta and Olive salad, those who pledge €10 will get a small bottle of Ouzo sent to them and those who are desperately willing to save the Greek economy by donating €25 will receive a bottle of Greek wine, the website said.

I'm donating €3 (not even the price for a pint) to help save Greece, and so should you! https://t.co/2qWRU1IngP #GreeceCrisis @thomfeeney

If #crowdfundgreece actually works, @ThomFeeney will be a living legend. Good luck to you! The first real test of the power of social media!

On a final note, the enthusiastic young man promised that all of the raised money will go to save the Greek people and all products will be 100 percent Greek.

This is a unique opportunity for Europeans to take decision-making into their own hands by determining the future of Greece. If the entire sum is raised it would be unprecedented. For some of the richer folks out there it is a golden opportunity to cement their names into the history of Greece by saving the cradle of democracy. If some billionaire donates millions to the cause and ends up saving the Hellenic Republic, he/she could easily become a modern-day Zeus, or Hercules no less.

US Stocks Rally as Greece Asks EU for New Bailout

Greece Officially Requests No Aid, But Russia’s Assistance Would Be 'Handy'