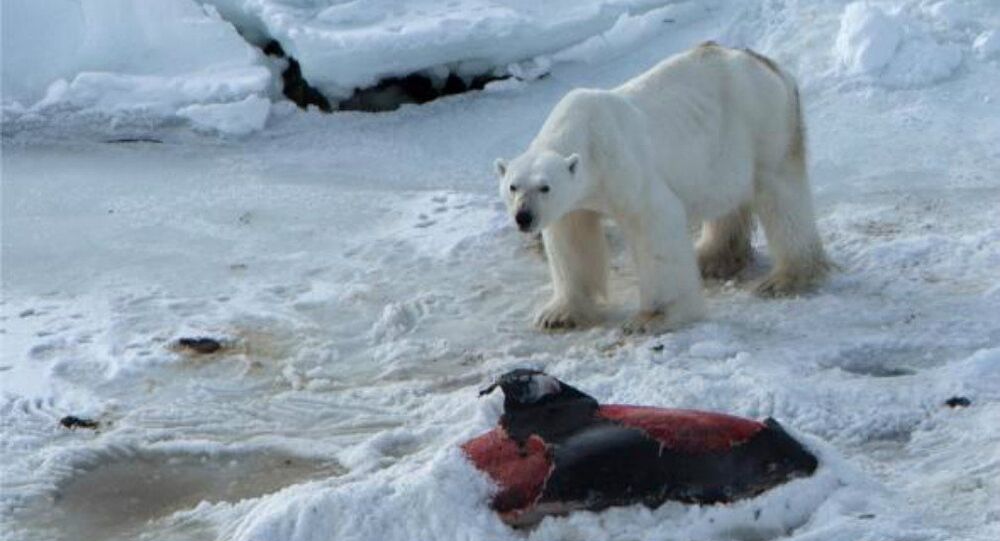 Norwegian scientists have seen polar bears eating white-beaked dolphins in the Arctic for the first time in history; researchers claim that global warming is to blame.

© Flickr / eliduke
Scientists Discover Water Under Mysterious Antarctica Glacier
The first-ever recorded examples of polar bears eating white-beaked dolphins in the Arctic have been revealed by a study conducted in Norway's Svalbard Archipelago; scientists point to climate change, which is prompting the bears to change their diet.

Polar bears are known to feed mainly on seals, deer and rodents; however, Jon Aars, of the Norwegian Polar Institute managed to photograph dolphins being devoured by a polar bear.

"It is likely that new species are appearing in the diet of polar bears due to climate change because new species are finding their way north," he was quoted by the news agency AFP as saying.

The study, which was published in the Polar Research Journal, referred to the rapidly retreating Arctic ice shelves, which scientists say have enabled the white-beaked dolphins to migrate farther north to an area they would normally avoid until summertime.

The first incident was documented by Aars after his team discovered a polar bear feeding on the carcasses of two dolphins in April 2014.

According to scientists, the bear probably killed both dolphins when they surfaced to breathe through a hole in the Arctic ice.

© REUTERS / Laurent Mekul/Handout via Reuters
Red in Tooth and Claw: Scientists Reveal Dinosaurs Had Blood Like Ours
An additional five cases of dolphins stranded or captured and then eaten by polar bears were reported earlier this year.

Most bears appeared to be well-fed, but one, which was visibly skinny, tried to cover a dead dolphin under the snow, a phenomenon Aaes said they have never seen before.

He explained that the bear "tried to cover the dolphin in snow in the hope that other bears, foxes or birds would have less of a chance of finding it; maybe to be able to eat it a day or two later, once he had digested the first one."