The Kremlin has been training Filya the Filin (Phil the Eagle-Owl) for two years, hoping to find a new way to gain respite from its constant crow problem. Now, the advisor to the head of the Kremlin's security service reveals some details about the project.

The Moscow Kremlin enlisted Filya, an eagle-owl, to combat crows in the historic fortress, museum and government building complex, advisor to head of the Federal Protective Service Sergei Devyatov told journalists on Tuesday during the presentation of his new book about the Kremlin.

Crows have historically been a problem for the Moscow Kremlin, as they not only damage features on historical buildings, but also disrupt the work of the government buildings. According to one account, a crow flew into the open window of one of the offices and began picking up papers and throwing them out the window, watching as they fell on the head of a hapless guard below. 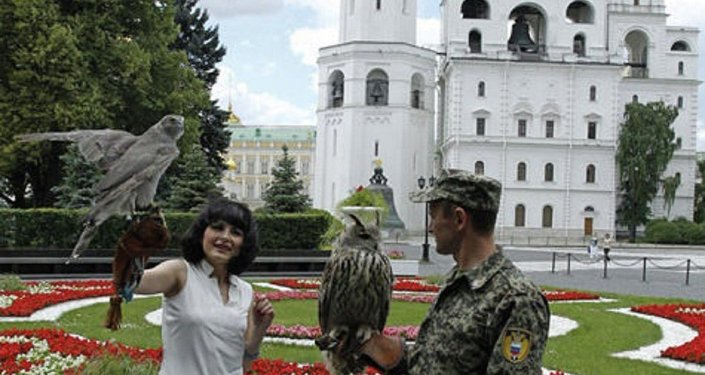 Courtesy of Federal Protective Service
Filya the eagle-owl and one of the Kremlin's falcons.

The Kremlin's ornitological service began its work in 1973. Initially enlisting falcons, it later switched to hawks. The falcons were released and nested in Moscow's hills and high-rises, including the Moscow State University and the Gorky Park area. The service later switched to using eagle-owls in a bid to replace the hawks, which are generally nocturnal.

"Right now there are hawks at work, but if there are a lot of crows against one, they could peck it to death. Hawks and falcons can only attack from the top," Devyatov said.

Eagle-owls, a relative of the North American horned owls, are similar to night owls but can be diurnal, hunting during night and day, unlike other owls which mostly hunt during the night. Their calls include the deep "ooh-hu," the laughter-like "OO-OO-oo," and a harsher "kveck-kveck."

During the conference, it turned out that Filya, the Kremlin eagle-owl, is in fact a female bird.

"We don't yet know if it's a boy or a girl. [Person in the audience says it's a girl.] Oh, it's a girl? It takes a while for sexual characteristics to develop in these birds. We got it as a little puff ball. How will he call him now? We used to call him Filya… Well, there's Manya [diminutive of Maria]," Devyatov said.

In its first months in the Kremlin, Filya was bullied by the crows, who likely saw the threat that was approaching them.

"Eagle owls are crows' natural enemies, especially ours, who was bullied by the crows during his childhood," Devyatov said.

To settle, the Kremlin would likely have to find Filya a mate and create a habitat for the eagle-owls which would make the crows leave the complex.

"If we can make it settle, the crows will leave by themselves. Probably not from one eagle-owl, but when an eagle-owl nest appears in one place, crows leave it," he added.

There are many advantages to the eagle-owls over both night owls and birds of prey such as falcons thanks to their quiet silent hunting habits and for Filya, a fierce hatred of the crows.

"Of course the eagle-owl is quiet, it doesn't flap its wings, it flies silently. It's all-weather, any time of day, unlike night owls that are nocturnal it's always at work. It flies slowly above a flock, and what it can reach it reaches," Devyatov said.

The head of the Kremlin's ornitological service described the eagle-owl's crow hunting habits to Moscow television channel TVC in 2013, a few months after the Kremlin got the baby eagle-owl and began training it.

"The crows see him. They crowd over him, caw, try to somehow chase him away, but understand that it's impossible. They don't fly near him but they don't stay to spend the night. Staying in the night, in the twilight, when his time comes, he will fly and take away any one of them," Yulia Karaseva the head of the Kremlin's ornitological service told television channel TVC.