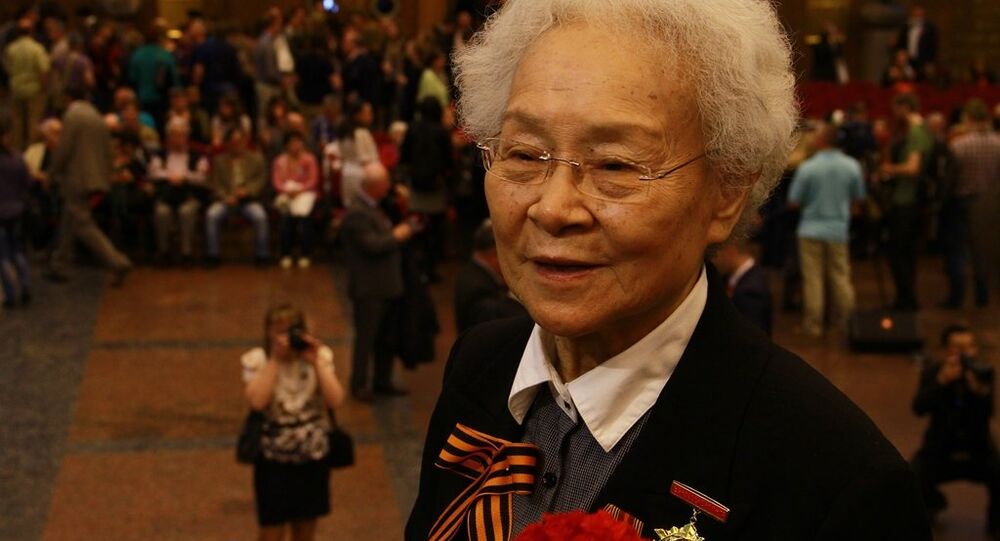 Liu Aiqing, the daughter of Liu Shaoqi, a former Chairman of the People's Republic of China, shared with Sputnik her memories of life in the Soviet Union during the Second World War.

Liu was sent to Ivanovo, about 300 kilometers northeast of Moscow, in 1939, in the midst of Japan's war of aggression against China, which began in 1937. Her mother, a revolutionary, had died earlier in a Kuomintang prison, and her father, an officer fighting in the Chinese Red Army against the Japanese, had no time to take care of her and her two brothers.

"One day he told us that on the northern border of China there is a very big country, and you will go there. And so my brother and I went to the Soviet Union. I was 12 years old. With us were three other kids," Liu recalled.

© AFP 2019 / FREDERIC J. BROWN
Chinese Honor Guard Arrives in Moscow for First Time Ever
"We were on the road for three months, and came to Ivanovo shortly after the beginning of the winter holidays. I was worried that I would have to start my studies from the beginning. After all, I didn't understand anything in Russian…A year later my younger brother also came to Ivanovo. We were happy to be together, and I was very happy knowing that I had the opportunity to study. In China too I had wanted to learn, but there was no opportunity. The staff at the children's home was very good. Everyone was friends. Chinese or not, we did not discriminate. We were all the same, and we lived as a family."

"On June 22, 1941, we were told that the Hitlerites had attacked the Soviet Union. At that time I did not know who the 'Hitlerites' were, or why they had gone to war with the Soviet Union," Liu remembered.

© Sputnik / Alexander Vilf
China and Russia to Jointly Commemorate WWII, Protect History From Attempts to Rewrite It
"I knew that we too in China were fighting a war against the Japanese. I knew that war was a scary thing. But I did not know anything about the Nazis. The Hitlerites had occupied Ukraine, Belarus, Latvia, and the other Baltic countries. Everyone was worried, because this happened so quickly and unexpectedly, and Moscow was in danger. We were then told that Germans were retreating from Moscow. The Soviet people and Soviet soldiers had proven to the world that the Soviet Union was a great and powerful country, capable of repelling the invaders."

Liu recalled that in the children's home, pupils were strictly forbidden from making aspersions on the basis of ethnicity:

"Together with us in the children's home there were children from Germany. The hatred for the fascists was not turned against them; they were on our side. Only once, a student said about the fascists: 'Damn these German bastards!' The teacher immediately reprimanded him and strictly forbade him from conflating Germans with Nazis. 'It does not happen that a whole nation is criminals,' he noted. And the German students were told by our teachers that 'you are here because your parents are also against the Hitler regime.' This was my first life lesson in internationalism."

© Flickr / Mark Turner
Why China and Russia See Eye-to-Eye on Victory Day
"Now I am 88 years old; I do not have the health and strength I did before," Liu continued. "Still, I accepted the invitation to visit Moscow for the celebration of the 70th anniversary of the Victory gladly and without any hesitation. I am always pleased in visiting Russia. I consider it my second home. During the war, we used to say that the Soviet Union was our country, our homeland. All my peers from Ivanovo said so, not just the Russian students. Soon after the start of the war the phrase 'For the Motherland! For Stalin! For World Peace!' appeared. In the Ivanovo child home for international students it was repeated in different languages –Chinese, Spanish, Greek, Serbian, Bulgarian, German. To us these words were understandable to any pupil without any translation."
...
Reddit
Google+
Blogger
Pinterest
StumbleUpon
Telegram
WhatsApp
185