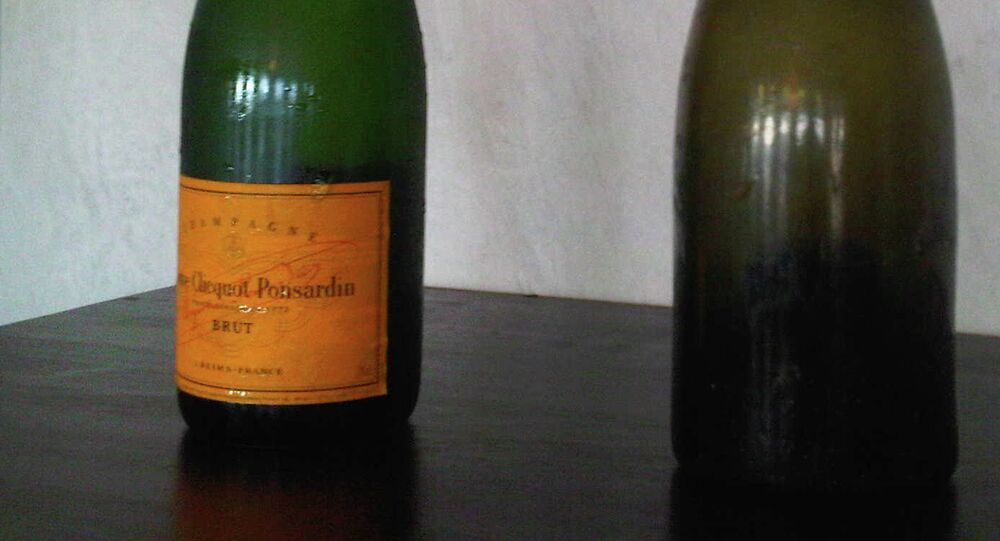 French scientists have said that 170-year old champagne found on a shipwreck tasted rather good despite its high sugar content.

© Sputnik / Ilya Pitalev
Kim Jong Un Orders Rare Snake Wine to Improve Virility: British Tabloid
The Veuve Clicquot champagne discovered on a 170-year-old shipwreck tasted pretty good despite being super-sweet, according to a new study, published by French researchers in the Proceedings of the National Academy of Sciences journal.

The study comes five years after 168 bottles of what is thought to be the world's oldest champagne were found 50 meters (165 feet) below the Baltic Sea.

Some of the bottles were unusually well-preserved thanks to the cold and dark conditions. In 2011 and 2012, several of them were sold at auction for tens of thousands of dollars.

© AP Photo / Lehtikuva/Jussi Nukari
An unidentified woman smells the aroma of one of the 168 bottles of champagne salvaged from a 200-year-old shipwreck in the waters off Aland Islands, between Sweden and Finland, which was opened at a sampling in Mariehamn, Finland on Wednesday Nov. 17, 2010

The study, led by Professor Philippe Jeandet of the University of Reims in Champagne-Ardenne, reported "chemical and sensory analysis" of the rare champagne.

"Possibly the most striking feature of the Baltic champagne samples is their extraordinarily high sugar content," the study said.

According to the research, the liquid contained nearly 140 grams of sugar per liter, about triple the amount typically seen in modern-day samples.

The chemical analysis showed that the winemakers at the time used high levels of concentrated grape juice to sweeten the champagne, rather than cane sugar. The alcohol content was around 9 percent, compared to 13 percent in today's brands.

Additionally, scientists have found "unexpectedly high" levels of iron, copper and table salt in the old samples, much higher than compared to modern champagne.

Wine-tasting experts, for their part, described the vintage champagne as "grilled, spicy, smoky and leathery, together with fruity and floral notes."

Colombian Detained at Moscow Airport With Cocaine in Wine