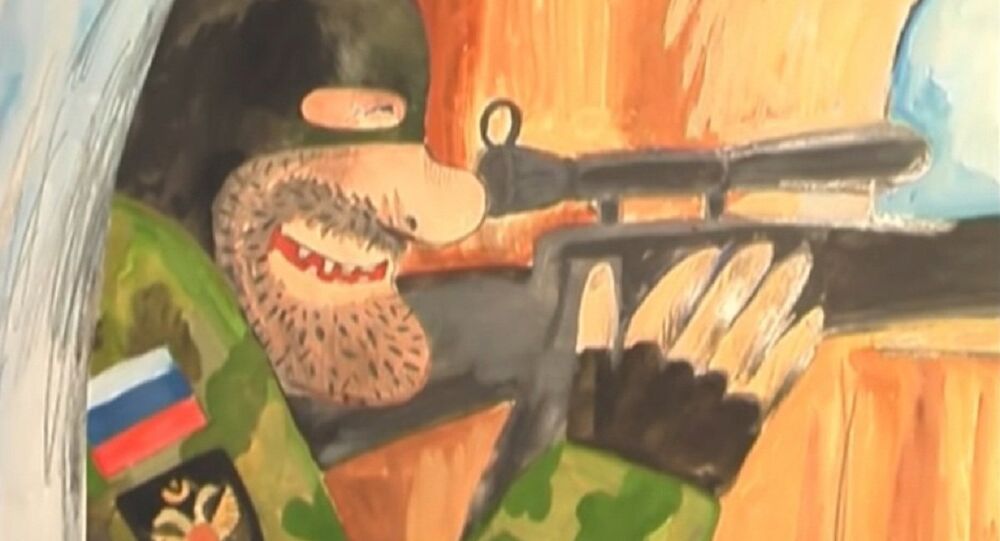 The series of short films, made by Ukrainian schoolchildren, feature scenarios including an unshaven Russian sniper gleefully targeting children, mothers and pets, a Russian crocodile dying after literally biting off more than he can chew in Crimea and eastern Ukraine, and more.

The evil Russian sniper, eagerly targeting children, mothers and dogs. The film features the classic propaganda technique of picturing 'the enemy' as ugly, crude and stupid, and concludes with the unabashedly propagandistic message "People and Army Forces are United!"

Another piece features a 'Russian crocodile' biting off Crimea and Donbass, before flipping on his back, writhing in pain and literally choking to death. The film concludes with the message "Don't grab what is not yours –that could lead to death!"

Another of the cartoons features Ukrainian conscripts in a bus, happily going off to war, referring to Kiev's recent debacle of a conscription campaign, with the messages 'Glory to Heroes!' and 'Come back alive!' superimposed over the people the soldiers are meant to be protecting. Anti-war viewers commenting on the film on social media noted that it's obvious that the women, children, and retirees pictured happily waving to the soldiers are obviously not located in the conflict zone in eastern Ukraine, where the Ukrainian army, along with armed far right nationalist 'self-defense' battalions have been accused of war crimes against the residents of the region.

Typical to propaganda of this kind, Krok's films attribute the country's problems to an unpleasant and easily defined enemy, in this case Russia, and conclude with simple, blunt messages in support of Kiev's policies. The 'ugly enemy', pictured as a crude and emotionless sniper or a reptilian creature, is shown as an uncivilized, barbarous, amoral monster. Doubtlessly crafted with the support of adults, the Krok films' messages are in line with a much wider information and psychological warfare campaign presently underway in Ukraine. Kiev's efforts have included the banning of all Russian films and television series throughout the country, extensive one-sided propaganda on state and oligarch-owned television channels about the so-called 'anti-terrorist operation' being carried out by the Ukrainian armed forces in the east, and a state-supported online cyber warfare campaign aimed at Ukrainian and Russian internet users known as the Ukrainian Information Army.

War of Words: Moscow Not Planning on Creating 'Information Army'