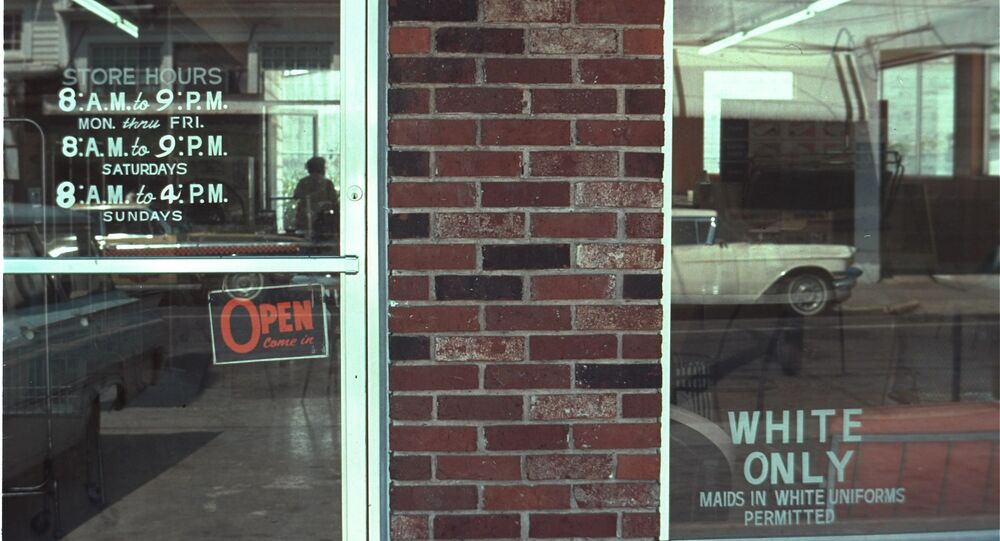 Back to Segregation? 'White People Only' Signs Appear on Austin Businesses

Racially charged stickers have flooded the city of Austin, Texas leaving residents and business owners in awe, with some considering it racist, while others called it a joke.

Having the city’s logo on them, the stickers read: "exclusively for white people," and were put on at least six businesses.

The racist remarks were discovered by passersby, employees and business owners.

Brianna Smith was walking by a store this week when she spotted one.

"This just goes to show racism is very much alive TODAY," she wrote on her Facebook page. "And by this being sponsored by the city of Austin absolutely DISGUST me."

© Flickr / Ed Schipul
Having the city’s logo on them, the stickers read: “exclusively for white people,” and were put on at least six businesses.

At a local bake shop, April Jensen was working and notice something on the front door that read "exclusively for white people," with an offensive message underneath, also having a city logo on it.

"My reaction was basically shock and confusion. I was a little hurt," Jensen said.

Austin Mayor Steve Adler issued a statement, condemning this racist act and denying the city’s sponsorship or giving anyone the authority to use its logo.

"This is an appalling and offensive display of ignorance in the city," the statement read.

The statement also acknowledged that the businesses that were defaced with the stickers "neither made, nor knowingly displayed them."

State lawmakers took to Facebook to expressed displeasure with the event.

"Some jokes are not funny," State Rep. Dawnna Dukes (D-Austin) wrote. "If this is a joke at all, it is tasteless. … I will be damned if this will occur in my House District … in this historical black community or any community."

Many people believe an outsider is behind these racist stickers.

"Doesn’t seem like in a Texan’s nature to want to hurt our small businesses on the east side," Windmill Bicycles shop owner said.

Austin has seen some demographic transformations within the past 15 years. According to Census Bureau data, the African-American population in East Austin has drastically decreased from 1990 to 2000, from 80% to less than 20% in some areas.

Austin Police are currently investigating. Those caught posting the stickers will face graffiti charges, according to police.

Oklahoma University Scandal Reveals Campus Discrimination Is Rife Across US

US DoJ Preparing to Sue Ferguson Police for Discrimination – Reports