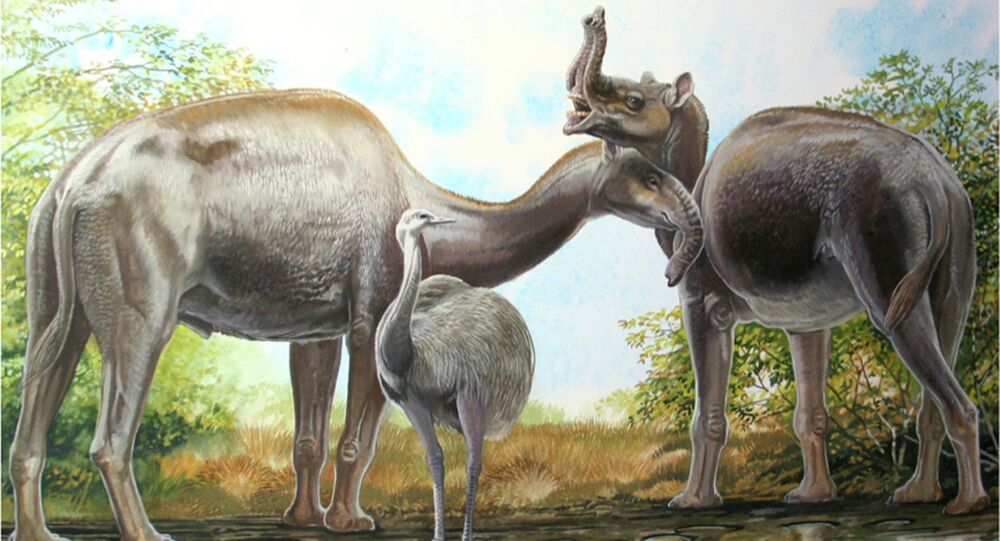 A nearly 200-year-old evolutionary puzzle surrounding the group of mammals that Charles Darwin called the "strangest animals ever discovered”, has now been assembled; the scientists now know what group of animals they relate to.

© AP Photo / Ivan Sekretarev
Mammoth Task: Cloning of Extinct Animals Could Be a Huge Ethical Problem
Scientists have put together the pieces of a nearly 200-year-old evolutionary puzzle surrounding the group of mammals, called by Charles Darwin "strangest animals ever discovered."

About 180 years ago the British naturalist collected the fossils of very strange beasts – one looking like a hybrid of a hippo, rhino and rodent and another resembling a humpless camel with an elephant's trunk.

These weird South American creatures went extinct some 10,000 years ago. Since the collection of their remains scientists tried to find out what group of animals these two related to.

"Fitting South American ungulates to the mammalian family tree has always been a major challenge for palaeontologists, because anatomically they were these weird mosaics, exhibiting features found in a huge variety of quite unrelated species living all over the place," the US ScienceDaily scientific news website quotes Ross MacPhee, one of the paper's authors and a curator in the American Museum of Natural History's Department of Mammalogy as saying.

"This is what puzzled Darwin and his collaborator Richard Owen so much in the early 19th century. With all of these conflicting signals, they couldn't say whether these ungulates were related to giant rodents, or elephants, or camels — or what have you," he added.

"Although the bones of these animals had been studied for over 180 years, no clear picture of their origins had been reached. Our analyses began by investigating ancient DNA to try to resolve the problem," Ian Barnes, Research Leader at the Natural History Museum and one of the paper's authors, explained.

© REUTERS / Peter Schouten
An artist rendering shows the unusual native ungulates of South America Toxodon platensis which were more closely related to perissodactyls (horses and their allies) than to other living placental mammals in this handout illustration released on March 17, 2015

The researchers however have resorted to fossil protein sequences method, which allowed them to peek back in time up to 10 times farther than they could with DNA. Besides, the ancient DNA did not survive in these fossils, because the DNA molecule survives poorly in the warm, wet conditions like those typical of South America.

Thus  the researchers switched to analyzing collagen, a structural protein found in all animal bones that can survive for a million years or more in a wide range of conditions. The chemical structure of the amino acids that make up a protein is ultimately dictated by specific coding sequences in the organism's DNA.

Because of this key relationship, amino acid compositions of the same protein in different species can be analyzed and compared, providing insight into how closely the species are related.

The scientists used proteomic analysis to screen 48 fossils of Toxodon platensis and Macrauchenia patachonica, the very species whose remains Darwin discovered 180 years ago in Uruguay and Argentina.

Modern techniques revealed that the closest living relatives of these species were the perissodactyls, the group that includes horses, rhinos, and tapirs rather than elephants and other species with ancient evolutionary ties to Africa as some taxonomists have maintained.

The findings have been published in the journal Nature on Wednesday.

Documents Reveal Mammoth Hunt for a Suit for Dead Lenin