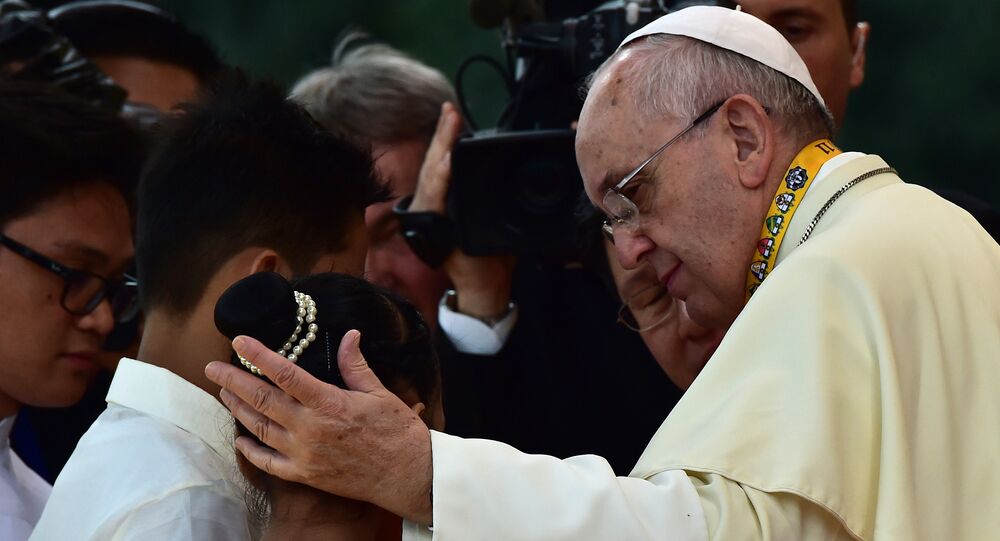 In an interview with Mexican television, the pontiff says he has a feeling that his will be a brief pontificate of not more than five years, and that his one problem is not being able to go the pizzeria for a pizza.

© AFP 2021 / ANSA / MAURIZIO BRAMBATTI
Pope Francis, Merkel Discuss Global Issues, Poverty Ahead of G7 Summit
Pope Francis has given a wide-ranging interview with a Mexican television network, covering topics such as migration, the future of the papacy, and the length of his own tenure as pontiff.

"I have the feeling that my Pontificate will be brief: four or five years; I don't know, even two or three," said the Pope, who is 78. "Maybe it's like the psychology of the gambler who convinces himself he will lose so he won’t be disappointed and if he wins, is happy. I do not know. But I feel that the Lord has placed me here for a short time, and nothing more."

When asked by the journalist from Televisa News if he likes being Pope, Francis replied, "I don't mind!" before explaining that he misses the freedom he had as a cardinal in Buenos Aires. "The only thing I would like is to go out one day, without being recognized, and go to a pizzeria for a pizza."

According to Francis, his predecessor Pope Benedict was courageous in opening "an institutional door" to the concept of the Popes emeritus, or retired Pope. "60 years ago there were no emeritus bishops," said Francis. "And now we have 1,400."

© REUTERS / Sandro Weltin/Council of Europe/Handout via Reuters
Conservative Polish Catholic Writer Slams Pope Francis for Being Soft on Russia
"However, I do not really like the idea of an age limit. Because I believe that the Papacy is a kind of last instance. It is a special grace," said Francis, when asked if he could envisage Popes retiring at 80, as is the case with bishops.

On migration, the Pope, who is the son of Italian immigrants to Argentina, said that "Today, migration is the result of a malaise in the etymological sense of the word, the result of a hunger," explaining that his personal history, and being from Latin America, make him feel more responsible for giving a voice to people who are forced to leave their countries the world over.

"I rejoice that Europe is reviewing its migration policy. Italy has been very generous and I want to say that. The mayor of Lampedusa, who is a woman, has put herself on the line at the cost of transforming the island from a tourist destination to a place of asylum and welcome. Which means earning less money. This is heroic."

The Pope chose to hold the interview with the Mexican broadcaster at the Casa Santa Marta, in the room where the Council of Nine cardinals, his advisers, hold their meetings and which is dominated by an image of the Virgin of Guadalupe. The Pope has lived in a suite at the Casa Santa Marta since his election two years ago, declining to move into his official residence at the grand Apostolic Palace.

Pope Francis to Address US Congress in September

Haircuts for the Poor, Courtesy of Pope Francis