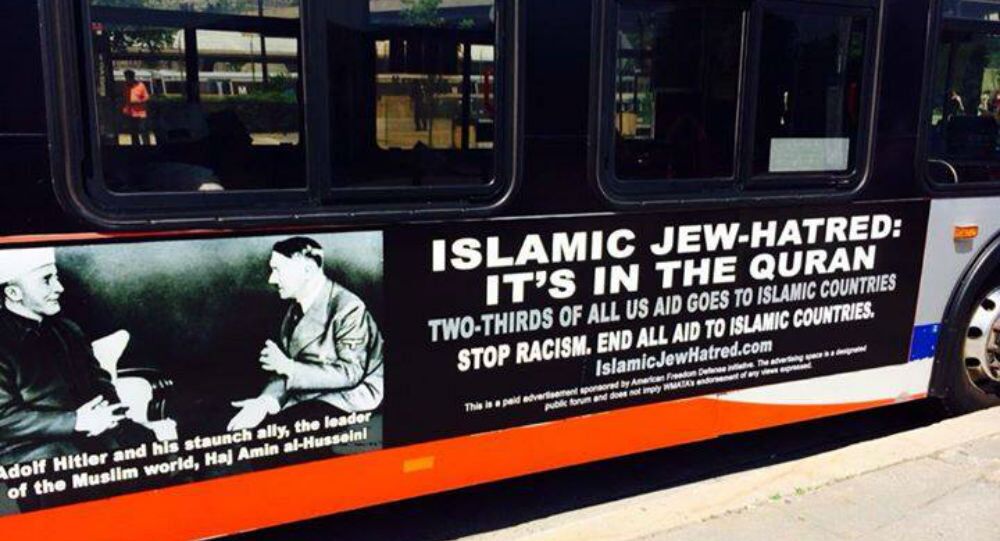 A Federal Judge has ordered Pennsylvania buses and trains to display “Stop the Islamic Jew-Hatred” ads that call for ending US foreign aid to all Islamic countries.

AFDI, an American offshoot of a European anti-Muslim organization, claimed it has a first amendment right to run bus ads linking Muslims to Hitler.

The judge sided with them on the premise that since SEPTA has run other political speech ads in favor of teacher seniority or opposed to fracking, it opened up its advertising spaces as venues of expression.

"He agreed with us on all the issues," said AFDI attorney Robert Muise.

Some ads state: "Two thirds of all US aid goes to Islamic countries."

Others say "Islamic Jew-Hatred: It’s in the Quran," with a picture of Hitler meeting with Muslim nationalist Haj Amin al-Husseini, who was active in pan-Arabism when Palestine was a British territory.

SEPTA rejected the ads, having concerns over portraying Muslims in a negative manner.

The ad "disparaged Muslims because it portrayed them in a way that I believe was untrue and incorrect and false," the Authority’s General Counsel Gino Benedetti said.

"It put every single Muslim in the same category as being a Jew Hater."

© Flickr / Jarrett Stewart
SEPTA rejected the ads, having concerns over portraying Muslims in a negative manner.

But Judge Goldberg said that the content of the ad “squarely involves political expression and reflects plaintiffs' interpretation of a religious text, both of which are protected speech.”

"He found the restriction on our client’s speech to be content based and unconstitutional," said Muise.

The attorney added his clients hope to run the ad.

Spokesperson Jerri Williams says SEPTA is disappointed, but is evaluating whether to appeal.

AFDI, which the Southern Poverty Law Center classified as a hate group, has filed more than a dozen lawsuits against transit authorities across the country over anti-Islamic ads, and was able to post ads in Washington D.C., New York and San Francisco.

Last year, the group attempted to trademark the phrase "Stop Islamisation of America," but the Federal Circuit found it too offensive.

Pope Francis Defends Freedom of Speech, but Urges Not to Make Fun of Faith