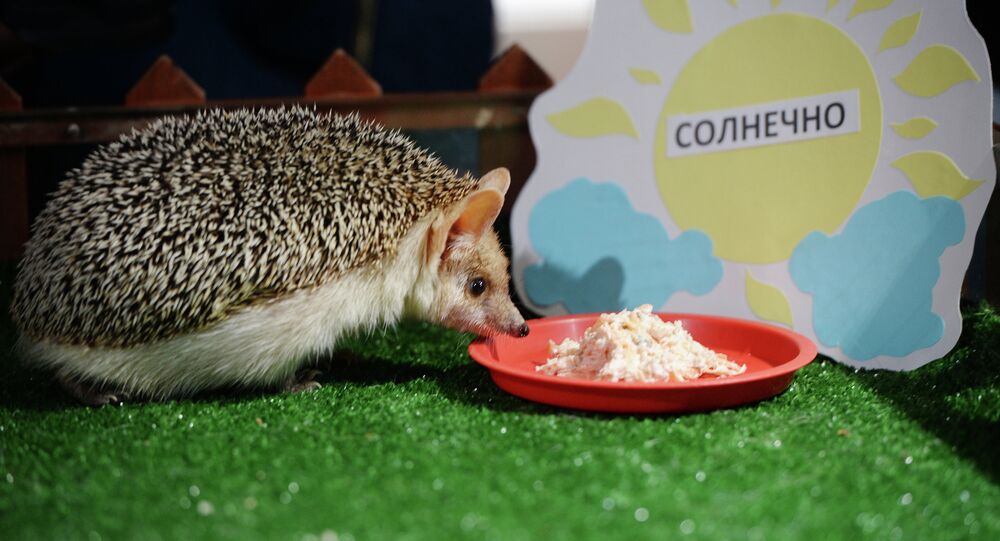 A Russian hedgehog in Yekaterinburg Zoo has promised the people of the Urals an early spring.

MOSCOW, February 2 (Sputnik) — Pugovka, a long-eared Russian hedgehog living in the Yekaterinburg Zoo, promised the people of the Urals an early spring on Monday, in a local event complimenting the American holiday Groundhog Day.

Pugovka, the Russian diminutive for 'button' or 'buttonette', was placed on a mat before two separate sets of plates with her favorite delicacies, including curds, carrots, and ground meat, with the phrases 'early spring,' 'late spring,' 'sunny' and 'cloudy.'

Unable to make up her mind at first, Pugovka eventually chose 'early spring'. Then, thinking a bit between 'sunny' and 'cloudy', she ended up at 'sunny', signaling a prediction of an early and sunny spring.

© Sputnik / Pavel Lisitsyn
Pugovka the hedgehog in Yekaterinburg Zoo, seen here as she predicts the weather for the coming spring.

This is Pugovka's fourth year serving as prognosticator.

A statement issued by the Yekaterinburg Zoo on Monday noted that "this event is similar to the overseas Groundhog Day and the ancient Roman Hedgehog Day, where predictions are made regarding the coming spring. However, the zoo does not have a groundhog, so our long-eared hedgehog Pugovka was chosen the job. This year she continued her responsible role –to determine what kind of weather awaits us when spring begins."

The famous American holiday Groundhog Day, which was popularized around the world by the 1993 film of the same name, was brought to the United States by German immigrants. According to the American tradition, if Punxsutawney Phil leaves his burrow and doesn't see his shadow, his country will face an early spring. This year, Phil emerged from his burrow atop Gobbler's Knob in Pennsylvania and saw his shadow, forecasting six more weeks of winter for North America.

In recent years, some cities in Russia have decided to celebrate the holiday themselves, only using hedgehogs instead of groundhogs. The groundhogs used in the American holiday, the Marmota monax, are found only in North America; in Russia, the hedgehog is a widespread woodland animal of forest and cultural lore. North American groundhogs who have made their way to Russian zoos usually sleep through the February 2 holiday, given the country's longer winters.

Things You Should Never Say Unless You Want to #RuinAWeddingIn5Words