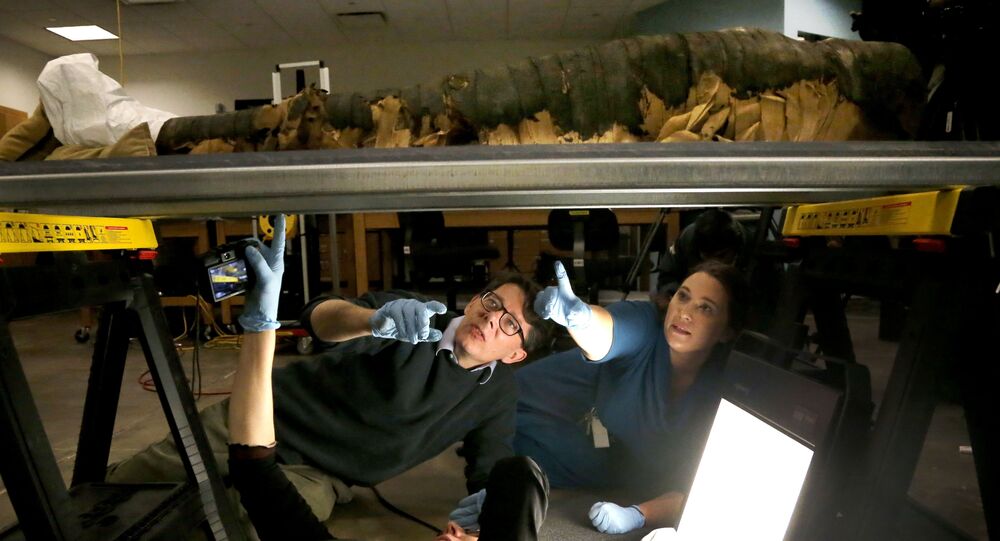 Scientists from Chicago's Field Museum have started conservation work on the 2,500-year-old mummified remains of a 14-year-old Egyptian boy, the Associated Press reported on Thursday.

© Wikipedia / J.M.Garg
Twelve Ancient Statues of Jain Tirthankara Deities Found in Indian Temple
MOSCOW, December 11 (Sputnik) — Conservators opened the coffin last Friday in a bid to perfpr, conservation of the mummy of a boy named Minirdis, the son of an Egyptian priest.

Scientists are seeking to stabilize the coffin and the mummy so that they can be transported to the Mummies: Images of the Afterlife exhibition, due to open at the Natural History Museum in Los Angeles in September 2015.

The mummy will also be on display at the Denver Museum of Nature and Science in the fall of 2016.

At the moment, efforts are being made to repair broken sections of the coffin and to fill holes and gaps in the death mask by using new linen.

© Flickr / Let Ideas Compete
Ancient Rings Stolen From Swedish Museum Returned by Post: Reports
“There's always a risk of damage, so we like to handle these things as little as possible. The fascinating thing about any mummy is that it's survived as long as it has. They're actually amazingly fragile,” scientist J.P. Brown said, according to the Associated Press.

He was echoed by Molly Gleeson, project conservator at Penn Museum's In the Artifact Lab: Conserving Egyptian Mummies exhibition in Philadelphia.

“These are unique individuals, unique objects. There's nothing else like them. If damage were to happen, we can’t put things back together exactly the way they were before”, Gleeson told the Associated Press.

The mummy of the Egyptian boy has been in the possession of Chicago’s Field Museum since the 1920s, when the museum got it from the Chicago Historical Society. In addition, the museum collection includes 30 more Egyptian mummies.

Ancient Mesopotamia at Risk of Destruction by IS Thugs