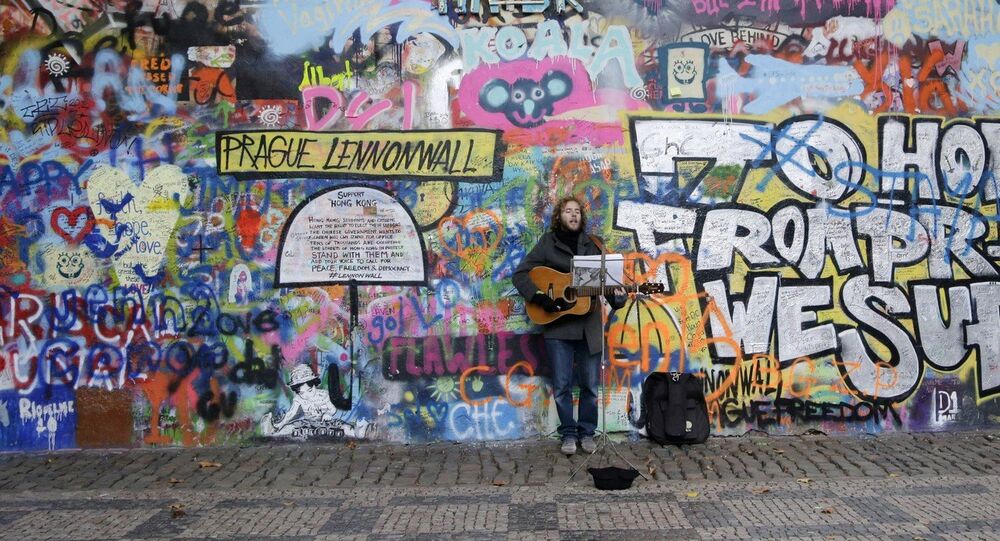 Renown Lennon Wall in Prague Back After Being Whitewashed

The Lennon Wall in Prague, whitewashed less than a week ago, is once again covered with graffiti, expressing eternal values of peace, love, freedom and understanding.

MOSCOW, November 23 (Sputnik) — The world-renowned Lennon Wall in Prague, painted white except for the words ‘Wall Is Over’ on 17 November by a local art group, has shown signs of recovery as portraits of the late ex-Beatle along with a walrus and a yellow submarine have appeared today along with several other spray-painted graffiti on the structure that symbolized the anti-Communist resistance of the 1980s.

The Lennon Wall, a well-known tourist attraction in the Czech capital, was painted all white several days ago by a Prague-based art group, which claimed it was an expression of their artistic viewpoint rather than an act of vandalism. Despite the artists’ claim that their intention was to whitewash the wall for the new generation to express their ideas, many doubted if the Lennon Wall would recover the way it had during Communist rule, when authorities had painted it over several times only to find the wall’s pictures and writings appear over and over again. Those who wrote political slogans on the wall were called ‘Lennonists’ during the 1980s.

History does repeat itself, as today the Lennon Wall is almost completely covered with diverse inscriptions, paintings and other graffiti, according to the Prague Post. People come to the wall to leave their message, some using spray cans of paint, ladders, buckets, brushes and rollers. Some of them are accomplished artists, whilst some are amateurs or just tourists passing by, who are also eager to leave their mark on the novelized Lennon Wall. Street musicians have been spotted near the wall this past weekend. All in all, people have come to showcase the power of self-expression and artistic freedom.

The ‘Wall Is Over’ slogan was modified and now reads ‘The War Is Over’ after John Lennon’s 1969 anti-Vietnam war campaign ‘War is over – if you want it’, the concept of which was later used for a Christmas holiday song in 1971.

“If the communists could not stop the wall then I doubt a bunch of pretentious students have much of a chance,” a comment on the Prague Post’s Facebook page reads. Another critic dubbed the artists who painted the wall all white “a bunch of idiots.”

The Lennon Wall is now different, but the same topics still prevail the way they did at the final accords of the Cold War. Flower-power peace symbols and two-finger Churchill-style ‘victory signs’ are all over, along with multiple portraits of John Lennon. Among the writings on the wall, the most prominent are ‘Freedom’, ‘Goodness’, ‘Love’, as well as multiple quotations from songs both from the Beatles era and John Lennon’s later solo work. Among the highlights is a ‘JL’ monogram with numbers over the letters, ‘9.10.1940 – 8.12.1980’.

Thousands of New Yorkers sing together to commemorate John Lennon