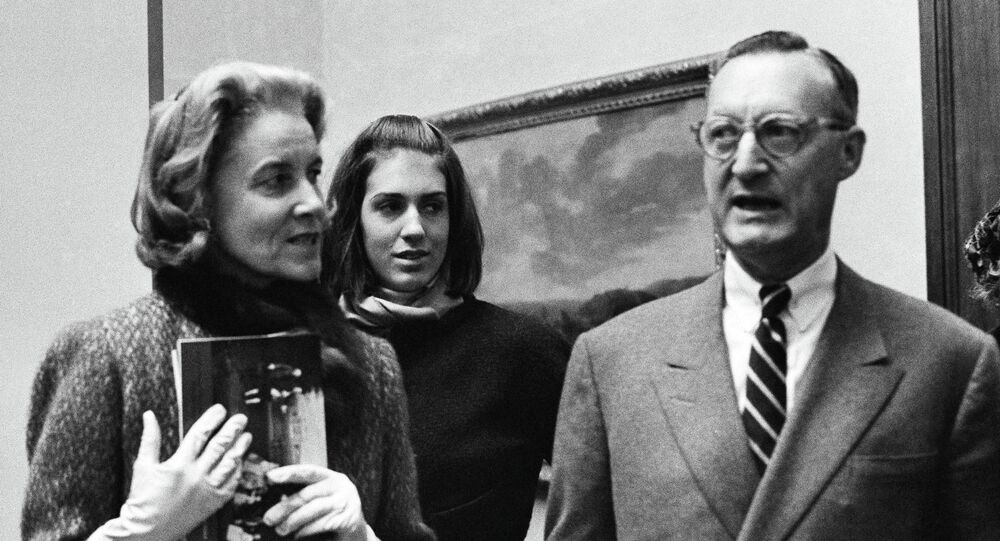 More than 5,000 items from Rachel Lambert Mellon's estate have been auctioned off this month at Sotheby's, the world’s fourth oldest auction house. Mrs. Mellon, horticulturalist, gardener, fine arts collector and philanthropist, had impeccable taste, and according to gossip, was even envied by then White House First Lady Jacqueline Kennedy.

MOSCOW, November 22 (Sputnik), Ekaterina Blinova — More than 5,000 items from Rachel Lambert Mellon's estate have been auctioned off at Sotheby’s, one of the world's largest brokers of fine and decorative art, jewelry and real estate.

"If there was one word to describe the collection of shabby chairs, chipped console tables, battered settees and assorted porcelain replicas of vegetables once owned by the late heiress, and apparent magpie, Rachel Lambert Mellon, known as Bunny, and auctioned off at Sotheby’s on Friday afternoon, it was "patina," the New York Times reported.

Rachel Lambert Mellon, a wealthy fine arts collector and philanthropist, died at the age of 103 in March 2014. Mrs. Mellon, dubbed "Bunny," was the daughter of Gerard Barnes Lambert, president of the Gillette Safety Razor Company. Marriages made to men with banking, oil and steel empires provided Rachel Lambert Mellon with luxurious houses in New York and Washington, apartments in Paris and estate in Virginia, Cape Cod, Antigua and Nantucket.

"Rachel "Bunny" Mellon was known for many things," Vanity Fair narrates, "a fortune so vast that it bought seven homes (and a private airport), a sense of privacy so fierce that it bordered on reclusive, and a thumb so green it redesigned the White House Rose Garden."

Mrs. Mellon "had an impeccable eye for everything," the Telegraph emphasizes. Unsurprisingly though, Hubert de Givenchy, "a man not known for merciful judgments when it came to matters of style" was one of her closest friends. It was rumored that Rachel Mellon's taste was even envied by Jacqueline Kennedy, who once complained to Mrs. Mellon: "I love your house, but hate mine. Can you help me?" the media outlet points out.

In her 90s, Mrs. Mellon was involved in a political scandal because of her support for North Carolina Senator John Edwards. Sponsoring John Edward's presidential campaign the rich heiress was unaware that "the then-senator was using her donations to hide a mistress," the New York Times notes.

Trying to describe the collection of Mrs. Mellon, Vanity Fair admitted that "Mellon's estate is so grandiose and so spectacular that selecting only one thing is downright impossible." To name but a few: a 9.75-carat vivid blue diamond, an exquisite gold Cartier necklace with 29 European-cut diamonds, a rare Tiffany-branded Rolexes, a collection of vintage gold snuffboxes, a fanciful antique Chinese 98-piece dining set – were presented at auction at Sotheby's this month.

Although "America may not have royalty," Vanity Fair notes, Mellon's estate would be fit for a real queen.