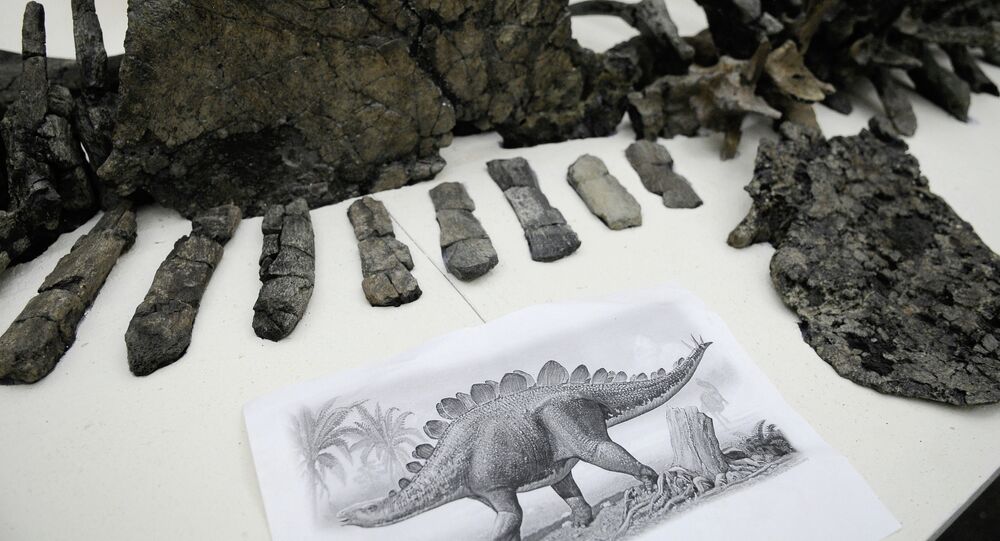 An almost complete Stegosaurus will welcome visitors to London’s Natural History Museum from December 5, a display of some of the most scientifically valuable dinosaur bones ever found.

MOSCOW, November 15 (Sputnik) — The world’s most complete stegosaurus skeleton is to go on display next month in London’s National History Museum, the first complete dinosaur to be shown there in almost 100 years.

“Stegosaurus fossil finds are rare. Having the world’s most complete example here for research means we can begin to uncover the secrets behind the evolution and behavior of this intriguing dinosaur species,” said Professor Paul Barrett, the Museum’s lead dinosaur researcher, in a press release.
Barrett told the Telegraph that he discovered the skeleton for sale when he was looking through an auction program for sharks teeth and ammonites, and started raising the money to buy the specimen. “We are extremely grateful to the 70 generous donors, with particular thanks to Jeremy Herrmann, who made this iconic acquisition possible,” said the museum’s director, Sir Michael Dixon.

The dinosaur was discovered in spring 2003 at the Red Canyon Ranch in Wyoming, USA. Bob Simon, who runs a dinosaur quarry at the ranch, found the skeleton buried at the top of a hill during the quarry’s expansion. The stegosaurus skeleton was discovered to be almost fully connected after three weeks of excavation brought its full extent to light.

The Stegosaurus was a large plant-eating dinosaur that lived during the late Jurassic Period, more than 80 million years before the most well-known dinosaur, Tyrannosaurus Rex. Fully grown stegosauruses are known to be up nine meters in length, while the specimen on show at the museum is a young adult of just over five and-a-half meters. The skeleton is made up of more than 300 bones, studied and pieced back together by the museum’s team since its arrival in December 2013.

As the dinosaur was found on private land, it was allowed to leave the US and be bought by the London museum. Unlike many other countries which place the collection of fossils under strict control, in the US their collection is only restricted on public land. The fossil auction business is a lucrative one, in which museums face competition from wealthy private collectors for fossils.

Hans-Dieter Sues, curator of vertebrate paleontology at the Smithsonian National Museum of Natural History in Washington, described the specimens and prices on offer as “just stunning”, the New York Times wrote last year. “You see entire dinosaur skeletons out of China, and dinosaur eggs. These things are for sale.”

In July last year, the Times reported that a rare fossil find of two dinosaurs locked together in a fighting pose was set to be auctioned in New York with a guide price of $7 mln to $9 mln. The sellers of the fossils, ranch owners and prospectors, had decided on auctioning them to the highest bidder. “This lines their pockets but hurts science,” Thomas Carr, the senior scientific adviser at the Dinosaur Discovery Museum, told the paper.
However, this Stegosaurus is to be the subject of scientific investigation at the museum, and will be displayed for visitors to contemplate live on Earth 150 million years ago. “We hope that this amazing specimen will inspire a new generation of young visitors to learn more about the natural world and our place within it,” Dixon told the Telegraph.