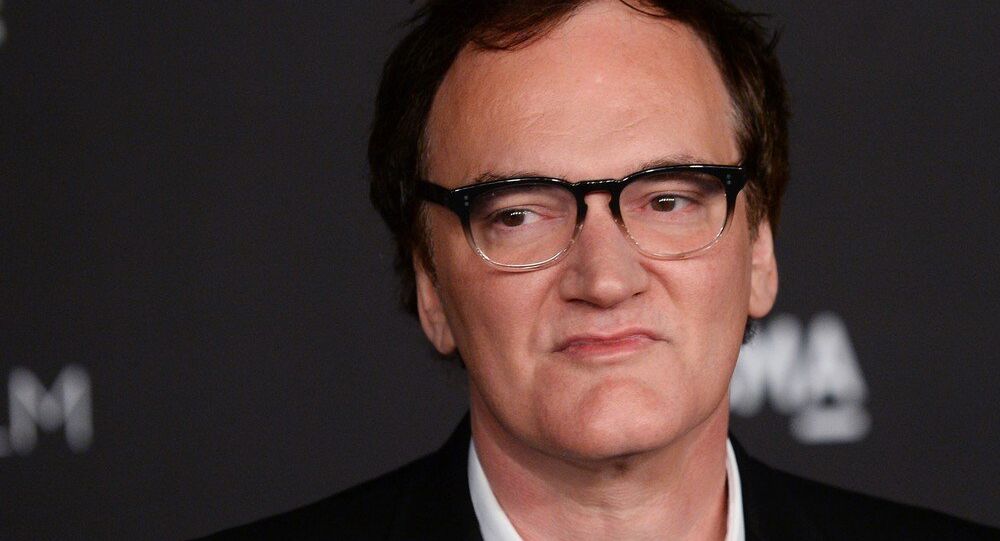 Noted American filmmaker Quentin Tarantino spoke about the upcoming presentation of his eighth work, a 70-mm western "The Hateful Eight" and revealed his plans to retire after releasing his tenth film.

MOSCOW, November 11 (RIA Novosti), Ekaterina Blinova – Quentin Tarantino has announced that he would retire after his tenth film and revealed his plans to present his new western 'The Hateful Eight' as "an epic 70 mm effort."

"I don't believe you should stay on stage until people are begging you to get off. I like the idea of leaving them wanting a bit more. I do think directing is a young man's game and I like the idea of an umbilical cord connection from my first to my last movie. I'm not trying to ridicule anyone who thinks differently, but I want to go out while I'm still hard… I like that I will leave a ten-film filmography, and so I've got two more to go after this," the famous film director said as cited by Deadline Hollywood, adding, however, that "it's not etched in stone."

Tarantino, a former video shop clerk, made the first of his "ten" films, 'Reservoir Dogs', in 1992, while his last movie – the slavery drama 'Django Unchained' – was released in December 2012 winning two Academy Awards in 2013.

Remarkably, it is not the first time Tarantino has discussed his retirement plans. In 2013 the director told the Independent that he was considering quitting, adding that 'Django Unchained' could become one of his final films: "OK, it would sound really cool because it's a round number and it would make sense as I would have made three movies per decade, but it’s not fixed in time. I still have some more things to do before being done with movies."

However, the unpredictable 51-year old Oscar-winning director may change his mind, cinema critics say. It seems that Tarantino is currently totally immersed in his new western which he plans to establish as "an epic 70 mm effort."

"If we do our jobs right by making this film a 70 mm event, we will remind people why this is something you can’t see on television and how this is an experience you can't have when you watch movies in your apartment, your man cave or your iPhone or iPad," he told Deadline.

"You'll see 24 frames per second play out, all these wonderfully painted pictures create the illusion of movement. I'm hoping it's going to stop the momentum of the digital stuff, and that people will hopefully go, 'Man, that is going to the movies, and that is worth saving, and we need to see more of that," the iconic film director stressed.

Tarantino blasts the current trend of digital filmmaking. While the classic 70 mm films "have become endangered" and "the theatrical experience is become more and more a throwaway," the best way to preserve the beauty and the special atmosphere of the movie is to return back to "the '60s style, when there were big roadshow productions of big films like 'The Sand Pebbles,' 'Mutiny On The Bounty', 'Battle Of The Bulge', or 'It's A Mad Mad Mad Mad World'," the famous director believes.

Should Movies Touch Your Heart or Your Eye?