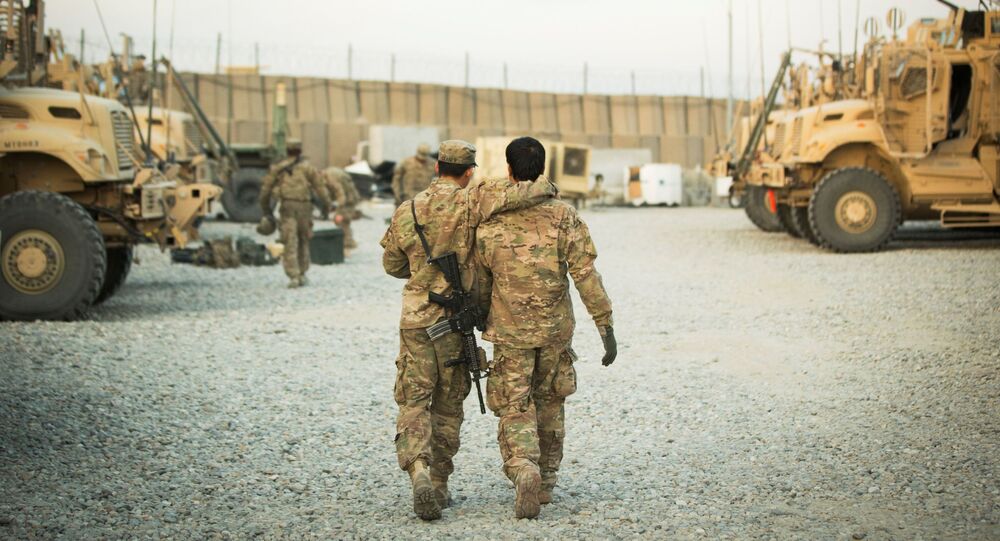 WASHINGTON (Sputnik), Ekaterina Chukaeva - Despite reports that the withdrawal of foreign troops could lead to the increase in violence, the US and its allies are unlikely to prolong their mission, as Afghanistan is no longer a priority for the West and any extension would not be politically palatable in Washington, analysts told Sputnik.

This Friday, US President Joe Biden is receiving Afghan counterpart Ashraf Ghani and National Reconciliation High Council Chairman Abdullah Abdullah at the White House in their first face-to-face meeting. The leaders are expected to discuss issues such as the withdrawal of American forces from the country as well as the evacuation of Afghan interpreters who used to help the US military to a third country while their special immigrant visas are processed.

The talks are taking place just as US troops are leaving Afghanistan after over two decades of military operations there. The US has already withdrawn more than half of its troops from Afghanistan and expects to complete the pullout by September 11.

However, the withdrawal is taking place amid uncertainty and increased violence in Afghanistan. On Wednesday, reports emerged claiming the US intelligence community estimates that the government of Afghanistan could collapse six months after the complete withdrawal of US forces. The US intelligence reportedly revised their initial, more optimistic estimates after the Taliban opposition movement seized dozens of localities in northern Afghanistan.

As the reports about Afghanistan's potential grim future emerge, concerns have risen about the possibility of the US troops remaining on Afghan soil. However, Raghav Sharma, an associate professor and director of the Centre for Afghanistan Studies at O. P. Jindal Global University, does not believe that the US and its allies would prolong their military mission in Afghanistan.

"…This is an option that is not politically palatable in Washington and most other Western capitals. There are new National security threats and priorities for Washington such as China for instance. The reality is Afghanistan is no longer a priority for the West," the expert told Sputnik.

Sharma recalled that the US intervention in Afghanistan enjoyed a relatively high degree of legitimacy both internally and externally and Afghanistan made progress in terms of education, healthcare, free media, civil society, and other fields.

"However all these gains remain fragile and reversible. The Doha agreement indicates that Washington has suffered a "strategic defeat" of sorts in Afghanistan," he said.

According to Sharma, the political future of Afghanistan is marked with deep uncertainty, which could spell trouble for the wider region.

"We are likely to witness a prolonged escalation of violence in the country with the number of IDPs [Internally displaced people] and refugees growing. This would have delimitating consequences for the region in the long run," he concluded.

Not Looking for Peace After All

Washington did not fail in its goals in Afghanistan, because it was pursuing its own interests rather than peace for Afghanistan, Nazif Mohib Shahrani, Professor of Anthropology, Central Asian and Middle Eastern Studies at the School of Global and International Studies of Indiana University, told Sputnik.

"Since the US was there to protect its own interest—revenge for the 9-11 2001 events, destruction and disruption of Al Qaeda [terrorist group, banned in Russia], etc., NOT bring peace or good governance in Afghanistan, they do not see it as a failure," he said.

© AP Photo / Carolyn Kaster
President Donald Trump speaks at Fort Myer in Arlington Va., Monday, Aug. 21, 2017, during a Presidential Address to the Nation about a strategy he believes will best position the U.S. to eventually declare victory in Afghanistan.

The US "did just fine for themselves," the expert said, citing the war experience acquired by American soldiers and an opportunity for the US to test many weapons, including the so-called Mother of All Bombs. The US deployed GBU-43/B Massive Ordnance Air Blast, which is the largest non-nuclear bomb ever used by Washington in a conflict, in Afghan Nangarhar Province, in April 2017 for the first time.

"Their military-industrial complex got the jobs, etc. Where is the Failure? Afghanistan got destroyed and failed," Shahrani concluded.

The US war in Afghanistan, America's longest war of the 21st century spans four presidential administrations, as it started with Operation Enduring Freedom in October 2001, when George W. Bush was president. Bush's successor Barack Obama continued the operation, with the number of US troops in the tumultuous country spiraling to 100,000 in 2010.

After the 2011 elimination of Osama bin Laden, the founder of al-Qaeda, Obama said the number of US troops of Afghanistan would begin to grow smaller, but that failed to gather momentum. Obama’s successor, Donald Trump, ordered the withdrawal of thousands of troops from Afghanistan, and even tweeted that he wanted all troops to be withdrawn by Christmas 2020 – but this, too, failed to materialize. Before Biden's announcement this April, the official number of US troops in Afghanistan reached 2,500, though reports claimed that the actual figure was at least 1,000 more.

Sharma believes that the current situation in Afghanistan is impacted by several complex factors.

"To begin with, the Bonn agreement of 2001 was not quite a "peace agreement" as it totally excluded members of the Taliban who at that point were amenable to co-optation. This would eventually foster spoilers in the Afghan theatre in the long run and today the Taliban is bargaining from a position of strength," he said.

The Bonn agreement, which aimed to re-create the state of Afghanistan following the US invasion, has been repeatedly criticized for ostracizing the Taliban and leading to new tensions.

Fragmented Afghan political elite, the governance vacuum in Afghanistan and weak reactions of the international community have all contributed to the Afghan crisis, Sharma said.

© REUTERS / STRINGER
A woman with a girl walks past the site of a car bomb blast that targeted schoolgirls in Kabul, Afghanistan May 10, 2021.

The terms of the most recent peace deal between the US and the Taliban also "substantially undermined the Islamic Republic of Afghanistan," he concluded. The deal, signed in Qatar's Doha on February 29, 2020, stipulated a gradual withdrawal of US troops as well as the beginning of intra-Afghan negotiations and prisoner exchanges.

However, the level of violence remained high in Afghanistan, with the Taliban repeatedly accusing Washington of violations of the agreement. The Taliban has repeatedly stressed that if Washington fails to fulfill its commitments, the international community should hold the US accountable for all the consequences. At the same time, the Afghan government has been highly critical of the Taliban. Afghan Ambassador to Russia Said Tayeb Jawad told Sputnik recently that the Taliban were being untruthful at Doha talks.