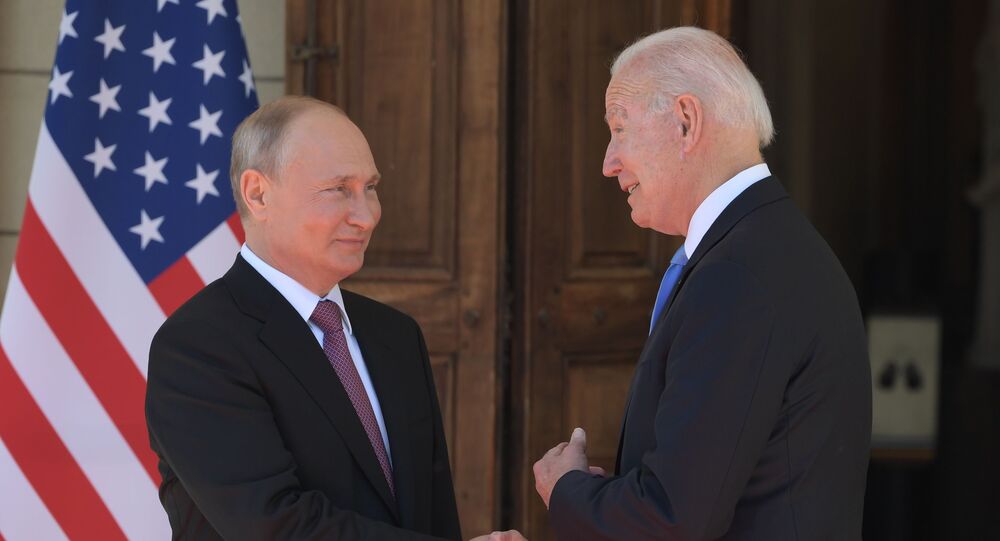 'The Way Putin and Biden Spoke About Each Other is Encouraging Sign for Future', Diplomat Says

The day after the historic summit between Vladimir Putin and Joe Biden in Geneva, it’s still making headlines worldwide, with analysts offering their perspective on the future of Russia-US relations.

Sir Tony Brenton, a distinguished British diplomat and former UK Ambassador to Russia, has shared his impressions of the summit and reflected on possible changes in relations between the two states that we may expect.

Sputnik: In your view, how productive was the summit, and what are the major outcomes of the Putin-Biden meeting in Geneva?

Tony Brenton: I think it was rather a good summit, actually. I mean, both sides played down expectations beforehand, and it was very clear afterwards that major disagreements between Russia and the United States and probably the West still exist, notably over human rights. But nevertheless, on the important items, they carried things forward rather well. I mean, they're sending their ambassadors back. In a time of bad relations, it's actually quite important to have ambassadors in each other's capitals, as I know, having been in Moscow at a time of bad relations. They agreed to pursue discussions on strategic arms limitations, which is a subject which only they can sort out, out of all the countries in the world, and it's very good that they're doing that. And much more interestingly, in a way, they're going to also try to carry forward discussions on cyber aggression of one sort or another. I've been arguing now for some years, as indeed has Russia, that that's a key area of international instability where it would be very useful for the United States and Russia to reach some agreements. And then they agreed on things like Afghanistan, they agreed on things like Iran. So altogether, I think it was as good as could have been expected.

Sputnik: How do you assess the change of tone in the rhetoric of the US president following the meeting with his Russian counterpart?

Tony Brenton: Well, you're right. I mean, he backed away from his accusation that Mr Putin is a killer. He described Mr Putin as a worthy adversary. I think he went out of his way to show Mr Putin the respect which I think Mr Putin seeks. I think the reason he did that is because he attaches high value to doing important business with Russia when he can. I think it was very encouraging as well, the change of tone on both sides in how they spoke about each other, which is an encouraging sign for the future.

Sputnik: What message does the US send to its allies, and how do you expect the US' allies to react to the results of the Geneva summit?

Tony Brenton: Well, you saw that a bit in Mr Biden's press conference after the summit. Both press conferences, I thought, were very interesting. In both cases, you find a president who was trying to talk quietly, warmly about the other president, dealing with the press, which wanted them to be much more hostile. So in his press conference afterwards, Mr. Biden emphasised the importance of the work they've done, but said very clearly that the United States was still standing up very firmly on issues like cyber aggression, hacking, and Mr. Navalny, of course, he mentioned, and the protection of human rights. So there's a rather clear distinction in the message that he put over between a very firm line on the things that the United States and the West more generally think that Russia is getting wrong and the areas where there is valuable cooperation to be done.

Sputnik: Do you expect it to somehow impact the US allies’ attitude towards Russia?

Tony Brenton: Yes, I think it's about to. Just talking here about the UK. The attitude has been pretty deeply hostile to Russia, partly because the Skripal attack happened here, partly because the Litvinenko attack happened here, partly because we have a government which is rather ill-disposed towards Russia at the moment. But I don't think we can afford, if the United States moves into a situation of closer cooperation with Russia, then I think the British government will not want to be left completely behind. So I think finally, it should help to improve our relations with Russia as well.


Sputnik: How might the Geneva summit affect political infighting in the US and Biden’s standing at home?

Sputnik: Well, Biden has to be very careful, of course. One of his clear objectives, as he went into this summit, was not to look like President Trump, not to fall into the sort of love-in which President Trump seemed keen to have with Mr Putin. So he's very cautious about it in the lead up to the summit, very downbeat about the likely product of it. He insisted that there be two separate press conferences rather than a press conference where they stood together in front of the press. By making that distinction, he was able to demonstrate to the US political system that he's still standing very firmly for things that the US believes in, like freedom and democracy. And by clearing that political space for himself, by making it clear that he remains firmly supportive of the things which are very central to the US image of itself, he was, as I say, able to do useful business in areas where there was useful business to be done.