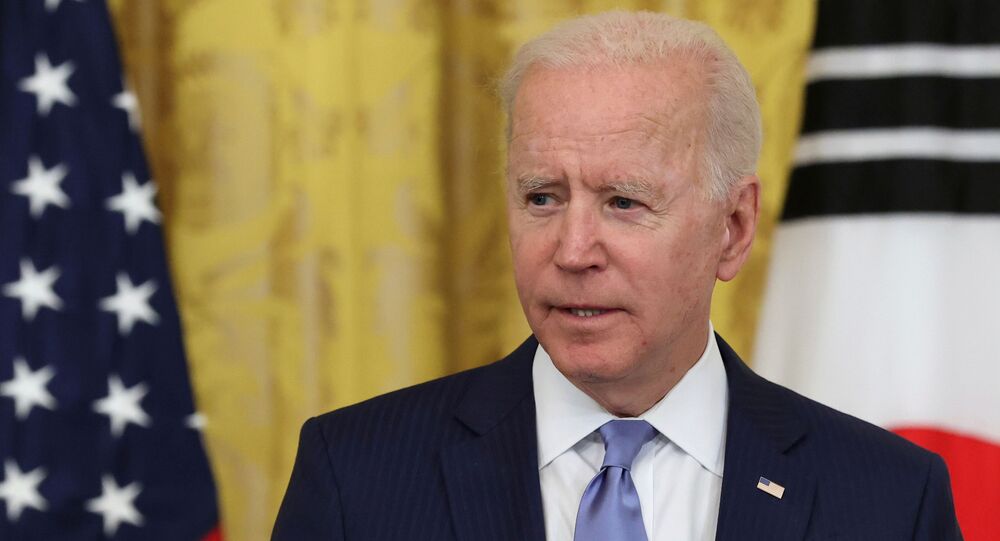 Despite Joe Biden and the Democrats' rhetoric that "a strong middle class is the backbone of America", the president is undermining those he promised to prop up, says Felipe J. Cuello, a Dominican-American Professor of Public Policy at the Pontifical Catholic University.

Joe Biden inherited a growing economy from his predecessor Donald Trump: the US economy saw a historic 33.4% surge in the third quarter of 2020 rebounding – on almost zero inflation – after the COVID-related recession. However, the incumbent president's policies are endangering the robust Trump recovery, conservative observers say, citing a weak April jobs report and soaring inflation.

Sputnik: Your friend and co-author, former diplomat Dr Ted Malloch suggests in one of his op-eds that Biden's infrastructure plan was actually designed to put the oil and gas industry out of work. What's your take on this and what role does "climate change" play here?

Prof. Cuello: Rebranding energy policy as climate change is one of the great propaganda victories of the left in recent years. The point of the fracking ban – arguably Biden's worst policy – is to increase oil prices in international markets, which has serious implications for public finances all over the world. It removes the central plank of the America First Energy Dominance policy of the Trump administration, which was to be a self-sufficient net exporter of hydrocarbons and energy in general. The result is more power for OPEC+, which is a strange policy for a White House with serious objections to Riyadh and Moscow.

For countries that don't produce hydrocarbons, like the Intermarium European countries that make up the the membership of the Three Seas Initiative (TSI) (or the Dominican Republic) the result is structurally higher energy and transportation costs for the citizenry and the public purse. This is what ends up bleeding into inflation indicators for American consumers, who have to pay for their own gas tanks as well as those of the public officials raising these prices.

So there's some policy incompatibility. The Biden party line is a foreign policy for the middle class, but there was a middle class that was counting on working a fracking rig that sent gas to a maritime terminal on the Adriatic Sea, or the Baltic Sea. It only destroys the most American part of the worldwide petrochemical industry, not that of globalist American companies that operate overseas, to say nothing of companies like Gazprom or Saudi Aramco. That's what I mean when I say banning fracking was the worst policy – that gas is cleaner than the fuels it replaces, and cleaner than pretty much every alternative outside of that, too.

Biden's plan is to take a productive sector that is naturally cleaning up the world's energy grid and try and force it towards battery-backed spot generation, which is a very cool idea but not necessarily as environmentally friendly as they might hope – battery metals, from cadmium through the rare earths like Cobalt and Lithium are horribly polluting to mine out of the ground.

Then at the same time you see Biden lifting sanctions on Nord Stream 2, which means more Russian gas will flow into the EU. How is denying American workers the European market a progressive energy policy? How is making sure the EU's gas bill ends up in Russia's pocket a better foreign policy than making sure Middle America gets a slice of that pie?

Sputnik: Would you agree that the Democratic Party's "Bidenomics" in many respects resemble neo-liberal economic experiments in Latin America? How could Bidenomics backfire on the global economy and the international community?

Prof. Cuello: No, on the contrary. The neoliberals would have tried to balance the budget and raise taxes – "belt tightening" – when the time is ripe for stimulus in hopes of dampening the depth of the pandemic recession. The Trump administration primed the pump and kept consumer confidence up but the substantive part of that spending does still have to find a productive use.

Capital can be used productively by the public sector, but the Biden spending bills have so far made sure to direct the full force of the federal government towards their own political and social goals – think of farm subsidies that only go to black farmers, for example. These completely culture war issues applied to the Department of Agriculture's policy areas can be very destructive institutionally.

The neoliberals were never so ideological about their spending priorities, which always seemed to revolve mainly on cutting the sort of programmes that Bidenomics is bringing into being. If they keep wasting capital on wild goose chases like those social engineering projects –and Democrats always insist bringing them into government – then the country will have to grow faster to keep its debt sustainability levels where one would hope they would stay (growing slower than inflation, for example). It must be said, however, that even the temples of neoliberalism, like the IMF and World Bank are now singing a different tune.

This pandemic recession has been weathered better by some countries rather than others. Russia for example is reopening tourist flights to much of Latin America. It would be much more productive to spend US federal dollars on scaling up the COVAX effort with the production of more of your eponymous Sputnik vaccine – especially now that it is a single dose – under patent somewhere else so that American tourists can also keep travelling the world and supporting national airlines and other economy-stimulating consumption.

As a substantive anti-pandemic, anti-recession policy that would be a more effective thing to do, rather than spending all that money on finding the few hundred black farmers and giving them specifically a special subsidy for very little economic policy reason or gain.

Sputnik: What do you think of the theory put out by Fox News host Tucker Carlson that the Democrats are "importing" a more obedient electorate from third-world countries? Does it really pose a challenge to American citizens in your opinion?

Prof. Cuello: Insofar as election integrity has become a serious issue at local, state, and federal level politics, I think the reality is that all the immigration laws on the books have been written by Democrats and they have still broken them even during their own governments. Some conversation has to be had on what the rules are going to be in the future – the wall did work and illegal entry was reduced to near-zero levels with the requisite amount of policy coordination with Mexico City and Central American countries.

In the meantime, there's too many stories about sanctuary cities handing out IDs that can be used to obtain ballot access and other services like subsidised tuition and even federal programmes. You'll probably hear a lot more about that as the ongoing cleanup effort moves along the various categories of election abuse committed in November come to light. Once you get over the myths like it being impossible to control the flow, border policy is not a very hard issue to solve.

I will say, however, that at some point, some Americans will have to go to jail for acting as the receiving end of criminal human trafficking rings, whether their aims were political or not. Coyotes and cartels are not two different businesses, the money goes to the same people. When you think of, for example, the sanctions on Russian politicians, where if they gave you one dollar suddenly all your financials are frozen for transacting with someone under sanctions. There's some big-name NGOs and trade unions that support the DNC no matter what candidate or policy they put forward. I think that if you took a hard look at their finances, they would struggle to justify where all the money comes from and have a lot of explaining to do.

Sputnik: What future does the Democratic Party's hierarchy want for the United States? Is it what French author Jacques Attali described in "A Brief History of the Future?"

Prof. Cuello: The more radical Democrats are very honest, although I don't know how influential Dr Attali is in the DNC these days. The Democratic party hierarchy did manage to impose Biden and Kamala as candidates during the primaries. And they also managed to impose them as victors, by the correct application of political pressure at the requisite amount of choke points. People who were part of the steal, like Pete Buttigieg who could have complained after they cheated him out of Iowa, were amply rewarded in the Cabinet and the internal power structure. The Democrats are the most powerful political party in the world right now, though I do think Biden is a weak receptacle for the Politburo behind him which will limit what they can achieve before the Republicans re-take the legislature next year. What I certainly do hope is that they want what is best for America, and they resist the worst impulses of their most radical wing.

As Lyndon Johnson found out the hard way, a Democrat's worst enemy is the Democrat to their left.