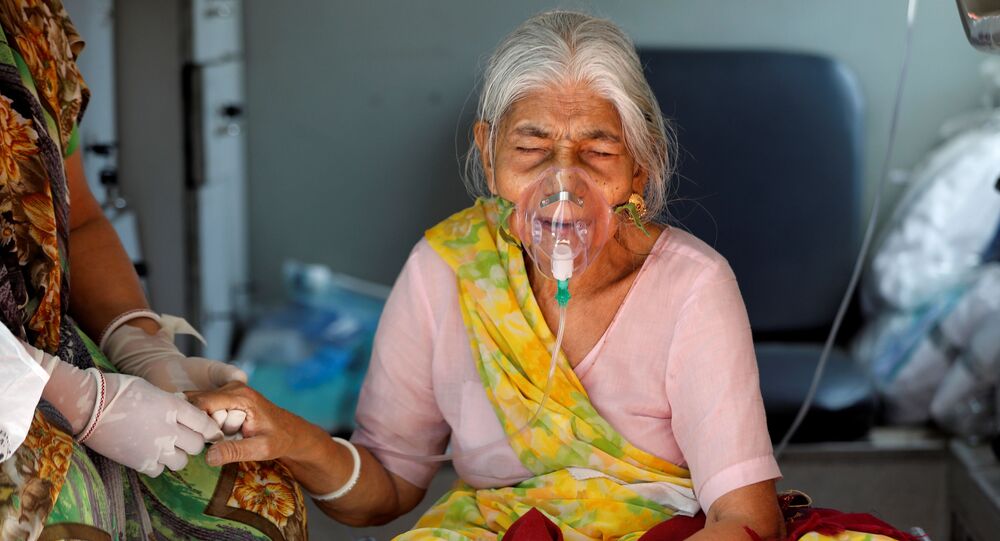 India is currently struggling to contain the outbreak of COVID-19, which has crippled its healthcare system, with thousands waiting for hospital beds, oxygen, and ventilators on a daily basis. The devastation may escalate in the coming days, as the virus is spreading in rural parts of the country.

India has reported 10 million cases over the last four months; however, experts worldwide suspect the official numbers of deaths and infections are grossly underestimated. In an interview with Sputnik, Dr Monalisa Sahu, consultant on infectious diseases, who is practising at Yashoda Hospital, Hyderabad, shares her experience working in a COVID care unit and how mutations are changing the disease's nature in the country.

Sputnik: What has changed in the second wave of COVID-19 in India? What went wrong?

Dr Sahu: There has been a staggering rise of cases of COVID-19 during the second wave in India. It could be ascribed to the lack of adherence to COVID-appropriate behaviour by the general public. The strict lockdowns that were imposed during the first wave, which had a major contribution in curbing the first wave, were not implemented during the second wave. Consequently, people were laxer in their behaviour and were little concerned about the measures to be followed to curtail the rapid spread of the disease. Mass gatherings have contributed to the manifold increase in the COVID-19 cases.

The high infectivity rates and transmissibility of the newer circulating variants, which have almost replaced the virus's initial strain, have further added to this burden. The new strain is highly contagious and fast replicating, enabling the virus to multiply at a rapid rate and hence the transmission of the infection is high.

Sputnik: Has India reached the peak yet?

Dr Sahu: The peak is expected by the end of the month of May. If we look at the trends of the last two peaks in the United Kingdom and the other European countries, the number of cases rose up to about 5-10-fold, believing the same for India and seeing the virus high infectivity rates and high transmissibility, the number of cases in India is expected to rise to about 750,000 (approximately) per day, it can also touch one million per day.

Sputnik: What are the reasons behind this massive surge?

Dr Sahu: Multiple factors are contributing to the surge of cases during the second wave.

The virus has undergone several mutations since its advent, with the newer mutant variants almost replacing the original strain of the virus. These more unique variants of the virus behave as new viruses, having an immune escape like phenomena, the population being more vulnerable to the newer variants of the virus. The high infectivity rates and high transmissibility of the virus have majorly contributed to this rapid surge. Significant behavioural changes have been observed, indicating a relatively lax attitude as compared to the first wave, in terms of the firm adherence to COVID-appropriate behaviour; implementation of strict lockdown measures must be initiated.

Sputnik: Can you explain why people should take extra precautions now? What's the mutation and what has changed in this infection?

Dr Sahu: As the virus undergoes replication, it modifies its genetic makeup, the process known as mutation. Certain mutations accumulate, providing a survival advantage to the virus, causing a multifold increase in its infectivity rate and transmissibility rate. Certain mutant variants also exhibit the properties of immune escape, behaving like a new virus.

People should take extra precautions now, as multiple variants of great concern from the virus have been circulating across other parts of the world and have also been detected in India.

The number of people infected with the disease is very high, consequently, hospital beds are in shortage, and the whole healthcare system is under tremendous stress. There is the inadequacy of oxygen, beds, and ventilators, and hence we need to dampen the surge so that the healthcare system doesn't collapse.

Sputnik: On 1 May, mass vaccinations started, but reports of the non-availability of vaccines are being made by many state governments. How do you see the whole situation being managed?

Dr Sahu: The population of India is about 1.3 billion, which is too large compared to most of the other countries across the world. When the vaccination drive began in the country, they targeted the high-risk groups, the healthcare workers, and then the elderly, which was a very appropriate strategy.

Some amount of vaccine wastage has been reported, but the government has done a satisfactory job in the vaccination programme.

Sputnik: What should have been done in such a scenario - policy-wise or at the management level?

Dr Sahu: The prediction of the second wave of COVID in the country was always on the cards. Keeping in view the multiple waves of COVID in the other parts of the world, India could have made better preparation in terms of oxygen beds, ventilators, and improving the supply chain of the healthcare sector.

Some states like Kerala have done the job quite well, increasing their oxygen beds by up to fivefold. Mobilising other resources to help the healthcare sector, like increasing paramedics and the nursing workforce, can also boost the preparation.

The current wave, the overwhelming number of cases, has caused the healthcare sector to burn out of its capacity, thrusting the whole system into tremendous stress.

Attempts should be made to impose stringent measures to contain the spread of the disease by actions such as lockdown and increase the magnitude of the supply of essential drugs, oxygen, beds, and ventilators to tackle the current grim situation with some ease.