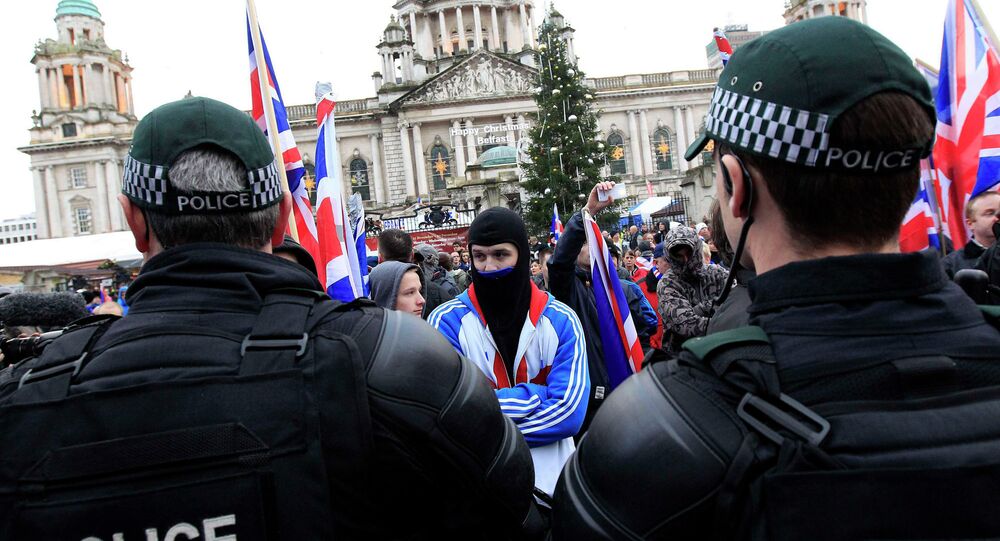 What's Behind the Recent Wave of Violence in Northern Ireland and Why Did Biden Intervene?

Earlier this week, the Biden administration voiced concerns over the ongoing violence in Belfast and called for calm in Northern Ireland’s capital. At the same time, the long-standing conflict between Unionists and Republicans is proving, as it always has, difficult to resolve.

Dr. Margaret O’Callaghan, a Belfast resident, political analyst, and historian spoke to Sputnik about the current turmoil in Northern Ireland. In her view, there are several reasons for the riots from disagreements over border protocol to Covid and the funeral for senior IRA figure Bobby Storey. She says the protestors have no leader and are not politicised to the extent of having demands.

Sputnik: Joe Biden has expressed concerns over the current situation. This is not the first time he's spoken out on Northern Ireland's peace process, saying that, "they can't allow the Good Friday agreement that brought peace to Northern Ireland to become a casualty of Brexit." Do you think the US has the right to weigh in here?

© REUTERS / JASON CAIRNDUFF
Biden Administration Calls for Calm in Northern Ireland Amid Worst Violence in Years
Dr. O’Callaghan: I'm not sure I'd quite use the language of “weigh-in.” I think he's expressed an interest which could be seen as support. The actual Good Friday agreement in 1998, its brokering was assisted by [US President Bill] Clinton when he was Democratic president. So there's a tradition, if you like, within the Democratic Party of taking an interest in maintaining that settlement in Northern Ireland. So I see his intervention as supportive rather than threatening.

Sputnik: How might the US help protect the Good Friday Agreement?

Dr. O’Callaghan: In the past, it has appointed brokers, people like Senator George Mitchell. The US also played quite a direct role in funding. And at the moment, I suppose during the Brexit negotiations with the European Union, I think there were suggestions from within Biden's camp that it would be appropriate if the UK government took on board the concerns of the Good Friday Agreement, which they didn't appear to do at certain stages during the Brexit negotiations. So it's kind of honest brokering. I don't see it as particularly heavy-handed, but I suppose from a UK point of view, the attitude of the American president is important because they are looking to do free trade deals now, after Brexit, internationally.

Sputnik: Do you agree that the Biden administration is blaming Brexit for the current turmoil?

Dr. O’Callaghan: I don't think they are pinpointing it as the sole cause, but certainly, the instability that came about as a result of Brexit has destabilised things that looked fairly stable here before that. So, for example, the majority of people within Northern Ireland voted against Brexit. But of course, we're just a part within the United Kingdom. So that had constitutional status, as such. And I suppose Brexit was discussed in Britain without any attention being given to the fact that Northern Ireland, which is technically, actually, part of the United Kingdom, shares a land border with Ireland or the Republic of Ireland, which would be within the EU, so that whole dimension of Brexit was improperly understood, not discussed, and not really explored in Britain during the whole period of the Brexit campaign.

© AP Photo / Niall Carson
Anti-Brexit billboards are seen on the northern side of the border between Newry, in Northern Ireland, and Dundalk, in the Republic of Ireland, on Wednesday, July 18, 2018.

Sputnik: What other issues, apart from Brexit, have caused the current turmoil?

Dr. O’Callaghan: Covid, for example, has all kinds of consequences, and there is a local issue here, which is that one side of the peace settlement, that is to say, a section within the Irish national side conducted a funeral in defiance, in apparent defiance of Covid regulations. It is a huge issue because other people have to bury their dead, not go to the funerals, have loved ones die, not be beside them. So this so-called Bobby Storey funeral, the Sinn Fein are one of the parties in government, seem to bring hundreds of people out onto the street, gave respect to Bobby Storey that was not given to the relatives of others. So for the loyalist population here, that is to say, those who are loyal to Britain, that was a slap in the face.

Plus, one of the out workings of Brexit now is that they feel there is a border not on the island of Ireland, but they say in the Irish Sea. And plus loyalists, and you could say what's happened here over the past 50 years has been an equalising of relationships between the two communities which were put in place by the partition of Ireland in the 1920s. But that, as you know, an equalising process often feels to the group who are deemed perhaps in the past to have been in a slightly stronger position, to them it looks like: "lose, lose, lose." So it's a combination of factors as a result of Brexit. The question was, what kind of Brexit was the UK going to go for?

© AP Photo / Peter Morrison
Why Northern Ireland Still Remains A Sectarian Tinderbox 25 Years After The Good Friday Agreement
So if the UK had been primarily concerned about the union with Northern Ireland and with Scotland, they might have gone for a slightly more accommodating withdrawal Brexit, but they went for maximum withdrawal Brexit, absolute, too poor. Northern Ireland is within the EU. So, for British loyalists who are hostile towards Irish nationalism, this feels like a diminution of their “Britishness.” So it's Brexit, it's Covid, and it's those things together that have destabilised the country at the moment. And also I suppose it's because Northern Ireland was established in 1920 as a haven, if you like, for those who are loyal to Britain and Ireland, those who supported the union with Britain, when you got an independent Ireland. And when the borders of Northern Ireland were drawn up, they were drawn up with an inbuilt majority for those unionist people. But in the 100 years since then, there's an equaling out of the demographics between unionists and nationalists. And this also destabilises the stability and security of loyalists because they fear constitutional change. Because constitutional change is provided for in the Good Friday Agreement if a majority within Northern Ireland and in the Republic of Ireland vote for it.

Sputnik: These riots have been going on for a week and a leader has not been identified for either side. Will this situation change soon, and who could step up here?

© REUTERS / Jason Cairnduff
Police Use Water Cannon in Belfast as Mass Protests Continue to Plague Northern Ireland - Videos
Dr. O’Callaghan: Well, they're quite low-key riots, they're very localised. They're mostly kids under 15 or 16. They've slightly different motivations in different places, in certain working-class estates outside Belfast, they are deemed to be run by paramilitary groups who are worried because the police are on the brink of convicting them for drugs and other offences. In places in south and west Belfast they are near interface areas, there are young kids, whether they're self-motivated or pushed out by older people – we're not quite clear. It's very, very small scale and low scale.

But it, if you like, has been facilitated, by the leader of unionism, Arlene Foster, having a separate row with the head of the police over the Bobby Storey funeral. So she's expressed a lack of confidence in the police. So it's kind of rippling through unionist culture, if you like, from the leadership at the top, right down to kids at street level. Can they believe in the police or not? And of course, one of the aspects of the Good Friday agreement was the reform of policing here. And it's pretty important that the public retain confidence in the police, which most people do have in the present.

Sputnik: How are forces distributed between protesters? Which side is the most active?

Dr. O’Callaghan: The protests have been loyalist protests. They have been within the unionist loyalist community, except for, I think, the last night in Belfast, where you have what we call interface areas: loyalists on one side, republicans on the other. Normally quite OK, but with a gate between them and because you do have a lot of loyalist’s kids out protesting on their side, you got a lot of nationalist kids coming out protesting on theirs. I think the police are trying to keep it low-key. Insofar as they can.

Sputnik: What about the protestors demands?

Dr. O’Callaghan: They are not politicised to the extent of having demands, they do not have leadership from within their own community, higher up. But senior loyalist politicians have been complaining about Bobby Storey, about this funeral, about concessions to nationalists. And there may be a feeling within the loyalist community that they are losing their Britishness. So, being British, the Union Jack, the royal family, the British monarchy, these are all symbols that are important to British loyalists; Irish-British loyalists, who are the lead protesters at the moment.