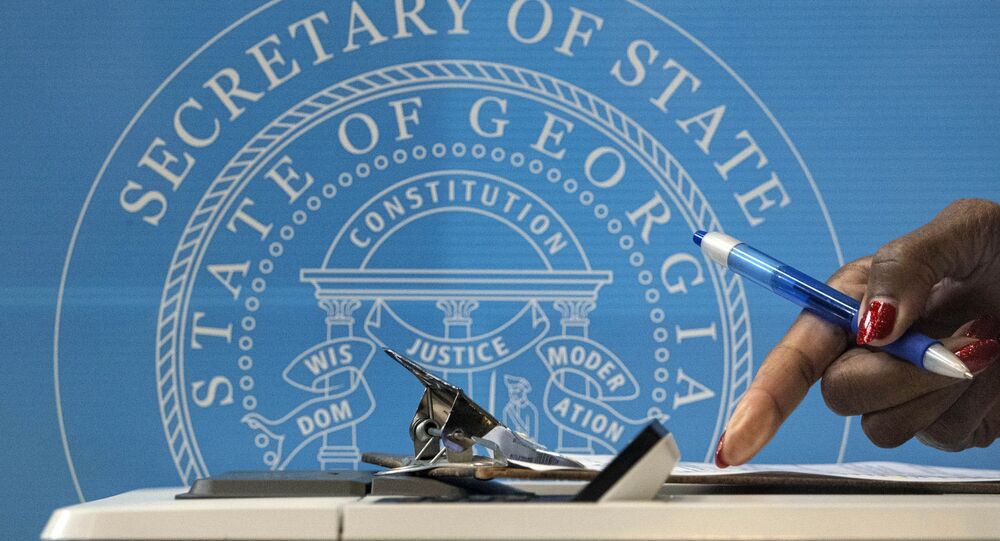 Former President Donald Trump has hit a number of Georgia-headquartered companies and sport clubs with harsh criticism over what he called "interference" in America's "free and fair elections." He urged his followers to ditch their services and products. US observers have discussed why Big Business is trying to twist Georgia lawmakers' arms.

On 2 April, former President Donald Trump called for boycotting Major League Baseball (MLB), Coca-Cola, Delta, and other "woke companies" which openly criticised Georgia's latest election integrity reforms. The new legislation requires photo ID for absentee ballots, removes improper names from mail distribution lists, halts the acceptance of absentee ballots within 11 days of an election, prohibits third-parties from giving gifts to voters standing in line at a polling place, and enforces sanctions for violations. However, the companies have denounced the law as undermining democracy in the US.

"Corporations lecture the government because they can," John Tures, political science professor at LaGrange College in Georgia. "In the past, Republicans didn't mind this happening, because they felt they agreed with big business. Now that they disagree with big business, maybe they'll realise that nobody should have a disproportionate amount of power in the system."

They went woke, so let’s make them go broke. pic.twitter.com/hQr5qMZEbH

​Big Business is accountable only to its shareholder meetings and corporate boards, not ordinary Americans, the political scientist notes. However, US corporations do rely on customers for income, therefore, if citizens can come together, they can have more power in the system, Tures believes.

How many jobs and how much money will Brian Kemp and Republican legislators cost the state of Georgia because of their desperation to suppress votes?

​Republican Georgia Gov. Brian Kemp signed the Election Integrity Act of 2021 into law on 25 March. The legislation was prompted by controversy surrounding the 2020 elections and last-minute loosening of voting rules in a number of swing states amid the pandemic. GOP officials in over 40 states are pushing ahead with similar restrictions to ensure that only eligible voters will cast their ballots in future elections and primaries.

Now, it’s not just Black people who can cut through words to see their real motives.

EVERYBODY can see their suppression for what it is

​However, Georgia's voting restrictions were denounced as "racist" and targeting "non-white voters" by a number of black civil rights groups such as the National Black Justice Coalition (NBJC), Black Voters Matter, and the African Methodist Episcopal Church which urged Georgia-headquartered sport clubs and firms to take action over the legislation. If "Coca-Cola wants Black and brown people to drink their product, then they must speak up," Bishop Reginald Jackson, who leads a group of over 500 African Methodist Episcopal churches in Georgia, said during a rally on 25 March.

New York has nine days of early voting. Georgia has a minimum of 17, with an additional two Sundays as an option for every county.

New York requires an excuse to vote absentee. Georgia does not.

They’re lying and they know it. https://t.co/XxOc1ZAAAa

​Following the passage of the election integrity bill, the MLB announced that this season's All-Star Game and draft would be moved out of Atlanta as a reprisal. Later, Delta and Coca-Cola also raised their voices against the law calling it "unacceptable." According to CBS News, the business lobby in Georgia, which is home to 18 companies in the Fortune 500, "wields significant clout in state politics."

Georgia Gov. Brian Kemp: "We will not be intimidated and we will also not be silenced. Major League Baseball, Coca-Cola and Delta may be scared of Stacey Abrams, Joe Biden and the left, but I am not." https://t.co/tiP897JkMk pic.twitter.com/DmovRjVMVq

​The fuss over the law is especially surprising given that it addresses obvious voting irregularities and proposing measures to ensure election integrity, notes Mark Dankof, former US Senate candidate and investigative journalist. Corporations and sport clubs appear to have weaponised the "racism" card in order to promote a specific political agenda, he says.

"The claim of Major League Baseball that this is an inherently racist proposal that denies people of colour the right to exercise their voting franchise, fits in entirely with Major League Baseball’s ideological merger of Multinational Corporate Capitalism with Cultural Marxism among the vast majority of professional sports owners, both in baseball and in the other major sports, including the NBA, the NFL, and the NHL," the investigative journalist argues.

The unfolding situation is a "perversion of the use of MLB and professional sports in this country," continues to Dankof. Furthermore, "it's a threat to freedom of speech, freedom of thought, and what was once an understanding that Americans of seriously divergent political, cultural, and spiritual views and values left these things to be debated in the political arena and decided at the ballot box, or discussed among family members and friends in a spirit of civility," he warns.

The White House endorsed MLB's move with Joe Biden labelling the legislation as "Jim Crow on steroids." The president poured gasoline on the fire with his claim that the Georgian law requires closing a polling place at 5 pm which is not the case: "This is all about keeping working folks and ordinary folks that I grew up with from being able to vote. Come on," Biden told ESPN on 31 March.

Here's over a minute and a half of White House Press Secretary Jen Psaki blatantly lying about the Georgia voting law -- absentee voting, early voting, poll hours, water...just about everything.

I believe it was Fox Business's @EdwardLawrence who did a great job grilling her. pic.twitter.com/DeflX3Z0qk

​The provision mentioned by Biden concerns early voting on Saturdays, which has actually been expanded, not reduced, under the new law. However, White House Press Secretary Jen Psaki refused to acknowledge the president's mistake: "No, our tone is not changing," she said on 1 April in response to the question from Fox Business' Edward Lawrence.