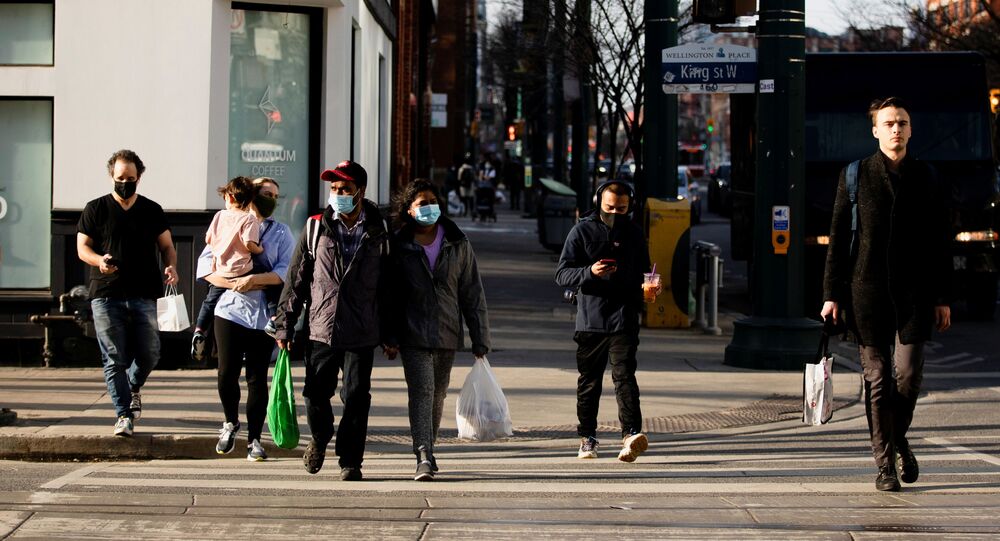 'People are Both Relieved & Frustrated', Says Toronto YouTuber About Post-Lockdown Mood in the City

According to John from the YouTube channel "Johnny Strides" and a person who explored the streets of Ontario's capital for more than 2.5 years while making a series of videos called "Toronto Walks", the lockdown damaged many local businesses, with some of them still closed and others likely to remain shut forever.

Sputnik: On 8 March, Toronto entered what the authorities call the grey zone. Stores that sell non-essential goods are allowed to open at 25% capacity. Restaurants and hair salons remain closed until further notice. You spend a lot of time in the streets filming your videos, you get to talk to people. What's the atmosphere like?

John from "Johnny Strides": I think there's both relief and frustration. I think people are glad to be out and supporting businesses. But the fact that they can't go to a hair salon or restaurants is really-really frustrating for a lot of people. So, the people outside are really glad to be outside to shop.

But there are a whole lot of people that are frustrated that it's only a partial re-opening, because there's really no science or data that shows that restaurants should stay closed, so it seems unfair that some businesses are punished. That's the feeling I get just by talking to people – people are happy, but still frustrated.

​Sputnik: In your live streams – on the main channel "Johnny Strides" and on your second one – "Johnny Stumbles" you walk past many closed doors - chain businesses, like Starbucks, family-run shops and cafes. Now that the shopping malls are open again, it appears that big brand name stores are doing okay. Do you think smaller ones will be able to recover as well, or they will close down permanently?

John from "Johnny Strides": I think a lot of them that closed are going to stay closed. They just don't have the financial resources to survive. The government assistance has been not adequate for a lot of them. So, I think the stores that survived the lockdown will probably be okay, because people are going to go out and support them, but the ones that closed or are about to close – I think there is so much debt – I don't think we'll see them open again.

Sputnik: Some Canadian observers noticed recently that during lockdown, Toronto's demographic started to change with many locals leaving the city for the suburbs, and with thousands of newcomers – most of them immigrants, populating the central part. There's also a lot of concern about real estate prices skyrocketing in the past year. Have you been seeing any of that?

John from “Johnny Strides”: In terms of people leaving the city and immigrants coming in – I haven't observed that. But the real estate prices – it's interesting because housing prices continue to go out of control, but rent prices actually went down. So, that might speak to what you said about immigrants being able to move to the city and afford it because it's cheaper – maybe, I'm just speculating. Rent has gone down but the housing costs have not. Our real estate – you're probably aware, we have one of the hottest real estate markets in the world, with some of the most expensive housing. And that is not slowing down, so, you figure that someone like me could buy a house someday, but it looks impossible now.

​Sputnik: According to a recent study published by an Ontario-based company Scarsin, there might be a third wave of coronavirus infections in the province by April, mainly due to new strains of COVID-19, which may lead to another lockdown. If it happens, do you think people would readily accept new restrictions?

John from "Johnny Strides": I don't think so. Now that the nicer weather is here everybody is outside. I think everybody is so exhausted and fatigued, that obviously some people are going to stay in, some people are still staying in. But as a whole, I think there is too much fatigue. The general public – they're gonna keep going outside. And we saw that last summer: as soon as the weather got nice – the parks were full, the beaches were full. They were telling people to stay inside and don't socialise, but it didn't happen. And I think now we're definitely going to see more and more people going outside regardless of the situation.