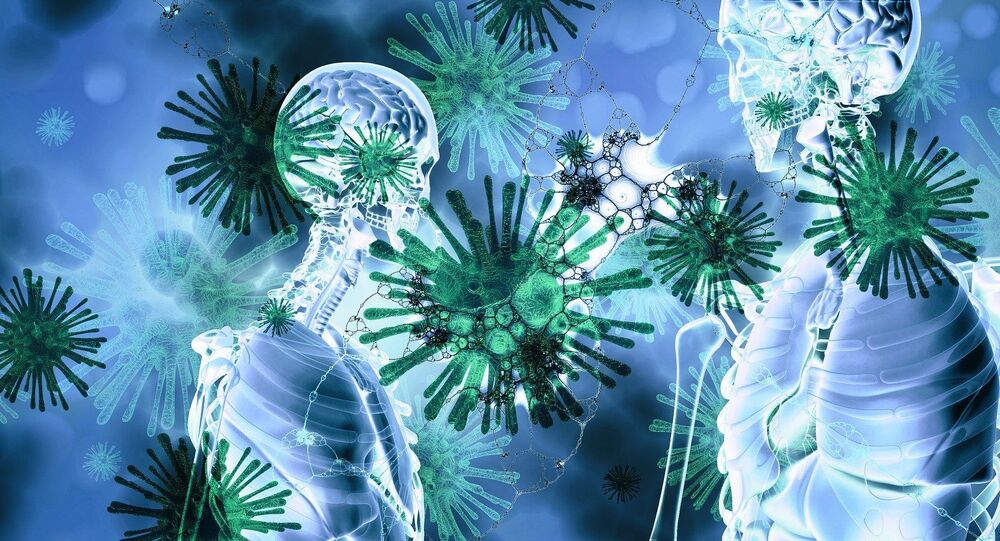 COVID-19 is a Perfect Storm for Conspiracy Theorists, Analyst Says

Conspiracy theories are as old as time, manifesting increasingly in public unrest and often as a result of mistrust in government. The rise of social media has provided conspiracy theorists with a worldwide platform to spread stories and amusing or disturbing delusions about global events.

The rise of conspiracy delusion has been clearly evident throughout the pandemic, as theories and beliefs about COVID-19 have spread across the internet like wildfire, causing and creating mythology and misconception. Like the virus itself, conspiracy theories infect believers and online platforms become infested with philosophies seeking to explain the coronavirus as a hoax and declaring without evidence that vaccines are a method for implanting microchips in humans to control the population.

Daniel Jolley, a senior lecturer in psychology at Northumbria University, shared his thoughts with Sputnik on whether we should be concerned about conspiracy theories and what effect they have on a society in which information can travel instantly to any location on the globe with the click of a button.

Sputnik: Why do conspiracy theories tend to prosper in times of crisis?

Daniel Jolley: So during a crisis, it could be a virus outbreak, could be a rapid political change, could be a terrorist attack. These events breed uncertainty. They make us feel powerless. And we also want to know what has happened. And a conspiracy narrative can seek to address some of those needs and questions. It explains this complex event, which they offered in a very simple way, which is really appealing. And to suggest that, for example, COVID-19 is caused by the government or something else offers a tangible scapegoat, it makes you kind of feel better, that it's not a crazy world out there, but rather it's something that is motivated, and there's a pattern, it's the government, who are doing shady things. So they seem quite appealing and that's why every large event, every crisis, has conspiracy theories associated. And of course, COVID-19 is no exception. It's a worldwide phenomenon that has bred conspiracy narratives.

Sputnik: Has the COVID-19 pandemic added to conspiracy theories?

Daniel Jolley: Conspiracy theories have been around since the start of time; they are not new. So, way back in February, last year, I was with a colleague and we thought about some of the theories that were coming up, and potentially reasons why, and the consequences of endorsing those beliefs. And this was back in early February. And what we found is that some of these indeed came true. That people when they felt uncertain, when they felt powerless, believed in COVID-19 conspiracies, and then as a consequence, they will, then, you know, we’re not following guidelines. Because if you don't trust the government, why would you follow their recommendations based on isolation, based around vaccines, because, of course, they're 'doing shady things'. So COVID-19 is a perfect storm, in essence, for conspiracy theorizing.

Sputnik: How responsible is social media for the spread of conspiracy theories?

Daniel Jolley: So social media, the internet broadly, is a really interesting kind of problem and question. So the internet has obviously brought information to our fingertips more easily than ever before, which is both mainstream information but also misinformation. But it's worth noting that, as I mentioned, conspiracy theories have been around since the start of time. The JFK conspiracy and assassination is extremely popular right across the world. And this conspiracy was born before the internet, it prospers before the internet, which is a good example to highlight that, if we had no internet today, it would soon have disappeared. Conspiracy theories still exist, because it's part of our psychology.

So in a way, they're more easily spread online, which is absolutely true. But there's no hard data to suggest that they're more popular in their beliefs. Because people are always talking about conspiracy theories. And they're always drawing on these narratives. I mean, here's a good example of this as well, of course in America, where Trump was taken off Twitter, Facebook, and also some prominent followers who were talking about constructive narratives. Their beliefs have just transferred to other platforms where they are allowed to talk about those things. So in a way, it's just by removing them from social media hasn't stopped that narrative. Instead, it's changed platforms. To get to the point, the internet is important, and it certainly makes them more transmissible, but they still exist without the internet, which I think is really interesting as well.

Sputnik: Can the spread of conspiracy theories online affect the thoughts and beliefs children and teens?

Daniel Jolley: The role of the internet and in children is a really key question. And, until recently, we actually knew nothing about conspiracy theorising in young populations, all the attention has been on adults. But in our new research, we found that conspiracy theorising is flourishing in younger populations. And particularly, it seems to be age 14 when these beliefs seem to really flourish, in comparison to other ages. And it is a specific point in time when young people are relying less on emotional regulations so that they are relying less on adapting their emotions. So that is kind of being in the moment, which means that we can increase anxiety, which we know can produce conspiracy beliefs. And of course, they also rely on social media more than other parts because typically it is when you're allowed to have a social media account, and they there may be exposed to a variety of different sources. And of course, the COVID-19 pandemic has meant that young people are spending more time online because that's how they're interacting with their peers and teachers. Which means there's a possibility that they could be exposed to misinformation and conspiracy theories more than other times in history, potentially.