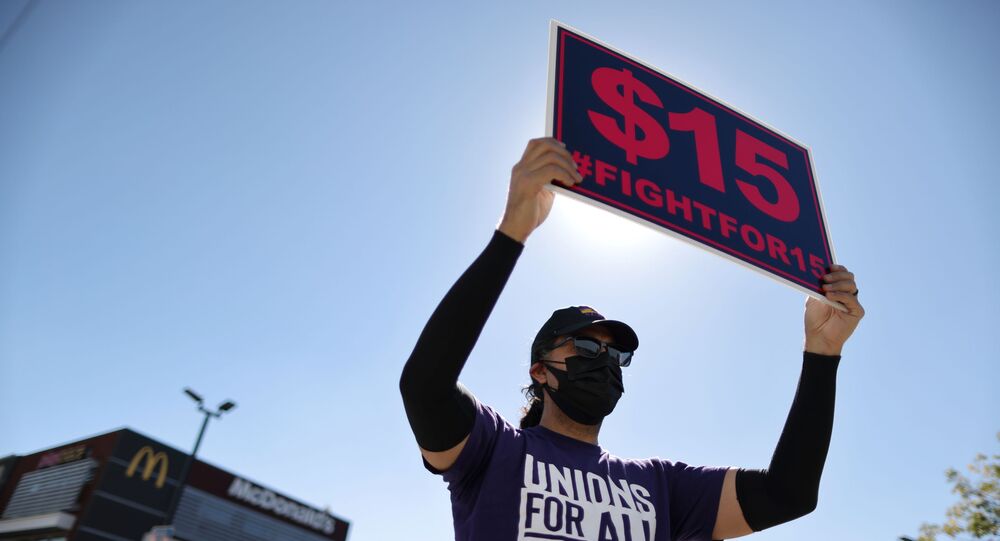 The proposal to raise the minimum wage in the US to $15 an hour, put forth by US President Joe Biden, has not been included in the country's coronavirus relief bill, as was initially promised by the Democratic Party. House Democrats passed a bill including it, but it will be left on the cutting room floor when it gets to the Senate.

Timothy Hagle, a political science professor at the University of Iowa, argues that despite the minimum wage provision not being included in the coronavirus bill that will hit the Senate floor, Democrats will not want to jeopardise other provisions they support by voting the bill down.

Sputnik: How can the ditching of the minimum wage provision from the COVID relief package affect the unity of the Democratic Party, given that progressives were very supportive of it?

Timothy Hagle: This is an interesting question. On the one hand, not having the $15/hr provision might guarantee a few moderate Democrats in the Senate would be more likely to support the resulting stimulus bill. On the other hand, more progressive Senators might balk at not including that provision. The concern of progressives is that it's unlikey the $15/hr provision would pass on its own. That means it would need to be included in some other bill that would make it hard for other Senators to vote against it.

Even so, given the current even split in the Senate, Republicans could filibuster any regular bill. The opportunity that currently presents itself is that under reconciliation only a majority is needed to pass this bill rather than the usual 60 votes to end debate under filibuster rules. Unfortunately for the Democrats, there are certain rules about what can be part of a bill under reconciliation, the so-called Byrd Rule. The requirement is that the provision involves taxing and spending. The parliamentarian ruled that the $15/hr provision doesn't qualify, so can't be included.

Not surprisingly, several progressives, in particular some members of the US House, have criticised the parliamentarian and complained about the ruling. Senator Sanders has said that the provision must be included in the stimulus bill and has urged his Senate leadership (i.e., Schumer) to find a way to include it.

One way might be to get rid of the filibuster rule. This is something Democrats have talked about, but at least one Democrat (Manchin of West Virginia) has said he'd not support such a move.

On the whole I don't think that not including the provision would hurt party unity that much, but it could certainly lead to some vocal reactions and the Biden administration would need to do some damage control by promising to find another way to get to that goal.

Sputnik: How can disagreements within the party ranks affect the passage of Biden's COVID Relief Bill?

Timothy Hagle: Assuming that the $15/hr provision doesn't make it into the bill in some way, it doesn't seem likely that Democrats would vote against it. There are lots of other things in the bill that they support and they wouldn't want to jeopardise getting them. What they can do is object strongly to not having the $15/hr provisions and possibly extract promises from either Senate leadership or the Biden administration to find other ways to achieve that goal.

Sputnik: Does the disposal of the minimum wage provision indicate that the Biden administration can deviate from its campaign pledges in the future?

Timothy Hagle: The Biden administration would likely argue that it isn't deviating from its pledge, just that it needs to find a different way to achieve it. More generally, it's not unusual for presidential candidates to make promises on which they can't deliver. In the case of Biden, although Democrats control both houses of Congress, the margins are so small that it will make major or controversial changes difficult. It also means that it's easy to blame Republicans for blocking some of his policy objectives. Biden has used Executive Orders to achieve some policy objectives but there are limits to that approach. At times he will need to get Congress to act. If they don't, then he can use that as a political issue for the 2022 and 2024 elections.