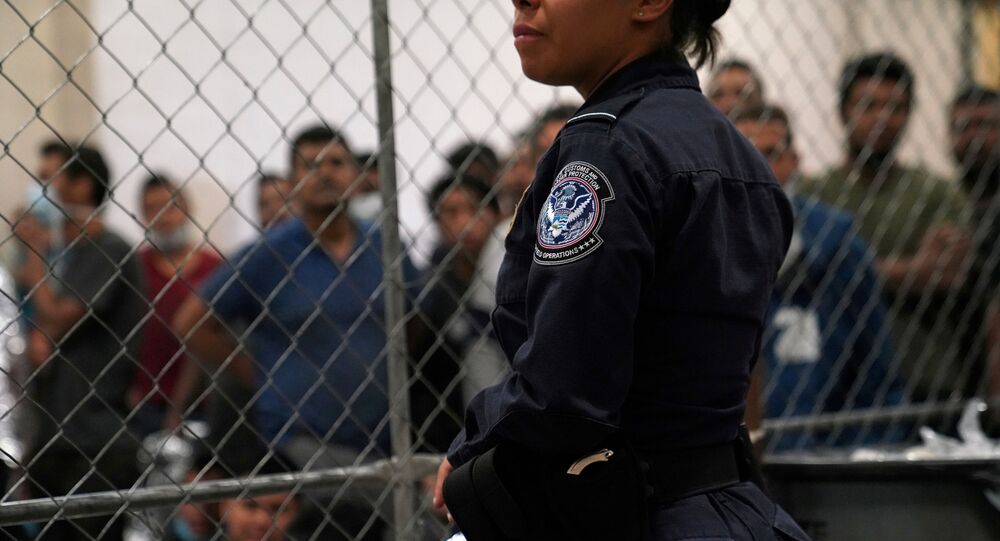 Biden Wants to Reward Groups That Helped Him Get Elected, Scholar Says on POTUS’ Immigration Policy

The US labour market has been one of the hardest-hit areas in terms of the coronavirus pandemic. While Donald Trump's stance was about decreasing the influx of migrants to secure jobs for Americans, Joe Biden sees things differently.

Jessica M. Vaughan, director of policy studies at the Washington, DC-based Centre for Immigration Studies, has explained to Sputnik how Joe Biden will craft the US immigration policy in the wake of Donald Trump's legacy.

Sputnik: Joe Biden has reversed a series of executive actions taken by Donald Trump, including an order that blocked many Green Card applicants from entering the country. What is the primary objective of such a policy?

© AP Photo / Marco Ugarte
Biden Revokes Trump-Era Order Suspending Green Cards for 'Risk' Immigrants
Jessica M. Vaughan: Trump's objective was to slow down the influx of new workers into the United States so that Americans who had been laid off or lost jobs because of the pandemic shutdown, would have first access to new jobs. And also to slow the spread of the coronavirus worldwide. The Biden administration seems to believe that these new arrivals will not get in the way of Americans returning to work and believes that it will be possible to limit the spread of the coronavirus with these new arrivals. It's hard to know for sure because the exact rules have not been announced, but it's clear that they simply want to overturn the Trump policy and allow immigration to continue regardless of the pandemic.

Sputnik: How safe is it now to ease immigration amid the pandemic?

Jessica M. Vaughan: I don't think it is safe at this time and most countries in the world don't think it's safe at this time, because there are restrictions on travel throughout most of the world, either barring people from entering or requiring people to quarantine for periods of time after arrival. And it has not been announced that Biden wants to have any of those controls. So we have to assume that these new arrivals will be coming straight to our communities. But I think it's even more of a problem that they will have immediate access to the labour market. And this could cause problems for Americans who've been displaced because of the pandemic and who need these jobs as well. And also remember that we're in a very difficult time for illegal immigration, too. As Biden has let up on border security, we now have thousands of new illegal immigrants coming in every single day.

© AFP 2021 / Guillermo Arias
Haitian migrants seeking asylum in the United States, queue at El Chaparral border crossing in the hope of getting an appointment with US migration authorities, in the Mexican border city of Tijuana, in Baja California, on October 7, 2016

Sputnik: About 10 million of the 22 million workers who lost their job as a result of the pandemic remain unemployed, which could account for the unemployment rate reaching a historic high of 6.3 percent in January. Why is the Biden administration so focused on immigration rather than tackling unemployment among US citizens?

© CC BY 2.0 / liz west / Greed
US Economy Could Improve in 2nd Half of 2021 But Long Way for Jobs Recovery - Fed Chair
Jessica M. Vaughan: There could be a couple of reasons. For one thing, Biden has rejected the arguments of the Trump administration and others that there is a noticeable effect on the labour market and fiscal cost to legal immigration. Even though these costs have been well documented in government data. A lot of this is most likely political for Biden. He wants to reward certain groups that helped get him elected. And he made promises during the campaign that he would increase immigration and increase benefits for immigrants and let in more immigrants. So part of it is fulfilling his campaign promises. But also he is clearly interested in creating the conditions for a permanent or near-permanent Democrat majority, because he's going to try to put as many people as possible who are immigrants on a fast track to citizenship. So they will be able to vote as soon as possible. And he believes that will mean that they will vote Democrat if he is the one who puts them on the path to citizenship. So I would say it's more political than economic.
© CC0 / Pixabay
Thirteen US States Sue Trump Administration Over New Green Card Rules - Reports
Sputnik: How will Biden's “open border” policies and crafting a path to citizenship for the undocumented affect the US economy in general?

Jessica M. Vaughan: It will have a profound effect on the US economy. His bill now before Congress contemplates legalising all illegal migrants who've arrived since 1 January of this year and admitting all of their family members abroad right away with work permits. And this is going to be a shock to the labour market. A surplus in workers means that wages are likely to decline and it's going to increase the number of people who can't find a job or are forced to work part-time or may drop out of the labour market altogether. And that increases the number of people who are going to be dependent on public assistance. It's going to be expensive and difficult for Americans and legal immigrants who've been here for some time to compete with this new influx of millions of workers into the workforce.

Sputnik: Almost every move of Biden is described by the mass media as erasing Trump's legacy, especially when it comes to immigration. At the same time, his administration reopened a detention site for migrant children which is expected to hold 700 kids between the age of 13 and 17. How does that sit with Biden's desire to repeal laws relating to Trump's immigration policies?

Jessica M. Vaughan: Well, Biden is finding out that some of these policies that Trump had were done for very important border security reasons and Biden's statements, in the campaign and after he became president, that he was going to let people in over the southern border have caused a new influx of people trying to get here illegally. And the promise of amnesty is also motivating people to come here illegally. So he's finding now that to avoid a crisis at the border, he's going to have to not release people immediately and at least avoid the optics of a mass influx of people at the border. And that would be politically damaging. So he's kind of scrambling now, but it really is already out of his control and I think already has created problems for him politically. But the problems are going to continue in the communities that are forced to accept all of these new migrants.