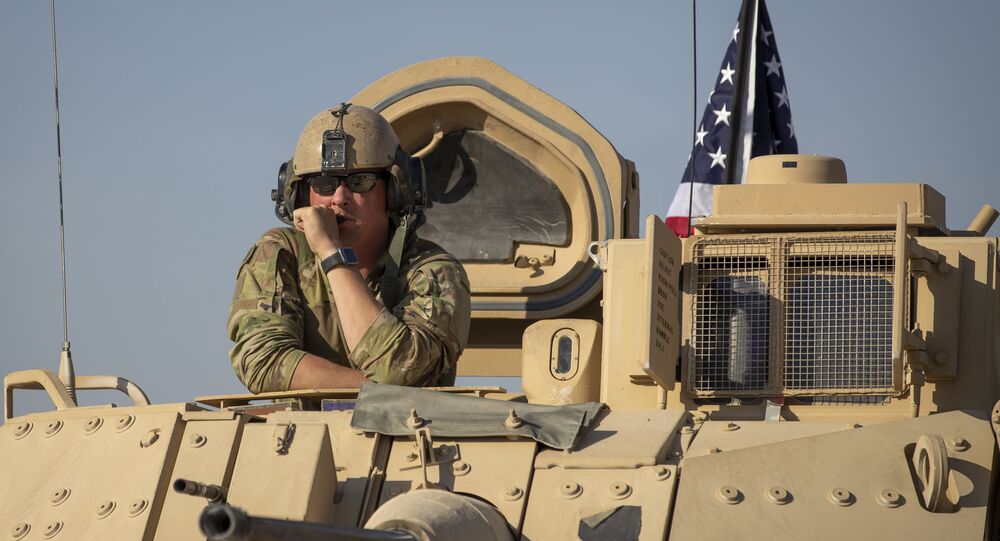 On Thursday night, the US carried out airstrikes against "Iran-backed" militia in eastern Syria, claiming that they were conducted in response to recent attacks on US forces in Iraq.

Seyed Mohammad Marandi, a professor at Tehran University who was part of the Iranian delegation that helped to negotiate the 2015 nuclear deal, reflects on the possible consequences of the latest US airstrikes on Syria and explains what the reason behind this operation could be.

Sputnik: What message is the Biden Administration sending with the latest strike against what it calls "Iran-backed militias" in Syria?

Seyed Mohammad Marandi: First of all, this attack was carried out against Iraqi citizens, who were a part of the popular mobilisation force, which is a part of the Iraqi state structure. Their duty in the east of Syria was to fight ISIS (Daesh*), so the Americans effectively murdered Iraqi soldiers that were fighting it. In other words, the Americans were helping to strengthen ISIS, and this is not new, this is what the Israeli regime regularly does when it attacks Syrian government soldiers. We also know that ISIS uses territory that is occupied by the United States in eastern Syria to attack Syrian government soldiers. So, the message that the Americans are sending to the Iraqi people is that we're the boss, we occupy your country and we are staying here even though your parliament has voted for us to leave. We make the decisions, and if you resist, we will kill you and we will not necessarily kill anyone who has links to a strike on American targets, we will kill whoever we want, including your soldiers who are fighting ISIS.

Sputnik: What is the general sentiment in the Iranian establishment about the pledge by the new US administration to return to the nuclear deal?

Sputnik: What moves can we expect from Iran in response to the strikes?

Seyed Mohammad Marandi: The strikes were directed at Iraqis, they murdered young Iraqi men who were fighting ISIS. We shouldn't be fooled by the terminology used by Western regime-affiliated media. When they say ‘Iran-backed militias’, they're only saying this to hide the fact that they murdered Iraqis. And the fact that these troops that belong to the Iraqi armed forces and that are part of the popular mobilisation forces, the fact that they were killed inside Syria and nowhere near the American bases in Iraq shows that the intention was to weaken Iraq and to weaken Syria and to strengthen ISIS and thus to justify or to cement or to strengthen their occupation of Iraq. So, this is a smokescreen. It has nothing to do with Iran. They killed Iraqis fighting ISIS in revenge for Iraqis attacking the US, other Iraqis attacking US bases that are in Iraq despite the fact that the Iraqi parliament told the United States that they must end the occupation.

Sputnik: What are the chances that the JCPOA will be saved in the aftermath of the attacks?

Seyed Mohammad Marandi: Any barbaric act by the Americans in this part of the region creates greater mistrust and greater hostility towards the United States. Not only will it increase hostility towards the United States in Iraq itself, but it is seen as a sign of continued US imperial ambitions for the region at large. And therefore, it also creates greater mistrust in Iran as well. The Iranians, of course, had nothing to do with the airstrikes. The Americans did not target Iranians. They did not target Iranian facilities. They targeted Iraqi soldiers who were defending their country against extremists that have been funded for many years by a coalition of countries that included the United States, Turkey, Saudi Arabia and Israel, among others. So, this was a strike against Iraq and that's a foolish mistake the Americans are making. They can fool their own public, that's largely ignorant about the region, by saying these are Iranian-backed militias. But the reality is that the Iraqi people are resisting the US occupation and that ultimately the United States has murdered Iraqis and therefore they are angering Iraqis more than before and that is going to make the occupation more costly. Ultimately, the Americans are going to have to leave, whether they like it or not. The Iranian response with regards to the attack will just be increased scepticism towards the United States, which already existed. And therefore, it's not going to change anything fundamentally, but it's going to make Iran even more careful about dealing with the United States, especially with regards to the nuclear deal.

Sputnik: Can we expect Europe to take a firm position on Iran that differs from that of the US?

Seyed Mohammad Marandi: No, the Iranians don't see the Europeans as different from that of the United States. They are obedient. They will obey whoever is in the White House. They obeyed Trump and implemented brutal, ruthless and barbaric sanctions targeting women and children in Iran under Trump's orders and directives. Under Biden, they will do whatever Biden says. And so far, Biden is continuing with Trump's policies against Iran and continuing to target women and children, and therefore the Europeans will target women and children. The same is true with regard to policy in Iraq, Palestine, Lebanon, Syria, Yemen, Venezuela, Cuba, Afghanistan and everywhere else in this region and beyond in Latin America as well. The Iranians recognise that and they take that into consideration whenever they speak with the Europeans.