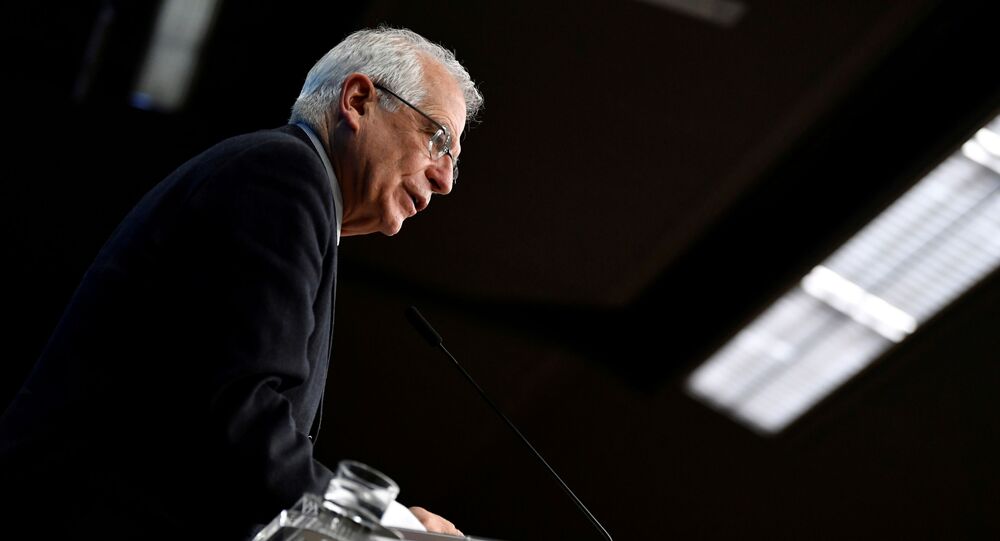 Calls for Borrell to Step Down After Moscow Visit Not Justified, Irish MEP Believes

MOSCOW (Sputnik), Jonathan Rowson - The mounting calls among European Union lawmakers for the bloc's top diplomat Josep Borrell to resign over his recent trip to Moscow are not justified, Clare Daly, an Irish member of the European Parliament, told Sputnik in an interview.

"I don't think we would have expected the scale of the opposition that has emerged", Daly remarked.

The Irish member of the European Parliament noted, as did Borrell during his address to lawmakers, that the Council of the European Union approved the visit. Daly added that she did not support the calls for the diplomat to resign as a result of his trip to the Russian capital.

"I wouldn't agree with any of them [European commissioners] and I've found Borrell to be particularly disappointing, but I wouldn't have joined the calls for him to resign over his trip to Russia", she stated.

Daly also said that there was rising anti-Russian sentiment in the European Parliament, driven by Eastern European lawmakers.

"In terms of the parliament though, there would be a huge amount of anti-Russian rhetoric, mainly from the Eastern European countries", the EU lawmaker said.

After his return from the Russian capital, Borrell made several comments criticising Russia, accusing the government of "progressively disconnecting itself from Europe." The Russian Foreign Ministry said remarks such as these contradicted the comments he made during his visit to Moscow.

According to Daly, Borrell may have done this to "pander to the critics," adding that the bloc's top diplomat had a responsibility to engage with the Russian government.

"Russia is one of our nearest neighbours ... It is a huge economy, a European neighbour, we absolutely should be developing friendly relations", she said.

Borrell visited the Russian capital from 4-6 February and held extensive talks with his Russian counterpart on the state of relations between Brussels and Moscow.

During a joint press conference alongside Lavrov, Borrell called for the release of Alexey Navalny, the opposition activist whose suspended jail sentence was rescinded two weeks ago due to probation violations.

The EU's top diplomat also expressed hope that the Russian-developed Sputnik V COVID-19 vaccine would gain approval for use in the bloc.

Borrell faced lawmakers on 9 February after his visit to Moscow for talks with Russian Foreign Minister Sergey Lavrov several days earlier. During the parliamentary session, the EU's foreign policy chief faced a barrage of criticism and many called for him to step down.

The parliamentarian said she believes that the European Union is using the situation surrounding Alexey Navalny as a "stick to beat" the Russian government with, adding that the bloc's attempts to use human rights as justification for its involvement in the affair contradicts its unwillingness to address violations carried out within its own borders.

According to Daly, the EU's response has been motivated by the bloc's geopolitical aims, rather than any concern for Navalny's human rights.

Daly also contrasted the EU's response to the Navalny case with its silence on the arrest of WikiLeaks founder Julian Assange in the United Kingdom, and the lengthy prison sentences given to Catalan independence figures.

"Given the contradiction that's there, it's patently obvious that the concern isn't about human rights, it's not about Navalny being imprisoned, as we call him a parliamentarian, because they don't care at all about the fact there are parliamentarians in prison in Spain for sentences of 10 years for holding a referendum. They don't allow the mention of Julian Assange", she said.

The Irish member of the European Parliament accused the EU of being reticent to address human rights abuses carried out within the bloc's borders.

At the same time she believes that Navalny's jailing is a "weak reason" to call for the imposition of new sanctions on Russia.

"Sanctions are not in anybody's interest. They're not in the interest of the populations of Russia or Europe. Businesses who want to do business with Russia don't want to have the sanctions … I don't see any merit in further ones. I don't see how they could justify them. Navalny seems to be a really weak reason for it", Daly remarked.

The European Union has hit Russia with several rounds of punitive measures since 2014, and Daly said that she stood firmly against the imposition of sanctions in any context.

"I don't agree with sanctions anywhere. They are a weapon used against populations. They are a new form of warfare and I just don't agree with them at all. So, the idea of calling for an increase in sanctions now. The question I'd pose back is 'for what?", she said, adding that current EU sanctions had "pauperised" many farmers who previously sent goods to Russia.

According to Borrell, who spoke in the European Parliament on 9 February after his trip to Moscow several days earlier, the bloc's foreign ministers will debate the possibility of imposing sanctions on Russia at a meeting on 22 February.

The heads of the EU's 27 member states are also expected to discuss the matter during a European Council meeting scheduled to take place on 25-26 March.

A Moscow court on 2 February ruled to send Navalny to jail for three and a half years, rescinding the suspended sentence given for his conviction in an embezzlement case.

The European Court of Human Rights has urged Moscow to release him from jail, a call which Russian Foreign Ministry spokeswoman Maria Zakharova said on Thursday violated Russian and international laws.

Large arms companies and their lobbyists are benefiting from the growing anti-Russian rhetoric in the European Parliament, contributing to a rising "militarism" within the bloc, Daly told Sputnik.

Commenting on the state of current EU-Russia relations, Daly said that she thought diplomatic ties between Brussels and Moscow had deteriorated.

"I do think things diplomatically are deteriorating considerably and I suppose … that a large part of that, in my opinion, is to justify the growing militarism in the EU", she said.

Daly said that some of the European Parliament's committees, including the Special Committee on Foreign Interference in all Democratic Processes in the European Union, contained members who espoused generalised anti-Russian views that were "not in any way source-based or referenced."

"The only people benefiting from that are the arms industry, and the big military-industrial complex lobbyists here are just rubbing their hands with glee every time new contracts and new budgets are mentioned for their shareholders to be enriched by this. It's not in the interest of the citizens of Europe at all", she said.

According to Daly, the EU has to create an enemy to justify this level of expenditure.

"For the first time now in this budget we have direct expenditure on defense coming from the main EU budgets. Obviously that's multiplied with member states' expenditure as well, and if you're to justify that level of expenditure, you have to have an enemy, and there's no doubt that all of the dialogue is framed as if 'the Russians are coming'", she said.

As part of the bloc's current Multiannual Financial Framework, the EU will establish the European Defence Fund, which the European Commission said in December will receive 7.9 billion euros ($9.5 billion) from the bloc's multi-year budget.

With the creation of the European Defence Fund, the EU will have a dedicated programme to support defence industrial cooperation for the first time, Thierry Breton, the European commissioner for the internal market, said in December.

Breton added that the scheme will help deliver "state-of-the-art and interoperable defence technologies."

Claims of Spy Base at Russian Embassy in Dublin 'Utter Nonsense'

Recent media speculation in the UK and the Republic of Ireland that the under-construction Russian Embassy in Dublin would contain a "secret spy base" is "utter nonsense," the MEP said.

"It was utterly ridiculous, a hyped-up sort of Cold War nonsense that the 'enemy is outside'. It's a really convenient mantra as well for the governments of Europe to have these 'sinister forces attacking us.' It is utter nonsense, it really is", Daly remarked.

The Irish member of the European Parliament said that she was more concerned by the Irish government's decision to allow the US military to use facilities such as Shannon Airport as a transit point for its global operations.

"I'm not worried about the Russians spying on us in Dublin or anywhere else. I'm much more worried about what the Americans are doing in Ireland, and that's by them using our neutral airport day in, day out, going to theaters of war in the Middle East and beyond. I'm more concerned about that. So what the Russian embassy do in their premises, I'm not bothered with that at all", she said.

The Russian Ministry of Foreign Affairs issued a statement on Wednesday denying the rumors, saying that the ongoing reconstruction works at the embassy in Dublin had been planned for several years and were being conducted transparently with the consent of the Irish government.