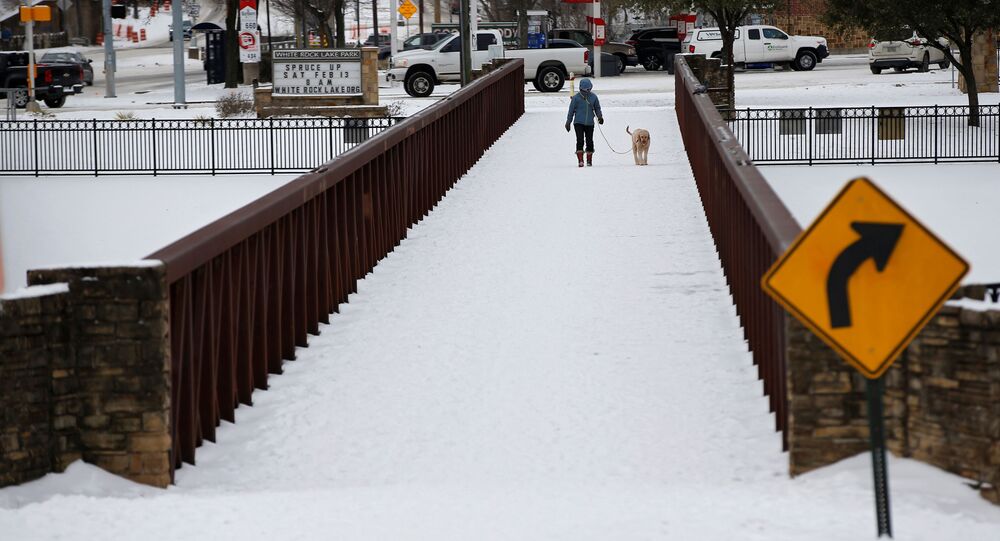 As of this article's publication, more than 333,000 Texas households are without power and more than 100,000 homes in both Mississippi and Louisiana are experiencing blackouts amid the deadly winter storm system.

Meredith Angwin, a 30-year veteran of the utility industry and author of the book “Shorting the Grid,” told Sputnik News Wednesday that while the "immediate cause of the outage was the terrible weather that Texas is experiencing," the ongoing snowstorms are exposing a bigger issue with the state's preparedness.

"The deeper causes, in my opinion, is that the electricity in the state of Texas is overly reliant on wind energy (which is not always available) and natural gas to back up the wind energy," she asserted.

Because the pipes are not designed to withstand extremely cold temperatures, they are prone to freeze, "bringing natural gas power plants offline."

"Some of our wind turbines also iced up and had to be taken offline, but that was a lesser problem. In the end, we were without 1/3 of our thermal power plant fleet," University of Texas at Austin Ph.D. Research Associate Joshua Rhodes explained to Sputnik News.

"We do plan for winter, but this is by far the most wind-spread and coldest weather that we have received in modern memory, so far beyond what we’d expect," he added.

"Certainly, the large fraction of wind energy in Texas, and the unstable grid built to get the erratic wind power to customers was a major part of the problem," said Happer, who served on the US National Security Council during former US President Donald Trump's term.

At the same time, Rhodes claimed only "about 10%" of the power during Texas' winter peak comes from wind energy.

"While wind output was off by a couple thousand megawatts, our thermal fleet was off by tens of thousands of megawatts," he said. These power cuts will likely last until the weather warms up in a couple of days to reduce demand and allow more gas to flow to our power plant fleet."

The experts' comments come as some Texans impacted by the storm are beginning to recover, and others are still without power and safe water. The Chicago Tribune reports at least 40 deaths have been attributed to the extreme weather system.

With hotels packed, some are still struggling to find proper housing during the ongoing below-freezing temperatures.

Additional storms are expected to pelt parts of the US South, Mid-Atlantic and Northeast with snow and ice.

"We need to do a better job of winterizing our power plant fleet. We can easily handle high demands like this in the summer when we are all using air-conditioning and our grid typically peaks," Rhodes concluded, adding that it would also be wise to explore interconnecting "the Texas grid with other grids in North America."

"Build plants that store fuel on-site, like nuclear and coal, so the grid is not so dependent on unreliable sources!" she urged.