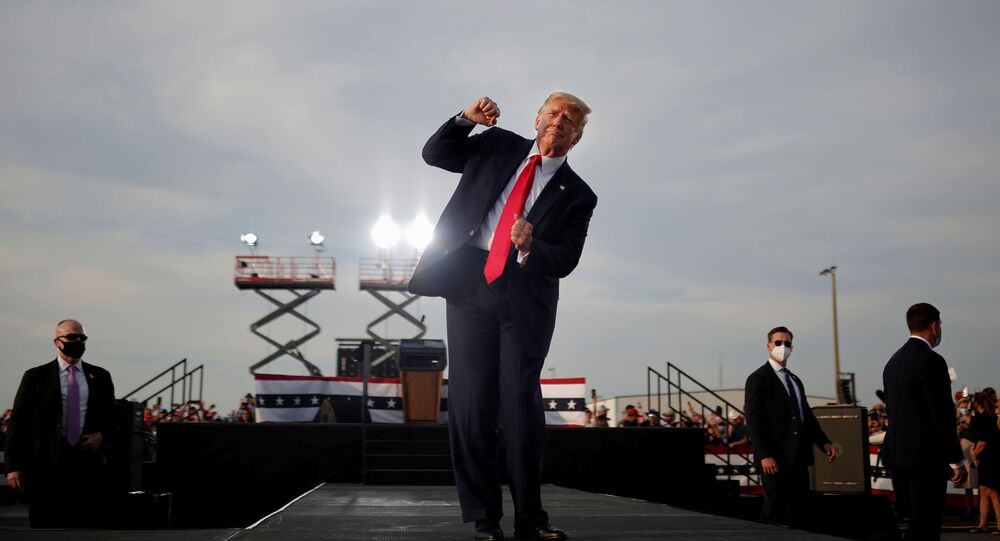 ‘Crazy Like a Fox’: Psychiatrist Says Trump's Charisma as Powerful as JFK's

It has been almost a month since Donald Trump left the Oval Office, but his influence and charisma-driven popularity continues to gain support. Surprisingly, even after he was ostracised from major social media platforms, the former US President remains a major political force in the US.

Sputnik spoke with Dr. Carole Lieberman, a board-certified psychiatrist and best-selling author based in Beverly Hills, California. She explained what gives former US President Donald Trump the edge when he addresses huge crowds of Americans and dealing with criticism.

Sputnik: Throughout his election campaign and tenure, Donald Trump polarised opinion like no other president before him. What's you take on this?

Dr. Carole Lieberman: Donald Trump broke the mould of the US presidency. This, in itself, made some people in Washington, DC feel uncomfortable because they felt off kilter. They didn’t know how to react to someone who was as bold as Trump and were afraid that they wouldn’t be able to get their own self-interests satisfied. Trump is a bull in a china shop and people soon realised that they couldn’t use the same old political strategies to control or outsmart this president.

© REUTERS / TOM BRENNER
Democrats’ Failure to Remove Trump From Political Equation May Cost Them Their Majority in the House
Sputnik: What is the secret behind the Trump personality phenomenon from a psychological point of view? What are his key personality traits that appeal to the people, even since he's left office?

Dr. Carole Lieberman: Trump has always been someone who is driven to win at all costs, whether it’s building a real estate empire, a popular reality TV show, or the presidency. This is very intimidating to some people who are not as driven or not as shrewd. What appeals to people most about Trump is his authentic and burning love of America and desire to make America great again.

Sputnik: Some experts say that a faceless system and function in the form of Biden has replaced the fearless personality who was not afraid to express an opinion. What is the fundamental difference between these two personalities?

Dr. Carole Lieberman: Biden is a shadow of a man. He's Obama’s puppet. Obama is pulling the strings that make Biden dance. Obama put America in danger during his presidency, especially in danger of terrorism. So, it's of grave concern that the Obama-Biden presidency will now put America in danger again. ISIS (Daesh in Arabic, also known as IS/ISIL/Islamic State)* and al-Qaeda* have not stopped planning to destroy America, despite many Americans having been distracted by COVID-19 and politics. Trump kept America safe by reaching out to world leaders and especially by defending America against terrorists – destroying the caliphate and top terrorist leaders.

Sputnik: In December 2016, several American psychiatry professors urged Obama to send Trump for a comprehensive neuropsychiatric evaluation to check for things like self-overestimation, impulsivity, and hypersensitivity to insults and criticism. The strongest claim was Trump's alleged inability to distinguish between fantasy and reality, with many claiming he suffers from malignant narcissism. In your view, did these claims hold a grain of truth?

© AP Photo / Brian Snyder
Hillary Clinton Slams Trump ‘Mindset’ for Claiming Everything is ‘Rigged’ Against Him in 2016 Video
Dr. Carole Lieberman: It disgusted me, as a psychiatrist, to see other mental health professionals hide behind their diplomas to claim to be able to "diagnose" Donald – when they were actually motivated by politics not science! Admittedly, Trump has some narcissistic personality traits, but he's not a malignant narcissist and is in no way unfit for office. The fact that Trump was able to get as many historic accomplishments done during his term, despite half of Congress rallying against him is an amazing feat for anyone - and could not have been done if he were mentally impaired. Trump is "crazy like a fox" – not mentally ill.

Sputnik: In 1964, during the first presidential campaign since the assassination of John F. Kennedy, more than 1,000 psychologists and psychiatrists publicly declared Republican candidate Barry Goldwater not mentally fit enough to be trusted with nuclear access codes. The position of the specialists "helped" Goldwater lose the election to Lyndon Johnson.  We’ve witnessed similar sentiments with regards to Trump, especially in his final days in office, with Nancy Pelosi discussing precautions that could block “an unstable president” from ordering a nuclear strike. What were these claims based on? How were these statements perceived by ordinary Americans?

Dr. Carole Lieberman: Nancy Pelosi and friends are the ones who are unstable. When Nancy Pelosi ripped up Trump’s brilliant State of the Union speech, it was a preview of the hysteria that was to come. Nancy and friends are furious and jealous of Trump’s popularity, especially since he was a Washington outsider and never a politician before. Trump stood in their way for four years and they didn’t want him to be in office one more day. America is divided more or less in half, though few thought there was really any risk of Trump ordering a nuclear strike.

© REUTERS / LEAH MILLIS
U.S. House Speaker Nancy Pelosi (D-CA) shows the article of impeachment against U.S. President Donald Trump after signing it in an engrossment ceremony, at the U.S. Capitol in Washington January 13, 2021.

Sputnik: The subjective nature of psychiatric diagnoses introduces potential political biases among clinicians who might be asked to evaluate a president. Who and how can conclude that a president is mentally unfit for office?

Dr. Carole Lieberman: Determining that a president is mentally unfit is a tricky business, unless the president has obvious symptoms that psychiatrists would have to agree upon. But, choosing a group of psychiatrists to do this would have to entail examining their political beliefs and making sure that there was an equal number of Democrats and Republicans. This may well be an issue with Biden. Though people who voted for him wouldn’t admit it, Biden definitely has signs of encroaching dementia. These will become worse during his presidency and there may, in fact, have to be a determination that he is unfit for office, unless he resigns beforehand.

Sputnik: What historical leader would you compare Trump to in terms of personality traits?

Dr. Carole Lieberman: In terms of personality – not politics – Trump has the same powerful charisma as John F. Kennedy.