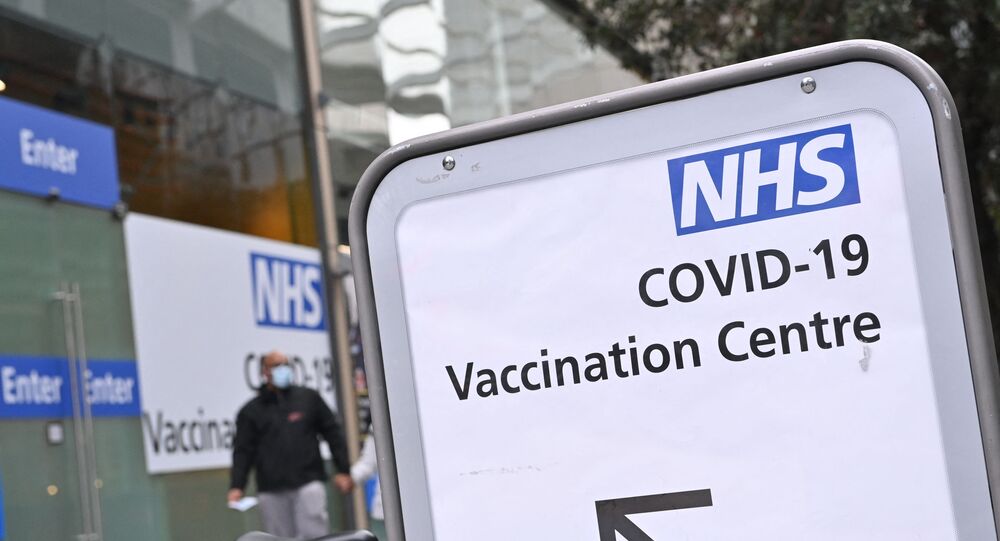 UK Health Secretary Matt Hancock has announced a shake-up of the NHS in England that he says is based on lessons learnt from COVID-19 and will cut red tape.

The Tory government's decision to reform the NHS by rolling back changes introduced when David Cameron was prime minister in 2012, has come under fire from the British Medical Association, which slammed the timing of the move, suggesting it might hinder the fight against the COVID-19 pandemic.

Under Health Secretary Matt Hancock's plan, the NHS in England will centralise power in ministerial hands, as he pointed out that the coronavirus has highlighted the need for the NHS to be reorganised.

The upcoming bill also envisages scrapping the need for local NHS bodies to put contracts for services out to tender, which has been decried by health service leaders as a waste of time, effort and money. According to them, private firms undercut NHS care providers to win business.

© AP Photo / Stefan Rousseau
A private contractor walks down a ward at the ExCel centre which has temporarily been transformed into the NHS Nightingale hospital, in London, Monday, March 30, 2020. The makeshift hospital comprises of two wards with the capacity to hold up to 2,000 people in each

Professor John Ashton was formerly regional director of public health for the North-West of England and president of the UK Faculty of Public Health. He has written a new book, "Blinded By Corona, How The Pandemic Ruined Britain’s Health And Wealth" and is now the Public Health Adviser to the Crown Prince of Bahrain's COVID Task Force.

Professor Ashton explains why the idea of reforming the NHS amid an ongoing pandemic is "not a good idea" and what Boris Johnson's government should do is to tackle the biggest issues and challenges within the health service.

Sputnik: In your view, does the NHS need a comprehensive “shake-up”?

Professor John Ashton: The problem we have in the UK is that reorganising the National Health Service is a kind of obsession with politicians, that they do this at very regular intervals as structural change, as a substitute for evolving things and getting things right. It's a real problem. I was working in public health in England for over 40 years and in my time as regional director of public health - I did that job for 13 years - we had seven reorganisations, seven structural organisations. Each time you do this, the most senior people tend to go away. They take early retirement, they get paid off, they get nice financial settlements, and then they go and get a job somewhere else. There is a loss of organisational memory and it usually takes one or two years for everything to settle down again. So it really is not the right thing to do.

It's better to evolve the changes that you wish to see and then tidy them up with legislation later on. So this current proposal, whose details are not clear yet, is saying some things which seem quite contradictory, because what we've seen during the COVID crisis, the pandemic, has been the failure to manage the pandemic set by centralisation, by trying to do this from London, instead of trying to do it at the local level, through local town halls and at the regional level, which is where people understand their communities much better, and where they have the networks to make things happen and where the local directors of public health, if they've been doing their job well, will be trusted by the local public and will do the things that are being asked of them. I know, because I've worked closely with Russian cities in the World Health Organisation Healthy Cities project that you have very strong identities with your city and town halls as well.

And I can imagine that this is a similar situation that if you really want to make a difference, the place to do that is in each town and city and regional level, not trying to impose everything from Moscow. And that's been the problem in England is trying to do it from London. So the proposals that we seem to have are about centralising more when the centralisation has failed. What's also been leaked is that they want to stop all of the privatisation in the sense of having competing bids for contracts with the National Health Service.

But actually, I just don't believe that. We've had 30 years of the Conservative governments and Labour governments who've been seduced by the idea that by involving the private sector, you can do things cheaper and you can innovate and do things differently, better by doing that.

I think if the pandemic has taught us anything, again, it's that using the private sector for testing and tracing for COVID has been a big failure and it’s cost many billions of pounds when actually putting that same resource into the local level with testing run directly by the National Health Service and the town halls working together has been much more effective. So, I think we're waiting for the details of these proposals. But at the moment it seems like a very mixed bag, quite a lot of contradictions. And I'm afraid if we embark now on a new round of reorganization while we're still in the pandemic - this is not a good thing to do.

Sputnik: Is it the right time for such reorganisation?

Professor John Ashton: You don't change horses in midstream. It is not a good idea to have fundamental structural change when we're only halfway through this pandemic. There's a long way to go yet. This virus is very clever. It's a very simple life form, but it can change, it can mutate.

We think we're doing well with a vaccination programme at the moment, but we don't know what's going to happen next. I think the time to look at structures, to look at changes is afterwards. When we're doing the post-mortem, we're learning the lessons, and we look at what's the best thing to do to make us more resilient in the future.

Sputnik: In 2012 you said that David Cameron's healthcare reform, which the current government now seeks to roll back, "will totally dismantle the NHS". Has your forecast been validated?

Professor John Ashton: I think what we've seen since 2012 and then the implementation of the legislation in 2013 and onwards has been a creation of a very complicated situation. We had about 200 National Health Service organisations before 2012. We now have about 500. This was supposed to simplify things and it made things more complex. It will have added management costs. It's caused a great deal of confusion. It's very difficult for people who work in the NHS to understand how it's all supposed to work. And people outside the NHS don't have any idea about how it is now supposed to work.

So, it does need tidying up. It does need sorting out. It needs to restore the regional level, which is now very weak, and it needs to stop trying to do everything from London.

© AP Photo / Alberto Pezzali
UK PM Johnson's Health Care Reform Plan Comes as COVID Exposes Shortcomings of NHS, Academic Says
But I don't think the right way to do that is by adopting a wholesale reorganisation overnight approach, which is what they tend to do. One thing that we do need is a public health act because we haven't had a public health act in the United Kingdom since 1936.

And these weaknesses that have been revealed by the pandemic, include things like all these private care homes for the elderly, which are not in the public sector, and where we have very little control over them, very little legal powers over privately run care homes for the elderly. And that's not good enough because it means that when we've needed to intervene and require care homes to take action to prevent the spread of the virus, we've been on very shaky ground.

That's just one illustration of the things that are missing now from a contemporary public health legislation and framework. And what I would like to see is the government turn to that and look at things like the commercial determinants of health, how the obesity pandemic itself is being fuelled by the irresponsible behaviour of food processing companies and marketing. And let's have a proper legal framework for public health for the future.

Sputnik: What weaknesses in the 2012 reform did the COVID pandemic flesh out?

Sputnik: What exactly should Boris Johnson’s government change to put the NHS back together?

Professor John Ashton: I think what they need to do is stop privatising really, and we don't know whether they are going to stop it or not, there's a much bigger proportion of the National Health Service budget now put out in private contracts. They need to stop doing that. They need to commit to rebuilding a regional level that really is accountable to the local population and to strengthening public health in the town hall and in each of the districts and giving local public health directors back the status that they had in the past where they could really be influential in their own communities and where, for instance, they had the freedom to communicate with the media without having to get it cleared by central political apparatus.