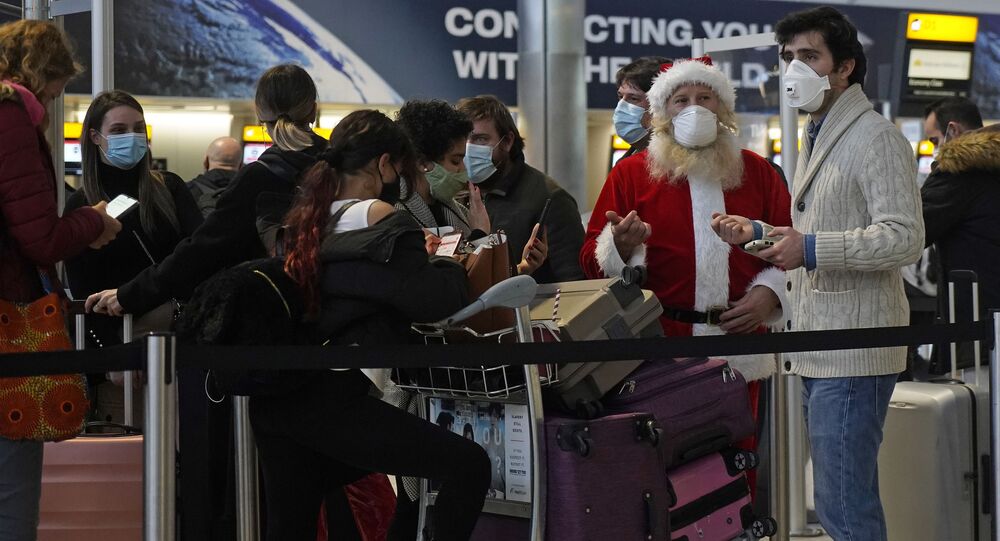 Lawmakers in Britain have defended the newly proposed 10-year prison sentence for citizens caught lying about their recent travel history upon re-entering the UK.

Despite support from ministers, senior figures within the Conservative Party are divided on the law, with the former Attorney General Dominic Grieve calling the punishment ‘draconian’ and ‘completely disproportionate’.

Political commentator Keith Rowe has looked at this story in greater detail.

Sputnik: The government has defended its 10-year prison sentence for those who lie about their travel history, what do you make of this new law? Is it realistic or perhaps too extreme?

Keith Rowe: It does on the first glance appear to be quite extreme to put people who've just lied on a form, having harsher sentences than those who've committed really serious, violent or sexual offences, but I think the message is that it's not about lying on the form. It's about the fact that people who lie on the form are actually a public health risk, which has cost the country many, many 1000s of lives, and many billions of pounds, and I think that somebody who inadvertently thought that they were fine, came into the country and inadvertently lied on a form and then spread a new strain of this virus everywhere, would cost the country dear in terms of the human cost as well as the financial cost. I think that's the message that the government is trying to get out there, and what they're trying to do is use this 10-year sentence as a deterrence. They don't really want to lock anybody up for 10 years, and I doubt that they would in practice do so, but I think they're trying to send a very strong message that you don't mess about with this form.

Sputnik: Okay, looking more broadly, Britain's National Audit Office revealed that the government failed to contact an estimated 375,000 clinically vulnerable citizens who were meant to shield at the start of the pandemic. Keith, do you think we'll see action taken against the government for this preventable failure?

Keith Rowe: I think it's going to be very difficult for anything but the most extreme cases to take action against the government. They've made a superhuman effort to try and contain this virus over the last year with the biggest vaccination programme, huge amounts of money going into research, locking the whole economy down, trying to prevent people from doing things that will spread the virus, and I think that to prove any sort of negligence, which it would have to be against the government when they've taken such extreme measures to try and contain this virus, would be really very difficult to prove in court. Not to say that there might not be one or two people who try, or who are really, really extreme cases, but on the whole, I don't see that happening. If it were to come to any sort of case like that the people who would have the biggest claim, as I would see it, would be the care homes, where the government did allow people who were infected to go from hospital to the care homes, which did lead to it spreading among very vulnerable people. But I think even in those circumstances, I think it would be very difficult to prove that they didn't have everybody's best interests at heart, even if they were medically wrong. I don't really see it being a huge problem for the government at this point.

Sputnik: Okay, have politicians been as accountable as the public would expect from them normally? Is there a problem perhaps with ministers not taking responsibility for their actions and failures over the last 12 months?

Keith Rowe: Just bear in mind what they were faced with at the beginning, they were faced with this epidemic spreading like wildfire, and they didn't really know what would and wouldn't work in terms of containing it. So, all of the measures that they initially put in place were educated guesses. They were common sense guesses to say how can we control this virus led by some science, but they didn't really know the characteristics of this virus. So, there were inevitably going to make mistakes, and they were inevitably going to make some mistakes that trapped people down where they didn't need to be, and other mistakes that allowed the virus to escape where they shouldn't have done. Now, in terms of politician's accountability, I don't think politicians are as accountable as they should be. The problem with a lot of our political system as it is, especially where you have two [or] maybe in Wales and Scotland you could say a three-party system, means that people are voting on such a broad range of issues, and so much on family history, and so much on dislike of one party or another, that in many ways politicians aren't as accountable as they should be. I would think there's a good case to say, politicians should be held to book by their peers, they should have to appear in front of detailed committees and explain themselves, and I don't see any harm, in a democratic system, in having politicians really having to explain their decisions in a detailed way. Every government in the world that's tried to contain this virus have made mistakes and done some things that have probably helped the situation as well. So, I think it's very difficult to pin blame on those measures, which were done with some form of scientific backing, to say let's control this virus.