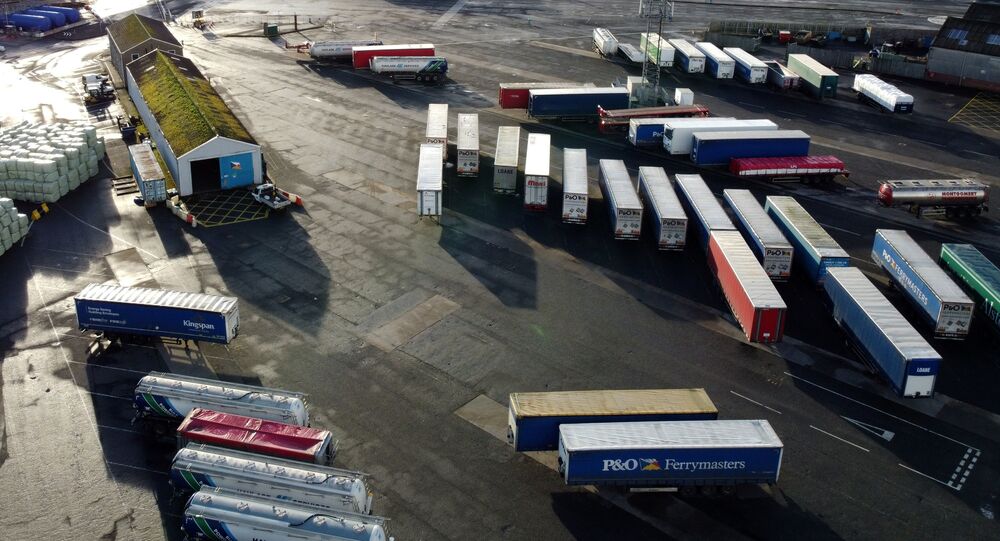 Northern Ireland's Department of Agriculture suspended physical checks on animal food products at the ports of Belfast and Larne on Monday, citing concerns over staff safety. The move came just over a month after the signing of a trade agreement between Britain and the European Union which saw London make major concessions to Brussels.

Observers are divided over whether the security issues at Northern Ireland's newly erected port-based Border Control Posts can be resolved or not, and what these problems mean for the future of the Brexit trade deal between the UK and the EU.

Northern Ireland's Department of Agriculture held consultations with police on Tuesday after withdrawing staff from customs inspection duties at ports a day earlier over the appearance of threatening graffiti and suspicious individuals taking down the license place details of employees of port facilities.

Following the meeting, Assistant Chief Constable Mark McEwan expressed concerns "about signs of tension within the community in recent weeks", saying police are investigating "graffiti at various sites and other forms of intimidation on social media".

The police official stressed that an anonymous tip about possible "paramilitary involvement in threats" has yet to be corroborated, noting that in the meantime, the police presence at Northern Ireland's ports had been beefed up "to reassure staff and the local community".

© REUTERS / PHIL NOBLE
'Menacing' Activity Suspends Physical Brexit Checks at Ports as NI Protocol 'Stokes Tensions'
After 1 January, Northern Ireland remained in the European single market, with regional authorities required to set up Border Control Posts to inspect goods arriving in the region from other parts of the UK, which is no longer part of the single market post-Brexit. The checks have included a long list of new regulations, causing delays in shipping, shortages at supermarkets, and grumblings from the Loyalist community over the terms of the Brexit trade deal's Northern Ireland protocol.

Loyalist leaders, who support Northern Ireland being part of the UK, have warned that the protocol threatens to upset the "delicate community balance" which exists in Northern Ireland between unionists and republicans, with Democratic Unionist Party MP Ian Paisley arguing that the protocol was "bound to end in tears and here we have society's structure falling apart".

"It's all part of a very defective Northern Ireland Protocol in the Brexit agreement, which was always going to be very controversial and difficult", Rodney Atkinson, a British academic and political economist, says of the delicate security situation at the ports.

"It's difficult to know who is more at fault, the European Union, insisting on these sovereignty-destroying regulations, or Boris Johnson for accepting them. But there's no doubt about it that Johnson is in a lot of trouble and so is the Conservative Party, if they make enemies of the Ulster unionists, which it looks like they're certainly doing", Atkinson fears.

Cabinet Office Secretary Michael Gove offered a frank admission Tuesday that the problems faced by British businesses shipping goods to and from Northern Ireland due to the complicated new customs and health regulations are not just "teething problems", as earlier characterised by Johnson, but "significant" issues "which bear on the lives of people in Northern Ireland" and require urgent attention.

© AP Photo / Jonathan Brady
Michael Gove Admits Britain-Northern Ireland Trade Issues Are Not Just 'Teething Problems'
According to Atkinson, it's up to the EU to "change its attitude" and ease freedom of movement between Northern Ireland and the rest of the UK. "It's because of the European Union that there is a problem…Britain does not want any border of any sort. But the European Union does, because it's part of its protectionist economy controlling system of the single market", he suggests.

Dr Keith Breen, a senior lecturer at the political science department at Queen's University Belfast, believes "widespread violence is very unlikely" over the border inspection situation, but fears attacks on port border control staff are possible, given current tensions, unless the government take steps to rein in those forces making the threats.

Sinister graffiti which appeared in parts of Northern Ireland over the EU's triggering of Article 16 and the NI protocol.

No paramilitary grouping has as yet been identified as having been responsible for the reported threats against Belfast and Larne Port workers. pic.twitter.com/OapiJgxemr

"The security ramifications are not very significant, in my view. However, if the suspension of border controls in Larne and Belfast is left to continue by the Northern Irish and UK political authorities, the political ramifications would be damaging. Basically, these authorities would be letting paramilitary groups dictate trade policy in Northern Irish ports. No government can or should tolerate such [a state of affairs]", Breen stresses.

For starters, the professor urges UK authorities to increase port security and protection for border agency staff. Secondly, he suggests, the government needs to "remind the paramilitaries involved of the state's coercive power".

Breen believes London, Dublin, and Brussels have a "shared vested interest" in making the Northern Irish protocol work properly. In light of this, he says, the current tensions are merely a "glitch in that process".

The Northern Ireland protocol was one of the most contentious and controversial elements of the Brexit trade deal hammered out between Brussels and the Johnson government late last year. London effectively conceded to treating the Irish Sea as the de facto customs border due to the looming possibility of a no-deal Brexit, which threatened to cause significant damage to the UK economy through new tariffs, loss of fishing rights, and problems across a broad range of areas of UK-European cooperation.