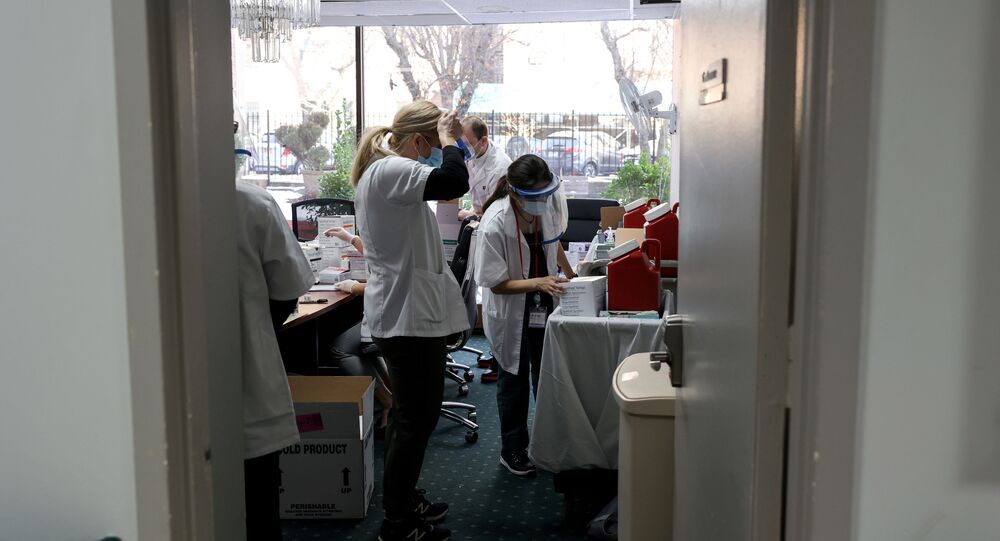 'American Exceptionalism' is Why the US Has Been So Bad at Fighting COVID, Professor Says

US Chief Medical Advisor Dr Anthony Fauci said earlier this week that the coronavirus pandemic in the country could continue for another year due to new mutant strains of the virus that may potentially undermine vaccination efforts.

Steve Keen, a UK-based professor of economy, has shared his thoughts on Fauci's forecast and also reflected on which countries have the best chance of recovering economically in the wake of the pandemic.

Sputnik: If the COVID-19 pandemic lasts another year, how severe will its global economic impact be?

Steve Keen: I think it will divide the world into two segments, the countries that have successfully suppressed СOVID and those that haven't, and the ones that have successfully suppressed СOVID will do very well with the exception, of course, they can't rely on tourism from the countries that have done very badly. This fundamentally means that China and the Asia Pacific region will be able to function as they did in pre-СOVID times, whereas Europe and America will be unable to have any sense of normal commerce. We're likely to see substantial growth and recovery in the Asia-Pacific region, including China, and a continued decline of the output and political cohesion in Europe and America.

Steve Keen is widely regarded as the first economists to coherently warn the world of the coming Global Financial Crisis, and later won the inaugural Revere Award for Economics for his foresight.

Sputnik: How can national economies prepare for such a scenario?

Steve Keen: Well it shows we've made a huge mistake in focusing on efficiency rather than resilience. All this stuff about getting things done efficiently means that you're fine-tuned for the current circumstances and you're not capable of coping if those circumstances change. So efficiency on its own is fragile. And this is exactly what we've done by focusing upon our austerity campaigns and using the taxpayer's dollar efficiently has meant not making any provisions for things going wrong. And you can see that countries which are obsessed about that, the UK in particular, have had a disastrous outcome with COVID and any money they supposedly saved by austerity has been wasted dramatically by having to respond to not having systems in place to cope with sudden disturbances like the pandemic. I'll give one example there. I know from academic context that cross of the pandemic, the government asked the same group of experts how many masks should be set aside for its population. The answer they were given was about a billion masks. Now the politicians said that was too many, so they suggested 50 million, and within one week the UK no longer had enough masks for it population. And that shows what happens when you focus on efficiency rather than resilience. So you have to have public service systems like hospitals with large amounts of excess capacity as well as a forewarning. You're wasting them 99 percent of the time, and the one percent who do need them, you need them desperately.

Sputnik: Which countries will be hit the hardest if the pandemic lasts another full year? What can be done on an international level to support them?

Steve Keen: America. And that's the problem because people normally think America will, you know, come to the rescue of other countries. Whether it rescues or invades is another question. But I think America is going to need instructions about how to tackle something like COVID from the countries that have done it successfully. I would suggest that Joe Biden invites the prime minister of New Zealand to come across to America and explain how New Zealand did it, because that's probably the politically the closest system to America, albeit more democratic than America's government system, and equally with an individualistic social focus. So America needs advice from New Zealand.

© AP Photo / Mary Altaffer
The tents used to test for COVID-19 at Elmhurst Hospital Center are seen, Sunday, March 29, 2020, in the Queens borough of New York

Sputnik: You have just mentioned that people normally think of America as coming to the rescue of other countries, but will countries actually come to its rescue amid a pandemic?

Steve Keen: It's very hard for America to be helped by anybody else because of their belief in American exceptionalism, which is one reason why they've been so exceptionally bad this time around. They should be paying Chinese doctors and nurses to fly over and assist with American hospitals, which are overwhelmed. So we do have countries around the world that have successfully suppressed СOVID. They don't need to hang on to the resources for that anymore. There can easily be an international transfer where doctors, nurses, and engineers who have worked against COVID successfully in China, Thailand, Australia, Taiwan, New Zealand go across to America and bring the cost resources, of course, which America would have to pay for.

Sputnik: What opportunities does the current economic crisis open up, if any?

Steve Keen: Well, I think I think it points out to the rest of the world that individualistic societies fail in the face of pandemics and other things like climate change. So you need to have a sense of collective behaviour, whether that's a top-down government, or whether it's a government like New Zealand where people have a shared sense of identity, which America obviously does not have. So it's a sign that we need to have a political system that includes everybody in a way that America has successfully destroyed. But, you know, Democrat versus Republican nonsense and all that sort of thing. So your sense of unity, social unity, which America doesn't have, is vital. And we also need to focus upon having as fair resources, not having. Forget the economic obsession with efficiency, stop worrying about resilience. And that means having, you know, extra resources available, pressure pushing as hard as possible to reduce the damage we're doing to the climate. That's vital in that sense. It is definitely an environmental process.

Sputnik: How long will it take for the global economy to recover after the end of the pandemic?

Steve Keen: I would say about two years. I don't think we'll ever see terrorism come back to the level it was beforehand. So international travel never recovered from what it was like before it.