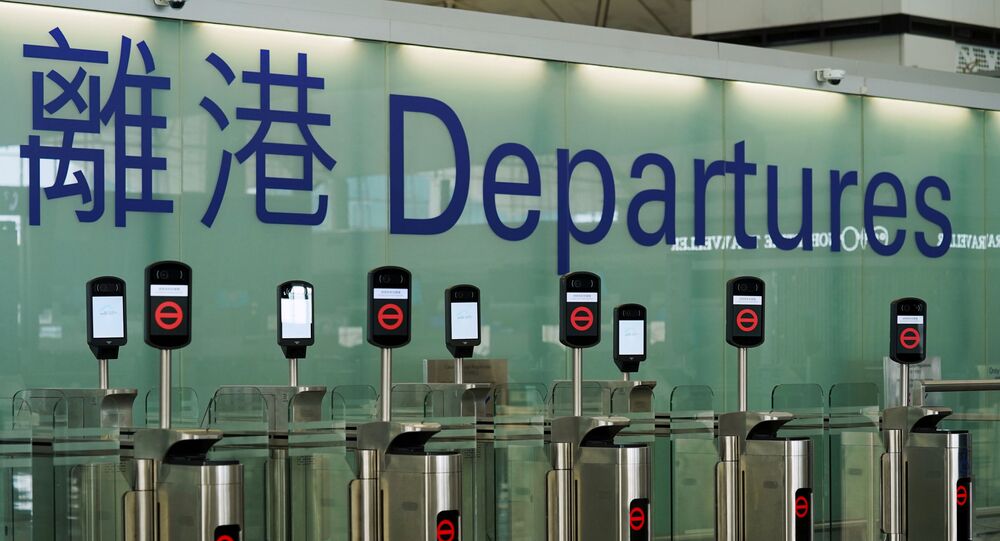 Earlier this week, China announced that starting 31 January it will no longer recognise the passports of British national overseas citizens. This came shortly after the UK launched its scheme to grant citizenship to up to 3 million of Hong Kong’s residents, citing concerns over Beijing's introduction of a National Security Law.

Andrew Leung, former senior Hong Kong government official and independent China strategist, reflects on the UK's plan to grant citizenship to British National Overseas passport holders and explains why not all of Hongkongers will be able to move to the UK.

Sputnik: The UK government expects at least 123,000 Hong Kong residents to move to the UK in the first year of the new visa regime. Who will these individuals be? (What kind of social and economic background will they have?)

Andrew Leung: Under the UK plan, the BNO passport arrangement would be extended to Hongkongers who can move to the UK and live on their own - without reliance on social benefits or other benefits from the UK government - for up to five years. Then they will be able to get a job - if they are offered one. In other words, they would be able to stand on their own. This means that those people must have some means of keeping themselves afloat. First, they have to find some somewhere to live. They have to pay rent. They have to provide for their food and lodging. For those who are bringing the children over, they have to pay for their education. They cannot rely on any subsidy by the government. By definition, people going there will be relatively well off. A lot of people own their flats in Hong Kong. They could sell them. Hong Kong flats are very expensive. If they sell them, they can keep the money and buy something even better in the UK. That is a possibility. However, not everyone has paid off the mortgage and not everybody’s flats are that expensive. Some people do not have a flat in Hong Kong. The likelihood is that those people would be relatively well off in the beginning. Either they have enough savings on their own to be able to live in the UK for five years - together with the members of the family. Secondly, people who are likely to be well trained and well qualified - university graduates and people who have core professional qualifications. Even then, because the competition in the UK is very keen, especially in this economic climate, there are lots of university graduates in the UK and people with qualifications. This would limit the numbers. I think the estimate of 120000 would not be too far off the mark. But it's unlikely they'd go all at one go - because they need to uplift themselves.

Sputnik: Why will they move after all?

Andrew Leung: The reason why people want to move is that there is a feeling that there is too much political division in Hong Kong. People are divided into two camps. For the past year or two years, Hong Kong was embroiled in this social turmoil. People wanted to almost overthrow the Hong Kong government, as it were, by trashing the basic law, which is Hong Kong's constitution, by demanding something which is not in Hong Kong's constitution. For example, allowing people to vote freely for the chief executive without the candidates being screened. Under Hong Kong's basic law, which is Hong Kong's constitution, which is derived from the joint declaration with Britain, Hong Kong has enjoyed a high degree of autonomy for 23 years. Hong Kong has been voted one of the freest cities in the world for 23 years. Even though it's not in a joint declaration, not in a joint declaration with Britain, Beijing chose right from the start to include a clause in the basic law which allow Hong Kong people to choose a chief executive - one man, one vote. But with a very, very important proviso - the candidates must be pre-screened because Beijing doesn't want to end up with someone whom they can't work with.

Then the Democrats in Hong Kong wanted to throw that proviso away and then managed to stir up a lot of protests demanding something which Beijing can't give. Combined with a lot of social problems, for example, a very expensive housing, perception that upward mobility is getting more and more difficult for young people. That all translates into an explosion of protest. Before, Hong Kong was quite separated from the mainland. But after the handover, you can't do that anymore because there's a free flow of capital, people, ideas, money, and then the perception that Hong Kong's identity has been eroded by people from the mainland. Then the tourists, the first group of tourists that came to Hong Kong many years ago, they have all graduated to Paris, to New York, to Switzerland. Then the latest comers are from the villages and then they come to Hong Kong. It's the first time they have left the mainland. The Hong Kong people are very upset about all of it. Going back to the passport - the joint declaration clearly states that the BNO is a travel document. That was the understanding and the letter of the law when the joint declaration was signed between China and Britain. Now, Britain appears to be eating its words by allowing the BNO to become an entree to a full passport in the U.K. Beijing sees that this is a direct abrogation of the promises in the joint declaration. Hence, Beijing's response - by not recognising the BNO as a travel document anymore.

Sputnik: Why does the UK need such a policy?

Andrew Leung: There are two reasons. The UK wants to be in sync with the United States, with the West, with the European Union - seeing that China's increasing clamping down on what they regard as democracy. Even Hong Kong has been enjoying a high degree of freedom, but that the demand for one man, one vote - is regarded to be sacrosanct without paying attention to the fact that this is something which is against the basic law. What they're demanding is the election without pre-screening of candidates, whereas in fact it was Beijing's initiative to include this possibility in the basic law. The West seems to be turning the whole thing on his head, saying that the enactment of the national security law, which, of course, the outcome of all these protests is a violation of Hong Kong's human rights. With the whole world, the West push back and China led by the United States - the UK wants to be on the same page. Point number two, after Brexit, a lot of the European Union citizens are leaving the UK and going back to their own countries because of the various restrictions after Brexit.

The arrival of Hong Kong people who are well-off and well trained would be an advantage to the UK. I think that the UK sees that as an advantage.

As far as the relationship, diplomatic relationship with China is concerned, of course, that the relationship between these two countries is going up and down, depending on the situation. Don't forget that when China first invented the Asian Infrastructure Investment Bank, the AAIB, the United States was set against it. But the United Kingdom was one of the first European countries that joined the AAIB. It's not as if the UK is always on the same page with the United States. On the other hand, now, on questions of democracy and human rights, the UK obviously wants to be on the same page. After Brexit, the UK may need to conclude or may wish to conclude a free trade agreement with China, with other countries as well. Of course, China being the second-largest economy in the world. I don't think that the relationship between the UK and China is dead in the water. It's not always just black and white.