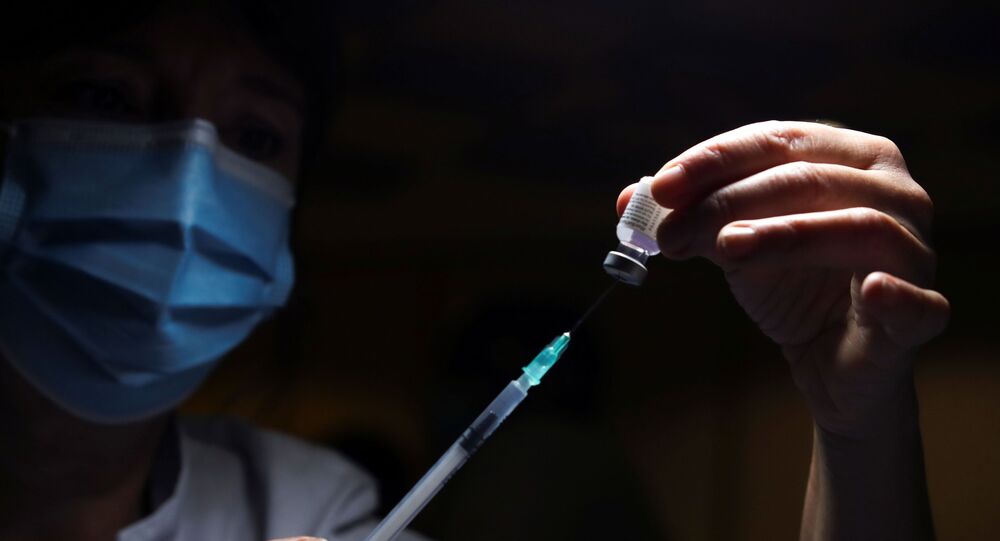 EU is 'Lumbering Beast' Whose Slow Vaccine Roll-Out is Their Own Fault, Analyst Says

The UK and the EU may need a vaccine to cure their relationship after Brussels threatened to block supplies of vaccines entering Britain by using all legal means necessary.

The vaccination war with the bloc was ignited after AstraZeneca guaranteed vital supplies to the UK, whilst delaying deliveries to the EU as a result of production problems. The EU has blasted AstraZeneca and demanded that Britain hand over supplies of its vaccines to help aid the bloc's fight against the pandemic or face consequences.

The Brexit breakup has left Brussels bitter and Sputnik has spoken with former UKIP leader and founder as well as CEO of the British Political Action Conference Henry Bolton to hear his thoughts on the escalating vaccine war and what it means for UK-EU relations.

Sputnik: What are your thoughts on the threats from the EU to block vaccine supplies coming into Britain?

Henry Bolton: There's a moral responsibility to help people, but the first instance, a government's responsibility is to its own people. And we could if we vaccinated, let's say, 10% of the population in every country in Europe, and I'm saying Europe, rather than the European Union, then that would still leave 90% unprotected. It is surely a lot better to protect a community and then move on to the next community if it has not been able to help itself yet. So I would certainly imagine a situation whereby the UK has vaccinated 70-80% of the population, and then is in a position to assist the European Union if it still wants it. But we've got to look at partly why this has occurred. The European Union is making a big song and dance about it, but they are rather covering up for a flaw in their own structures and procedures. The fact is, there's a new vaccine, by the way, that some people may have heard of, it's called Novavax, and this is going to be produced in the UK.

But the UK has already procured 60 million doses of it. Whereas the European Union has only just concluded exploratory talks with the manufacturer. The European Union is in effect three months behind the UK in approving these vaccines, and in signing contracts. So it's only to be expected that the European Union is going to be three months behind the UK in terms of its vaccination programmes. And it is no good - Brussels, pointing the finger at the UK and saying you need to give us some of your vaccine, when in fact, it's their fault that they are so slow and lumbering that they can't get it so quickly. And I'm sorry, but this is why we left the European Union; if they want to sort these things out in future, they need to sort out their own processes.

Sputnik: Is the EU's botched rollout of the vaccine evidence that the UK was right to break from the block?

Henry Bolton: Leaving the European Union has a whole range of different effects, not just in health care and COVID vaccine. But essentially, yes, it does two things. Firstly, it illustrates that the European Union, in some things, is a lumbering beast. Now in terms of healthcare, every nation, every member state of the European Union has its own health care organisation and committees. And most of them have got COVID and vaccination committees. And then there is the European Medicines Agency as well and the European Commission.  Now for them to all coordinate, and for the European Medicines Agency and the European Commission to take account of all the different 27 member states and their concerns, their interests, takes time. So in a crisis management situation, such as we're in now, with COVID, it is not responsive enough, it doesn't serve the population of its countries well enough. And so in that respect, we were right to leave. But you know, there is another reason why this illustrates the benefits of leaving.

Alexander Stubb, the former prime minister of Finland, said this morning that the problem for the European Union is that its member states blame it for everything that goes wrong, whilst the member states' governments take credit for everything that goes well. In other words, a government in a member state - and it was the same in the UK before we left - takes all the credit for the good things and passes the buck on the bad things. This fundamentally undermines democracy. And now we've got the former Finnish president, who is very much a Europhile, saying that this is a problem for the European Union. It is and it creates a big vacuum in democracy if people don't understand who is to blame for getting things wrong, and who is to take the credit for getting them right.

Sputnik: What does this all mean for the relationship between the EU and the UK? After the bitter Brexit breakup, was the deterioration of relations always to be expected?

Henry Bolton: Yes, I always predicted that following the day that we end the transition period, there would be a drop in mutual respect, shall we say, and friendship. But I always also predicted that with time that would grow back. Because, of course for the member states of the European Union, for the European Commission, and people in the UK, the Remain camp in the UK, it's a highly emotive thing; it's emotional. There are people who believe absolutely in the European project, and they are hurt and upset that the UK has left. And every single illustration that shows that we were right to leave will upset them even more.

So of course, there is going to be some negative effect on the relationship, but over time, people will get over that and we will move on.

For example, if the UK is able, or if it's needed, at some point in the near or medium term future to provide vaccines to support the European Union, then that will start to build bridges. Now it is tense.