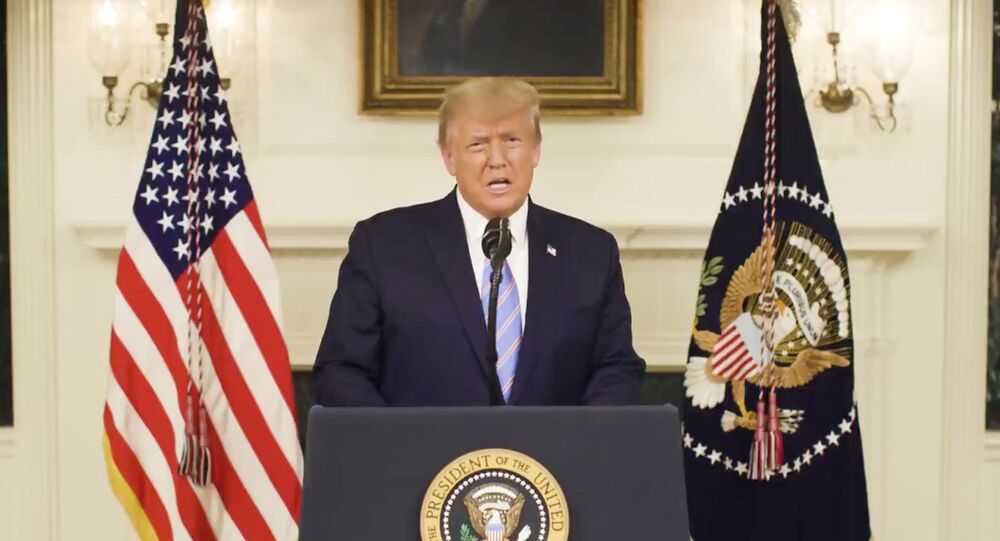 The inauguration of the 46th President of the United States more closely resembled a military operation than a ceremony as 25,000 national guards lined the streets of Washington DC.

There were however no explosive mass protests and, in the end, the only fireworks came from Katie Perry and Hollywood's liberal elite as they celebrated the beginning of Joe Biden’s presidency.

Biden spoke of unity as he addressed a nation which has been divided by an ‘uncivil war’, but immediately afterwards risked the wrath of 74 million Trump voters by undoing some of the former president’s key policies that have benefited America.

Sputnik spoke with James Dalton, Party Secretary of 5 Star Direct Democracy to hear his views on the official inauguration of Joe Biden and whether he thinks the new president will be able appease those who voted for Trump.

Sputnik: So what was your initial reaction to Joe Biden being inaugurated as President of the United States?

Dalton: It was a rather strange affair. And the body language was so down and the people who were in attendance, Amy Klobuchar was the MC if you will. They had a couple of obviously big, big money stars hired to do a couple of songs. But I was rather bemused by it all - what was more reminiscent of a military junta having a celebration than a democratic society. It was strange.

Sputnik: Biden used his inauguration speech to preach unity. But will he be able to appease 74 million Donald Trump voters as well as progressives in his own party?

Dalton: I didn't hear him preaching unity - I heard him reading from a script. There's been nothing unifying about anything in the United States from the Democrat side of the aisle for five years. In fact, I can't recall hearing any positive or constructive statements about any issue of policy for five years.

© REUTERS / Marco Bello
'It Was Generous': Biden to Keep Mum on Details of Trump's Letter Until He Speaks With Him

They've had their street thugs rioting in Minnesota, in Portland, in Kenosha, in Washington DC... They've been burning cities, they've been literally burning down police stations even yesterday they were at it again in Portland, and they smashed up the Democrat Party headquarters. You wouldn't believe it, first day of his presidency. I mean, the words were coming out of the mouth but it's like a lot of politicians, you're listening to a script that just doesn't fit with facts; about 74, 75 million people went out and voted for the other guy in this election, Donald Trump, and he's got huge support and the Democrats in Congress are literally trying to persecute the guy.

I think if they have the opportunity to crucify Donald Trump - now he's a retired man who should be putting his feet up and having a game of golf -  but they literally want to persecute him, drag him through the streets. I don't understand how people can listen to those words. Those really faux, empty words of unity, and really take them with any sincerity.

And that's a real problem for Joe Biden.

Funnily enough, as I was listening to Biden's inauguration speech yesterday, and was thinking this could have been written by most social scientists at A-level, it reminded me of four years earlier, when President Trump had given his inauguration speech, which was jam-packed full of 'This is my programme of events for the next four years'. And he laid out in detail - and whether you liked it or you didn't like it, whether you voted for it, or you didn't vote for it - he laid down in detail what his intentions were, for the United States and for his term of office, very clearly. And it matched up with what he had campaigned on to get elected in 2016. I can't tell you what the Democrats have campaigned on. I didn't hear any offer from them, any policies. I heard that Trump is evil, he needs to be got out of office - not that they ever gave any explanation as to why they thought Trump was evil - just a constant barrage of lies and smears.

Sputnik: How much then has the mainstream media and the Democrats contributed in trying to damage Donald Trump's reputation?

Dalton: Reputations are made or destroyed by the press. Anybody who's absorbed British mainstream media for the past four years, if they hadn't kind of noticed that, it is their job. They are directed to smear, slander, attack Donald Trump, and have been doing so for four years. I think any reasonable person who's listened to the rhetoric and the news output for the past four years understands that.