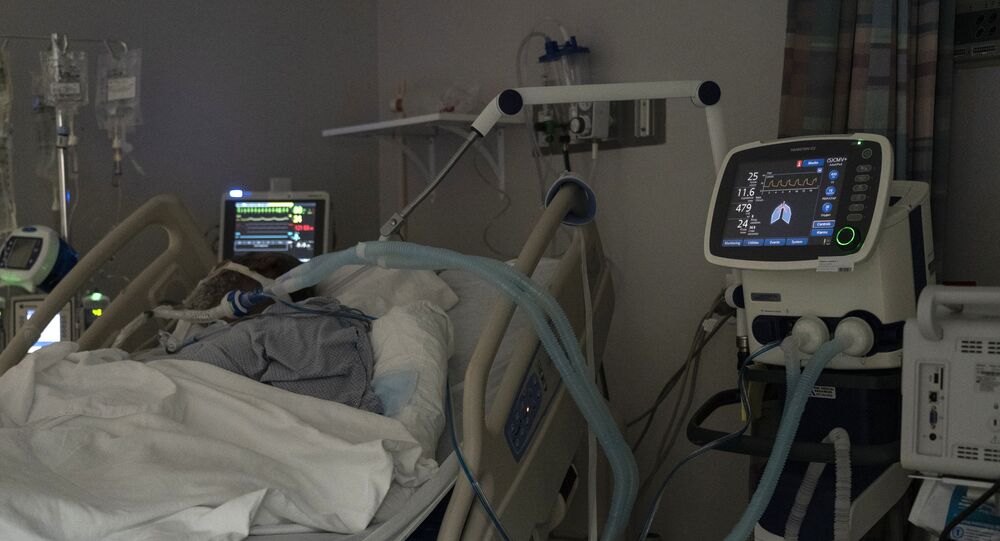 New figures from the Britain’s National Health Service (NHS) have revealed that Covid patients in England are occupying over thirty thousand hospital beds. The announcement comes amid warnings from England's chief medical officer, Chris Whitty, that the NHS faces it’s "most dangerous situation" in living memory.

Looking at the state of the NHS in detail, we spoke to writer and health policy analyst Roy Lilley in this interview.

Sputnik: What do you make of these new NHS figures that over 30,000 hospital beds are currently occupied by Covid patients? What does this mean for the NHS?

Roy: Well it means the NHS is very busy as I think we all realise, but I mean there are more subtle issues at stake as well, because it means that those patients occupying those beds won't be patients that would be normally occupying those beds, and that means people perhaps who have been on what we call elective lists, so that's people who are expecting an operation for a hip or a knee, or maybe a cataract operation, something like that and of course it also causes an enormous amount of concern because the "normal" work of the NHS is carrying on. People are still falling off ladders, they're still getting run over in the street, they're still having heart attacks, they're still having cancer, and so it means that all of the other "normal" work, or "normal" patients in the NHS, are now being squeezed out by the fact that we've got so many COVID patients who are very, very ill indeed and need our hospital beds.

Sputnik: What problems does the sheer demand on NHS resources create for hospital trusts and patients suffering from other illnesses?

Roy: A lot of people have had letters, the most unwelcome letter probably that they could possibly have from the NHS, that says 'Look, we're sorry, Mr. Smith, or Mr. Brown, or Mrs. Smith, your operation that was going to take place on the 23rd of whatever month has been cancelled because we need to bear to the COVID patients'. So, aside from the personal angst that that causes for the individuals, and the knock-on for their families as well, because someone may be having a new knee or a new hip operation; they were going to be looked after at home by families who have perhaps taken time off work and so on... the whole thing cascades right through whole families when you get these things happening, and of course, on top of that, you've got the issue of waiting lists. Now before the first wave of Covid kicked off back in the beginning of last year, it seems such a long time away now, but before then there were about 4 million people on the waiting list in England.

Now, what that is now I don't know, I mean there have been gargantuan efforts in the NHS to try and keep effectively two NHS's going. There's the COVID green NHS, that's where the normal operations are being carried on and they've been trying to ring fence the whole of the operation; so staff only work in one part of the hospital, and operations are only carried out in a certain part of the operation, in COVID red, where they know patients either have COVID, or they're suspected of COVID.

So, they've been trying to run effectively two NHS's and they've done rather well because up until a couple or four/five weeks ago, we'd actually in the English NHS, done more cancer operations than we had done year to date in the previous year. So, they were making some headway but it does mean that waiting times are really going to go through the roof.

Sputnik: What emergency actions could we see from the government to reduce the strain on UK hospitals created by this pandemic?

Roy: This is really difficult, it's all about capacity now. If we just look at how the capacity is being managed at the moment, hospitals have gone through what they call surge capacity, that means that they were probably doubled or even tripled the size of their ITUs, their intensive therapy units, and they'll have done that by moving into medical beds, moving into recovery rooms where there's oxygen, and moving perhaps even into operating theatres themselves, because the key to this is the patients that are in hospital and very poorly, they need oxygen. So, we've used up the capacity in many of our hospitals and those who haven't soon will. After that, they move into what they call mutual aid that means when they put patients around the system. So, instead of you being in the hospital near to you, you'll be shipped off somewhere else which is a nightmare for relatives, but it means there is a bed with the suitable equipment and qualified staff. After that, they go into the private sector, and after that they'll open the so-called Nightingale hospital. So, you can see how the hospitals are filling up the capacity. Now as far as the private sector is concerned, well, there is still some emergency elective procedures being carried out in the private sector but really when push comes to shove, most of the elective stuff will just come to a grinding halt. It's really difficult to see what our way is out of this because there's such an urgent pressure on beds. So, I think what the government will do is as soon as the numbers start to come down, they'll reinstate the COVID red and COVID green hospitals, and try make some hospitals COVID free and carry out elective, and urgently elective procedures in that environment, but it is a nightmare scenario. I mean and the other thing, of course, is there are so many members of staff, off sick either with COVID or having to self-isolate because one, they or their family members have come in to contract with COVID - over 100,000 staff I think it's true to say are in that predicament.