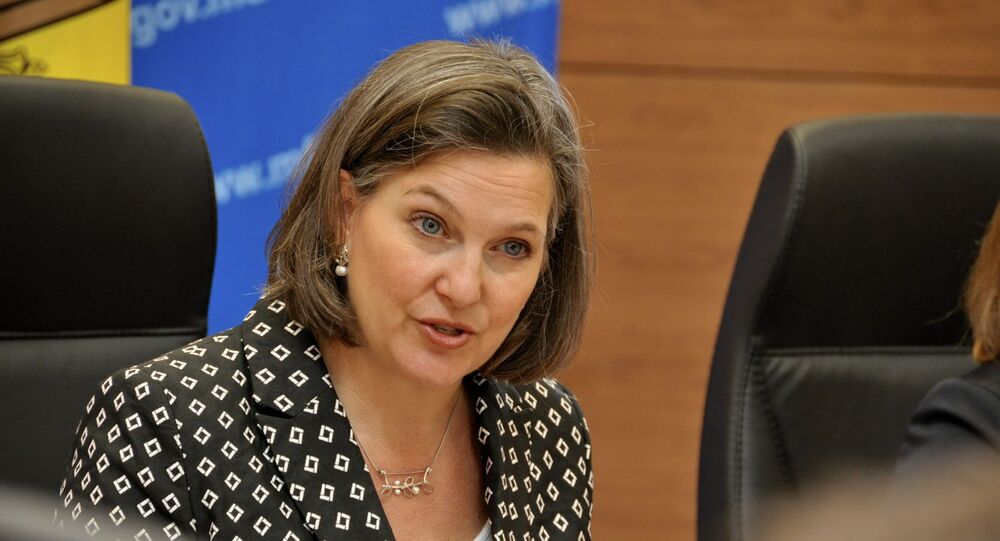 As fears of a New Cold War between the United States and the Russian Federation persist the incoming administration of Joe Biden appears to be signalling that it won't be changing course from the well-travelled path of an aggressive foreign policy, a geo-political documentary filmmaker tells Sputnik.

Victoria Nuland, notorious or her pro-militaristic and interventionist policies, may find herself in yet another US government position helping to shape her country's foreign policy. According to recent news reports, president-elect Joe Biden plans to nominate Nuland to the highly influential position of Under Secretary of State for Political Affairs.

Robbie Martin is co-host of Media Roots Radio and the filmmaker behind the multi-part neocon documentary exposé, A Very Heavy Agenda. The documentary, which examines the re-emergence of US hostility towards Russia post-9/11, also focuses on influential American policy makers such as the Kagan family, which Victoria Nuland married into by way of her husband Robert. Martin warns that her appointment portends a worsening of relations between the US and Russia, as Nuland represents an "extremely hawkish and aggressive wing of the DC foreign policy apparatus".

Sputnik: What can you tell us about Victoria Nuland's background?

Robbie Martin: She's been in the DC policy wonk scene for a very long time, and worked at the US embassy in Moscow when she was very young where she witnessed the fall of the Berlin wall. She met her future husband Robert Kagan as she describes in a 'cold basement' of the US State Department when he was working for the US information agency to spread propaganda against US adversaries. Her first major position was Chief of Staff to Strobe Talbott from 1993-1996 in the Clinton administration and perhaps because of her perceived Russia expertise (she studied Russian literature at Brown university) was elevated to Deputy Director for former Soviet Union affairs at the Department of State, a position she held from 1997-1999.

© AFP 2020 / AUDE VANLATHEM / BELGA
In Nuland's Footsteps: US Names Ex-McCain Staffer as Special Ukraine Envoy
Her most prominent position after this shows the bridge between Clinton-era foreign policy thinking and the Bush-era by being appointed as one of Dick Cheney's primary foreign policy advisors where she worked alongside neocon and former ambassador to Turkey, Eric Edelman (who would later form a sequel to Project for the New American Century with her husband Robert Kagan). It's unclear what Nuland's involvement was but Eric Edelman specifically got outed during his time in Cheney's office as helping cherry pick intelligence for the Iraq war, it's very likely she played a role in that too. We already know her husband, Robert Kagan played a crucial role outside the Bush administration priming the pump of conspiracy theories about Saddam being behind 9/11 and the 2001 anthrax attacks.

Sputnik: Describe the kinds of policies Victoria Nuland has promoted during her previous tenures in government?

Robbie Martin: Her first major public facing role in government was as US ambassador to NATO, where she ushered in a significant ramped up era of NATO that had just brought former Soviet bloc countries Slovakia, Latvia, Slovenia and Romania into the organization in 2004. This would be followed by her former colleague Eric Edelman being in charge of the Poland missile defence shield proposal from the Bush White House in 2007 (that was clearly designed to provoke Russia). This made her somewhat of a de facto Eastern Europe and Russia 'expert' in DC where she made a name for herself at think-tanks like Brookings and the Council on Foreign Relations. She had a minor role of being a State Dept propagandist ('spokesperson') early in the Obama administration, but eventually gets her most consequential appointment, Assistant Secretary of State for European and Eurasian Affairs in the US State Department.

© AFP 2020 / VANO SHLAMOV
Victoria 'F*ck the EU' Nuland Leaves Her Post at the US State Department
This put her in an extremely important 'diplomatic' role that eventually exposed her (via a leaked phone call) playing musical chairs with the opposition Ukrainian government before Viktor Yanukovych was actually removed. In addition to this, Nuland promoted regime change in Libya and in Syria, sending more troops to Iraq to 'fight ISIS'* but has remained relatively mum on Iran. We know, however, that members of her family like Kim Kagan and Fred Kagan are working furiously on Iranian regime change plans at their highly lucrative think-tank, The Institute for the Study of War (ISW). The vice-chairman of the ISW, General Jack Keane is currently a regular advisor to the Trump pentagon.

Sputnik: Does the appointment of Victoria Nuland to Deputy Secretary of State bode well for US-Russian relations moving forward?

Robbie Martin: It's two sided, Russian government officials have the deeply held belief that Victoria Nuland played an instrumental role in the Euromaidan coup in Ukraine, and according to what we know this does appear to be a policy that Obama largely relegated to her and Geoffrey Pyatt (the US ambassador to Ukraine) when Obama had a more aggressive posture towards Putin and Russia. So that being said this alone bodes horribly for US-Russia relations, to put a person in the State Department that Russia already despises almost on the same level they despised [former Republican Senator John] McCain and Hillary Clinton. Optically/symbolically it seems to be sending two messages, a change in posture from the Trump-era, and that the US is ready to take the big knives out on Russia, again.

From the US side, some of the more naïve DC blob wonks are in such a bubble that they probably believe Victoria Nuland understands 'Putin's brain' better than other candidates and that she'll be able to read the tea leaves and make calls better than other available people. This is of course very wrong and a feedback loop construct of DC foreign policy think-tank culture. The reality is that Victoria Nuland represents an extremely hawkish and aggressive wing of the DC foreign policy apparatus that goes back to her first appointment in the Clinton White House working for cold warrior Strobe Talbott. They have been focused on escalating US tensions with Russia for the last 25 years. This group of Clinton-era Russia hawks after sponsoring [former Russian president Boris] Yeltsin never really believed in an autonomous Russia post Cold War. In their eyes they always needed Russia 'on a leash'.

Sputnik: To what extent does the selection of Victoria Nuland reflect the wider foreign policy characteristics of the incoming administration of Joe Biden?

Robbie Martin: My thinking on this is that on the surface this represents a return to the Obama-era foreign policy paradigm. A greater focus on Europe, cyber-war, drones,  'combatting disinformation' on the internet and using proxy forces to mission creep us into potentially full scale wars. Overthrowing [Syrian president Bashar al] Assad will likely be put back on the table, possibly even an attempt to 'reverse' what happened in Crimea will be back in play.

What's scary to me about a Biden administration resurrecting these policies is I don't even see a chance of Biden shying away from hawkish behaviour like Obama very mildly did (backing down from the 'red line' declaration in Syria or refusing to sign into law the $300mil Ukraine weapons bill). Biden always presented himself more as a hawk to the right of Obama, but that is when he still seemed to have his mental faculties intact. Now that Biden appears to have genuine cognitive decline, the possibility of him essentially just being a puppet of the national security team surrounding him is huge. Not that it would be any better to have old school cognitively intact hawk Biden actually running the ship, but it would be a mistake to focus more on him rather than the team that surrounds him, at least at this point.

Victoria Nuland's appointment also more broadly represents [a future] Biden administration plugging back into a specific sector of DC foreign policy think-tank culture, where we are more likely to see Brookings and Institute for the Study of War 'analysts' directly advising the State Department and Pentagon. When Victoria Nuland did a Frontline interview after she left the Obama administration she essentially places the blame directly on the former president for 'allowing' massive amounts of death in Syria and Ukraine. So given these candid reflections of hers it's very clear that she intends to push the envelope yet again and perhaps even harder now, because she no longer will have Obama apparently standing in the way of fully materialising the foreign policy vision she represents.