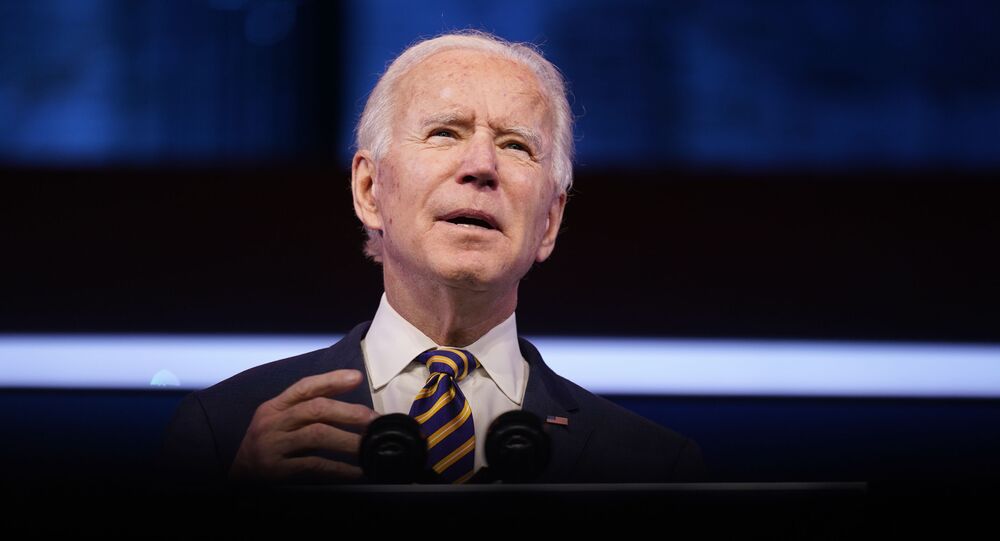 After the Electoral College voted in 14 December, the next stage in the multistep US election system is the Electoral Vote count in Congress that is set to take place on 6 January. But some Republicans are expected to contest Biden's win in swing states which is likely to turn what is usually a largely ceremonial event into a lengthy procedure.

Robert J Hutchinson, who writes on the intersection of politics and ideas, and is the author of many books of popular history, including, most recently, What Really Happened: The Death of Hitler (2020), says that voter fraud might not be "widespread", but it does occur and cannot be ignored by the new administration - otherwise it could undermine its legitimacy.

Sputnik: What do you expect will happen with the counting of the electoral vote on 6 January in Congress?

Robert J Hutchinson: Well, the counting of the electoral votes has been largely a ceremonial exercise. However, more than 100 Republicans in the House and nearly a dozen senators in the Senate have threatened to challenge the certification of some of the electoral votes, in states with disputed results, unless a special government commission is established to investigate claims of voting irregularities during the 2020 election. If at least one Representative and one Senator objects to the vote in writing, then each house of Congress is required by law to debate the merits of the objection for not more than two hours. If the objection fails, as appears almost certain it will, then the counting of the electoral vote proceeds as before. This is what I believe will happen.

Sputnik: Has this happened in the past?

Robert J Hutchinson: Yes, it has. In 2005, two Democrats claimed there were voting irregularities in Ohio and Congress, following the Constitution, met to debate the objections and then went on to certify the re-election of President George W Bush. In 2017, Democrats tried to object orally on the floor of Congress to the electoral vote for Donald Trump, but then-Vice President Joe Biden, functioning in his role as president of the Senate, ruled they were out of order because they had not made their objection in writing, as required by law.

Sputnik: What does this step mean for the transition of power?

Robert J Hutchinson: What the certification of the electoral college vote means for the transition of power is that the many procedural safeguards established in the US Constitution continue to work. The United States is a government of laws, not men, and it is the national commitment to obeying the law that allows for a peaceful transition of power.

Sputnik: What steps can we expect from Donald Trump and his Republican allies to further dispute the results of the elections because there are still Republican politicians loyal to President Trump?

Robert J Hutchinson: I expect that Trump will leave office in a bad mood when Congress certifies the electoral college vote - and his Republican allies will continue to press for a thorough investigation of all claims of voting irregularities and last-minute changes to election procedures, as is their right.

The Democrats and the controlled corporate media claim there is no evidence whatever of voter fraud in the United States, but this is simply false. It may or may not be “widespread” but voting fraud does occur. Last May, the former judge of elections in South Philadelphia pleaded guilty to stuffing ballot boxes for Democrat candidates in 2014, 2015 and 2016. Just a month ago, two Democrat operatives in Los Angeles were charged with submitting more than 8,000 fraudulent voter registration applications during the 2020 election as well as with falsifying names, addresses and signatures. In tight races in which the margin of victory comes down to five, four and even three digits, these isolated local incidents could have a national impact.

Sputnik: What happens if the Democrats do not agree to an investigation?

Robert J Hutchinson: If the Democrats do not agree to an investigation of the 2020 election, then Joe Biden will not be viewed as a legitimate president by nearly half the population. Polls show that fully 40 percent of all Americans, including 16 percent of Democrats, believe the election was rigged in some way. Doubts like that must be resolved or they will undermine the legitimacy of the government.

Sputnik: How will this bipartisan division further deepen and influence the decision-making process under the new administration?

Robert J Hutchinson: With the help of corrupt officials in the FBI and the Department of Justice, who have now been exposed, the Democrats orchestrated a three-year propaganda campaign against Trump that claimed he “colluded” with the Russian government in his election. As the whole world knows, there were endless Congressional investigations, the appointment of a special prosecutor and a full-blown impeachment trial – and finally it was proved that the whole exercise was a fraud, based on lies paid for by Hillary Clinton’s campaign.

As a result, the Democrats are almost certain to get the same treatment, only now they have even less political power because they lost so many Congressional and state legislature seats in the last election. Joe Biden’s son appears to have received millions of dollars in China and the Ukraine solely because his father was the vice-president of the United States. It hasn’t been proved yet how involved Joe Biden himself was, but I expect Congress will be locked in the same kind of gridlock as during the last four years as it investigates Biden’s business dealings.

Sputnik: What will the Republican Party look like in the post-Trump era?

Robert J Hutchinson: Donald Trump was and still is a gigantic “red pill” or wakeup call, for working people in the United States. Because he is not a politician but a businessman, Trump has been able to reveal to ordinary Americans just how much the political class in America – made up of both establishment Republicans and Democrats – is not acting in the interests of the American people but is mostly interested in enriching itself and its friends. This is what he calls the Swamp.

What is really going on in the US right now, as in many countries in Europe, is a massive political realignment. On the one side, there are so-called establishment politicians in various political parties, the ruling class, who stress things like increased immigration, free-trade, global warming and fringe issues such as transgender rights. On the other side there is a new movement of ordinary working people against the Big Tech oligarchs and the outsourcing of jobs and people.

In America, this populist movement has found an institutional home, at least for now, in the Republican Party – and to that degree, the Republican Party will become more of a national populist party going forward and less the party of big corporations. If it does not, it will die. The 70 million flag-waving Americans who voted for Donald Trump are not going to vote for “Democrat Lite” – which is all the establishment Republicans really are, just Democrats with better manners.

America’s working class instinctively knows its interests are more aligned with economic nationalists like Trump than they are with the tech billionaires who control the Democrat Party today. That’s why Trump is hugely popular with working people in America’s heartland, and why the super-rich, Big Tech and the entire corporate media establishment all support the Democrats.

Sputnik: What does this mean for the future of the US?

Robert J Hutchinson: America will be fine. I’m old enough to remember the riots in the Sixties and the far-left terror groups, like the Weather Underground and the Symbionese Liberation Army, that blew up federal buildings and murdered police officers. These would-be communist revolutionaries triggered a massive backlash among ordinary Americans. The country ended up voting for conservative politicians such as Richard Nixon and Ronald Reagan, and we had 30 years of expanding prosperity and relative peace.

Some people claim that things have changed and American kids have been brainwashed by far-left college teachers and the corporate media and so will support socialists such as Bernie Sanders. But I don’t buy it. I know a lot of young people who are huge Trump supporters. Trump is punk rock for some of these kids.

Once in power, Joe Biden and the Democrats will try to push various lunatic policies on the entire country – such as banning "gendered" words such as "father" and "daughter" from government documents – but they will simply be ignored by most of the population.

The Republican Party, still led by Donald Trump and his kids, will probably continue to consolidate its popularity in the heartland, and will win again in the 2022 mid-term elections.

After the fiasco of the 2020 election, Americans will push for significant electoral reforms, such as banning mail-in and "early" voting and voting without government ID - practices that are all illegal in most developed nations and in Europe.

The cultural war that has divided Americans for a generation will continue for the foreseeable future, but Americans will become bored with politics and get on with their life – just as they did in the Eighties, Nineties and Noughties.