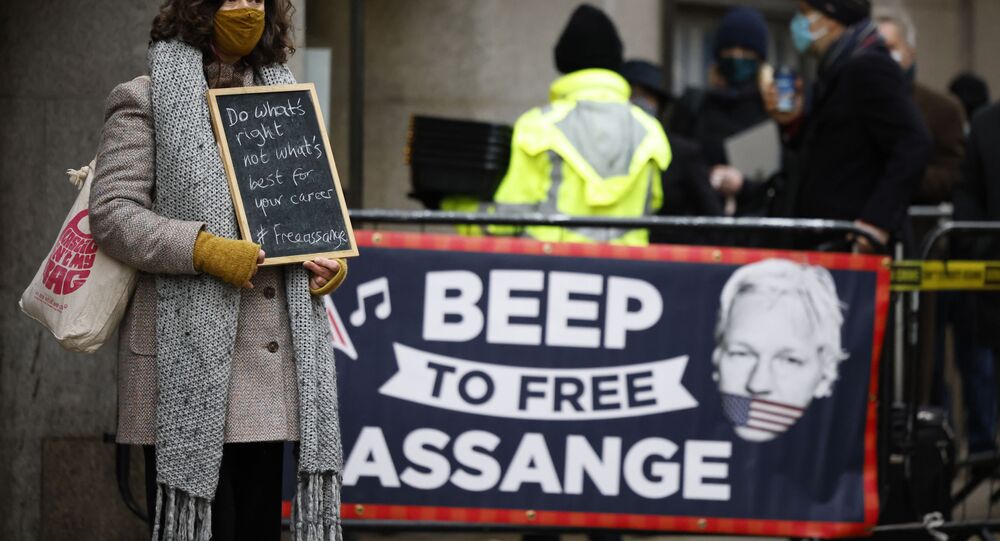 Assange Extradition Ruling Strikes Blow to US, Yet No Victory for Free Press, Experts Say

WASHINGTON (Sputnik) - A UK court decision to prevent Julian Assange from being extradited to the United States is likely to be overturned, although it did show, at least temporarily, that the US' long arm of the law has limits, a former British diplomat and legal experts told Sputnik.

London District Judge Vanessa Baraitser ruled on Monday morning that Assange, publisher of WikiLeaks, was at too high a risk of committing suicide if he was handed over to US authorities. Assange's supporters hailed her decision as crucial in the publisher's two-year struggle to prevent extradition to the United States.

Assange could face up to 175 years in prison if convicted on charges of espionage and computer fraud in a US court.

Analysts cautioned that Baraitser's ruling would likely face appeals from the US government and could still be overturned, delivering Assange to the fate he has feared for so long.

"In basing her ruling on health grounds, and rejecting defense arguments based on rights to free speech, the judge gave comfort to the United States, still able to appeal and still able to threaten whistleblowers with daunting retribution, and struck a chilling blow at defenders of press freedom everywhere", former British ambassador Peter Ford told Sputnik.

Based on the long and sustained efforts by the US government to extradite Assange, the embattled publisher could anticipate no let-up in the campaign against him, even under President-elect Joe Biden, Ford advised.

"It seems unlikely that the US security state, which rumbles on regardless of who is president, will drop its temporarily paused game of cat and mouse with Assange," he said.

University of Illinois Professor of Law Francis Boyle warned that a sophisticated legal structure to ensure the rapid and regular extradition of individuals sought by the US government already existed in the UK.

"I think that the decision's [chances of] overturn on appeal is 50-50. If that occurs, Assange will soon be put on a plane and imprisoned for life in a star chamber proceeding," he said.

There would be virtually no criticism of such an outrageous action across the US political spectrum and mainstream media, Brenner predicted.

"The 'New York Times' [and others] will keep their mouths shut other than write some mealy-mouthed essay about the challenge of balancing national security and press freedoms," he said.

However, Judge Baraitser's decision, despite being reached on the very narrow grounds of concern for Assange's health, was still likely to have far more profound, longer-term implications in the battle to free Western Media from state control, Ford explained.

"The decision reached, however, to resist the demands of the mighty United States, whatever grounds it has been reached on, creates a precedent and a momentum such that it may come to be seen as historic, possibly marking the high water point for Western security states' ability to keep their misdemeanors secret," he said.

The ruling appeared to have caught US authorities by surprise and generated some confusion about their public stance and legal strategies to try and extradite Assange, Ford maintained.

It could prove to be "the point at which they were put on the back foot," he said.

Boyle argued that Baraitser, while fearful of defying the United States on strictly legal grounds, had clearly yielded to the enormous international public outrage and concern over Assange.

"The only reason this judge declined to extradite Assange was the massive international pressure campaign mounted on his behalf against his extradition to the United States," he said.

Former New York Times vice chairman and general counsel James Goodale, author of "Fighting for the Press," added that the narrow health issues the London judge had cited would limit the further legal options that the US government might seek to employ to extradite Assange and open the way for his eventual release.

"I do not think the United States can put more pressure on [the] UK. It’s in the hands of the court. Since Assange will go free probably, that may encourage other whistleblowers," he said.