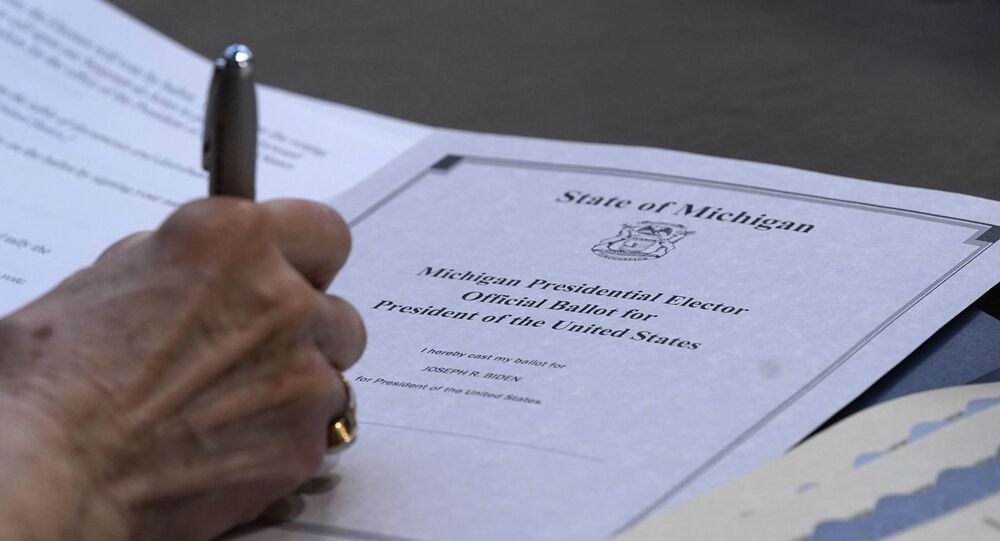 Members of the Electoral College gather on Monday in their respective states to cast official votes for US president in the wake of the 3 November election that was marred by claims of wide-spread voter fraud.

Speaking ahead of the much-anticipated Electoral College vote, Dr Mark Shanahan, an associate professor at the University of Reading, has told Sputnik about his personal expectations from the ballot-casting, potential protests following the vote, and the current Senate elections in Georgia.

Sputnik: Members of the Electoral College will gather on Monday to cast their official votes for president. To what extent can we expect an unforeseeable outcome? Will there be any surprises, or should we expect the projected electoral vote count to be sealed and certified?

Mark Shanahan: I am not expecting any surprises. Despite the pressure that Donald Trump has tried to exert on States, everyone other than the hardest core of Trump faithful expect the Electors to go to State Capitals across the country and for a significant majority of them to cast their electoral College votes for Biden.

© REUTERS / Jonathan Drake
What to Expect as Electoral College ‘Rubber-Stamps’ Results of 2020 US Presidential Election
Sputnik:  How high are the chances that we will see ‘faithless electors’?

Mark Shanahan: There are always a few in every Presidential Election from both sides - that's likely to happen again in 2020, but not to the extent to make any significant difference.

Sputnik: The Michigan House and Senate legislators closed their offices due to threats ahead of the electors' meeting. In your view, how can we expect the reaction to play out on the streets following the Electoral College decision?

Mark Shanahan: Trump has created and fanned the flames of an angry narrative that has brought relatively small numbers of people who believe the election was 'stolen' ever since November 3. Today is symbolic, and I would expect protests particularly in some of the swing states. However, it's cold, the days are short, and the huge majority of Americans have already moved on. I would not expect significant trouble.

Sputnik: Once the electoral votes are cast, they are sent to Congress, where both houses will convene on Jan. 6 for a session presided over by Vice-President Mike Pence. What battle can we expect then, in your view, as we’ve seen reports that some House Republicans plan to challenge the election results on the 6th of January?

Mark Shanahan: One last Hail Mary shot from a few House Republicans who will try to challenge results in a few of the swing states as Congress goes through the vote tallying process. However, given the wight of evidence in support of a fairly-run election with no evidence of widespread fraud, the effort is bound to fail - and may even result in the embarrassment of VP Mike Pence having to declare the election in the Senate for Joe Biden.

Sputnik: There’s also an important issue of the current Senate elections in Georgia, as they will determine the balance of power inside the legislature. In your opinion, can the incumbent Republican legislators keep their seats? How will this shift the bipartisan landscape in both the Senate and House of Representatives and how this will impact the decision-making process of the new administration?

© AP Photo / Julio Cortez
What Would Happen If Electoral College Voters Rebel Against The Official Results On Monday?
Mark Shanahan: A week or two ago I would have said the Democrats had a chance of taking one Georgia Senate seat, but almost certainly not both. However, the lack-lustre showing of both GOP candidates, a renewed energy among Democrats and sheer confusion among Republicans as to if they should vote at all, has made this a real knife-edged race. Trump's ungracious slow-car-crash exit from the presidency has actually made it harder for the Republicans to hold the seats. If they fail, it will be straight-ticket Democratic government through the Executive and Legislature making it easier for Biden to deliver the policy agenda he wants around healthcare, immigration, taxation and foreign affairs.

But if the Republicans hold on to the Senate by winning even one of the run-off races, we're likely to see two years of legislative paralysis as a centrist Executive is opposed at every turn by hyperpartisan politics marshalled by Mitch McConnell. And the more Biden faces strong opposition from the right, the more he'll also have to contend with disquiet from the progressive wing of his own party. It would be a very tough two years to some very uncertain mid-term elections.