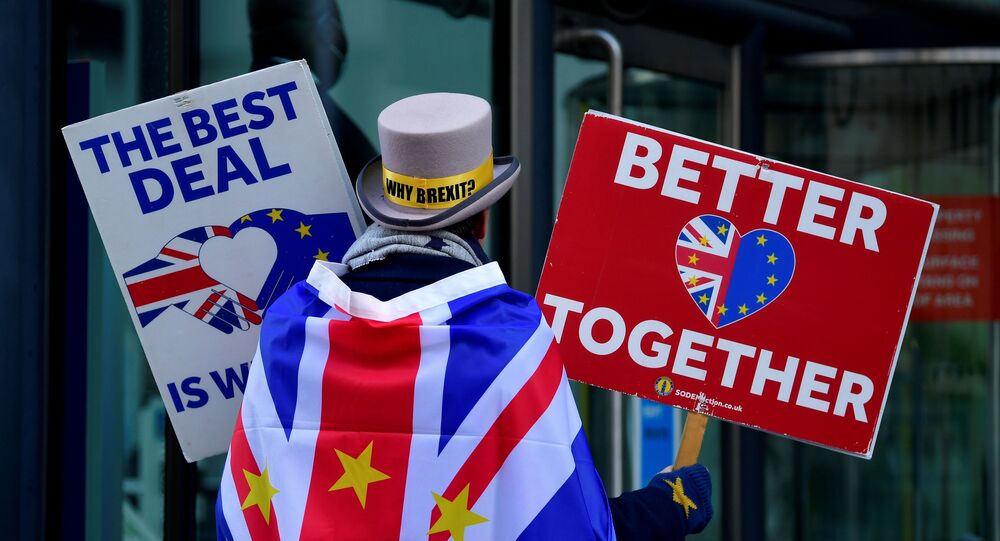 Boris Johnson and European Commission President, Ursula von der Leyen released a joint statement insisting it was their ‘responsibility to go the extra mile’ in an effort to agree a Brexit trade deal.

Their announcement attempting to offer hope to those who still believe that a deal is possible, looked very much like two parents going through a messy divorce and desperately trying to convince their children that everything will be okay. This came after Boris Johnson had previously threatened to pull the plug on negotiations if the EU failed to compromise.

Political analyst Keith Rowe reflects on whether a deal is still possible now that another deadline has passed by.

Sputnik: Why did the prime minister abandon his threat to pull the plug on negotiations?

Keith Rowe: The real answer, as far as I can see, is that he feels that for domestic political reasons, he has to be seen to be doing absolutely everything possible until the last possible moment to try and facilitate a deal. I believe and many other Brexiteers believe that just telling the EU that what they're doing isn't good enough, that they're not being flexible. They're not giving us the deals that they give others across the world. And they're being rude to us by not even taking phone calls. And all of these other things, we would say, we should just end it now. But I think he feels that he has to be seen by everybody to be doing everything possible until the last possible second.

© AFP 2020 / JOHN MACDOUGALL
As Post-Brexit Talks Resuscitated, What Headway Has Been Made And What Sticking Points Remain?

Sputnik: Was the joint statement issued with the President of the European Commission, a sign that a deal can still be negotiated? Or is it simply just delaying the inevitable?

Keith Rowe: I mean, if they said anything other than a deal can still be done, then they'd basically be ending the talks. So if they're going to continue the talks, they have to come up with a statement that says we still think something's possible. Whether anything is possible, is another matter. It looks that certainly, the EU is being incredibly inflexible, they're not prepared to give us a free trade agreement along the lines of the one that they have agreed with Canada or any of these other agreements. They still want the UK to be bound by EU regulations into the future. That's something that we are now regaining, our sovereignty, we can't agree to, I don't think any British government could agree to that. At least I hope they won't. So to be bound by the laws of foreign countries, that's not right. So we have to fully regain our sovereignty and fully regain our independence. And unless the EU are prepared to really recognise that, otherwise, they're not really recognising properly that we've left. If they're not prepared to recognise that, then a deal can't be done. But I think Boris is trying very, very hard.

Sputnik: How frustrating do you believe these ongoing talks are for the public and businesses who need to know what's happening before the 31st of December?

Keith Rowe: They're incredibly frustrating for people like me, and many thousands like me, and millions, I think, that have been campaigning to get us away from the EU for years and years. We achieved it several years ago. And we're still not there. But despite the ongoing talk in the media, and the discussions and everything else, which is frustrating in itself. When you run a business, the one thing that you really want is some sort of certainty as much as is possible. And these ongoing talks, and the lack of certainty stops businesses from planning, it stops them from investing. But also, that's certainly the case for British business. But it's also the case for EU businesses as well. So the EU by dragging these negotiations out, it's pure playing politics. The businesses in Germany, the car companies, the tourism, people in Spain, who are reliant on British tourists, the French wine and cheese producers, all of these people rely on Britain for a major part of their business. They want to know what they're doing, if there's going to be tariffs and that, so their products become more expensive. They know that it's going to be all the more difficult to sell those products into the UK, when we'll be able to buy equivalent products from elsewhere in the world without those tariffs. They need to know as much as British businesses need to know whether they're importing or exporting. So really, it's pure playing politics, and we're not being well served. And certainly the Europeans are not being well-served by their politicians, and we need to just move on and get a deal done and stop the uncertainty.

Sputnik: The likelihood is that we are moving towards trading on World Trade Organization terms. What would this mean for the British economy, as we've seen a lot of scaremongering as to the damage that this could potentially do to the UK?

Keith Rowe: Oh, it's project fear in overdrive that we're seeing at the moment. We're seeing the last thrashing about from the remainers trying to scare us away from Brexit. Whereas in fact, trading on World Trade Organisation terms trading as we do with other countries across the world, exactly the same way that we trade with the United States of America at the moment. It's nothing to be scared of, businesses don't have a problem doing this paperwork. They just need to know whether they're going to have to do this paperwork or not, and put the systems into place. There's no problem with trading on those terms. Certainly, if there's tariffs involved with importing European goods, the European goods are going to become more expensive, so we'll look elsewhere. But when we look elsewhere, the chances are we may be trading on World Trade Organisation terms with that country that we're trading with elsewhere, unless we've got a trade agreement with them. And Isn't it fantastic that this government has managed to agree, so many trading agreements in the last year that the mainstream media aren't covering this at all. But this is a major, major achievement of this government that we are having. And we're seeing trading agreements being signed with Japan, but all over the world, which is going to create millions of pounds, probably billions of pounds’ worth of business for the UK and jobs etc, that'll go along with that. And the mainstream media and project fear is trying to do all of that down. I don't think we have anything to be frightened of by trading on WTO terms. And in fact, if we just decided to have done that months ago we'd probably be a darn side better off.